With having had its biggest weekly tumble since June and hovering in the lower $1900s, the long-only camp must be fervently hoping for better times in oil and precious metals.

For what it’s worth, our advice is the same: watch the .

As US markets trudge back to their feet after the Labor Day weekend, the dollar held to its gains against the amid speculation on whether an accommodative move by the European Central Bank later this week could hit the euro.

The ECB policy will be announced on Thursday and most analysts don’t expect a change in the bank’s policy stance. But markets are looking to the bloc’s apex bank for a message on inflation forecasts and whether the euro has been stronger than it thought.

For background, the euro marked a two-year high just above $1.20 at the beginning of the month, until comments about its level from ECB chief economist Philip Lane knocked it lower.

“In our view, the dollar can lift further over the remainder of the week because of the possibility the ECB takes a sharper dovish turn.”

Gold And Oil Remain Under Pressure

That simply implied one thing: more woe for dollar-denominated commodities, which includes gold and crude. 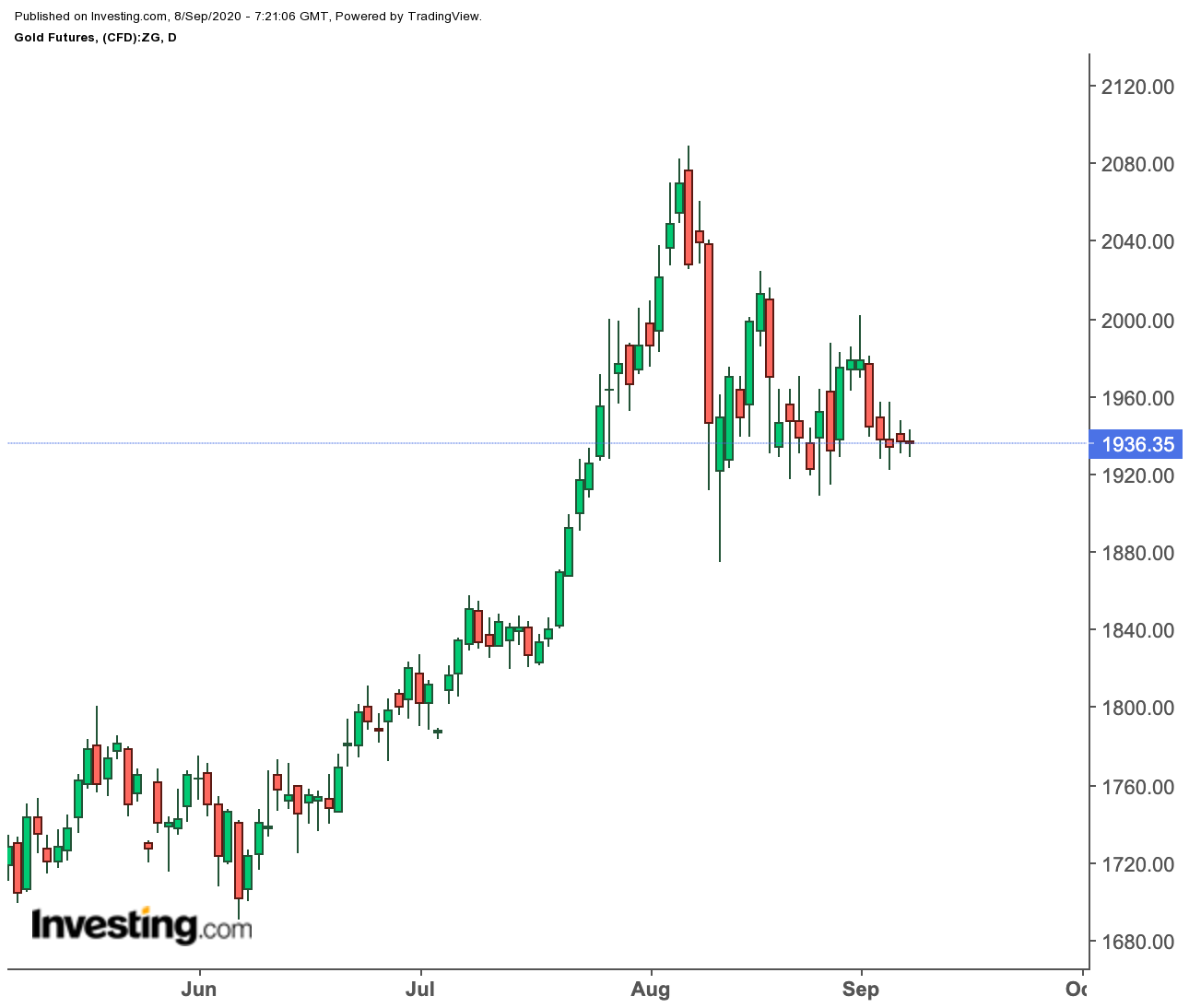 By Tuesday lunchtime in Asia, US gold futures’ benchmark December contract was down about 0.2%, hovering at just under $1,930 an ounce. At the time of publishing it had reversed higher. Gold had dipped back-to-back the past two weeks and had only had one positive week in the last six. Since hitting a record high of $2,089.20 exactly a month ago, December gold has lost almost $160, or nearly 8%.

That’s not all. Investing.com’s 1/5/15/30-minute charts for December gold, including those for the 1- and 5-hours timeframes, all call for a “Strong Sell.”

“The jury is out though on whether additional downside risks remain,” Jeffrey Halley, analyst for OANDA in Sydney, wrote in a commentary on gold. He added:

“Investors are content not to chase the market and pick up gold on dips. Gold is also lacking strong downside momentum, even if the rallies are shallow in scope. Realistically, any further downside will require a spike in the US dollar and a deeper sell-off of stocks on Wall Street. At this stage, that is a known unknown.”

Currency analyst Pablo Piovano said in a post on FX Street that the Dollar Index looked set to extend its bounce further up the 93-handle—which has become a bullish threshold for the greenback.

”Further gains are on the table and (it) face(s) initial hurdle around 93.50,” Piovano said, noting that despite some resistance to 93, the index has shown that it “manages well to keep the bid bias unchanged so far.” 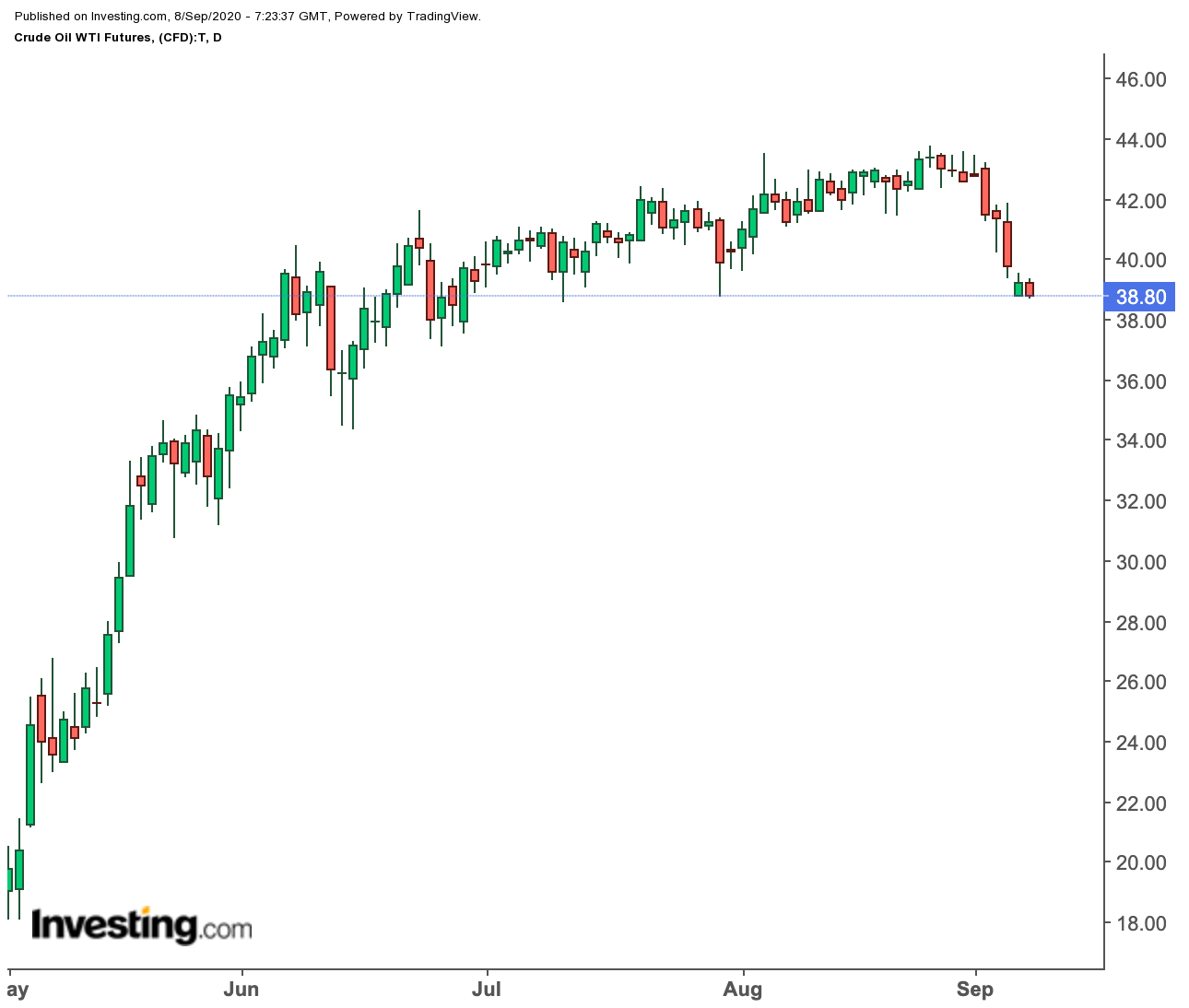 The dollar will likely weaken during the Federal Reserve’s Sept 15-16 monthly , where Chairman Jay Powell is expected to veer toward more accommodative policy, balancing some of the ECB’s dovish signals. But that’s still a week away, and there’s no telling what will happen to the dollar—and commodities—till then.

Disclaimer: Barani Krishnan does not trade or hold a position in the commodities and securities he writes about.