After months of attempts by market bulls to downplay it, the Delta variant of COVID-19 is beginning to show its most virulent impact yet on risk appetite, not just in stocks but also commodities.

Dominating Monday’s red ink in the raw materials space were the energy and metals, with prices tumbling 1.5% at one point in the Asian session despite OPEC+ announcing a much-awaited production agreement for August that allayed earlier concerns of disunity within the cartel. 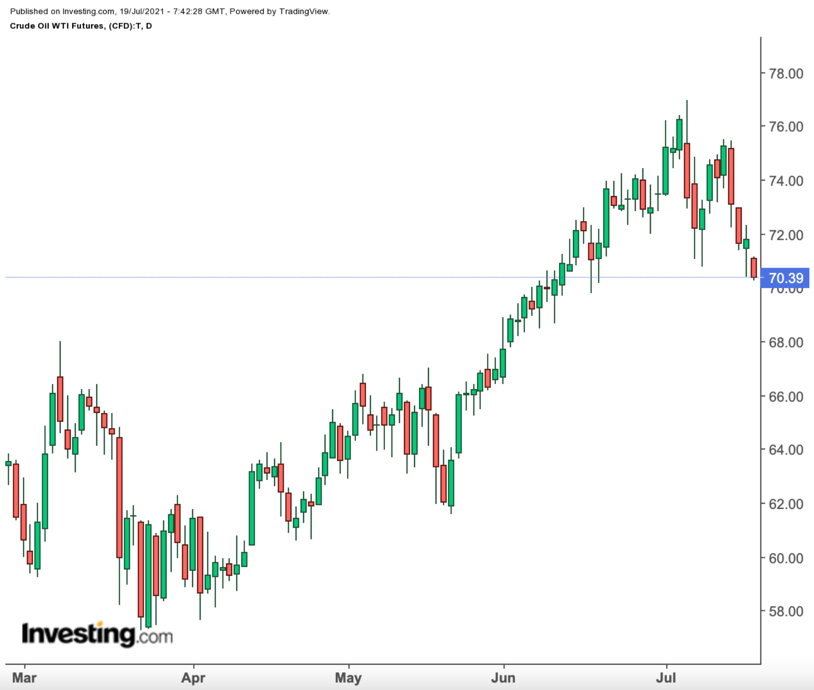 and started weaker as well, though they did not drop as much as , and . 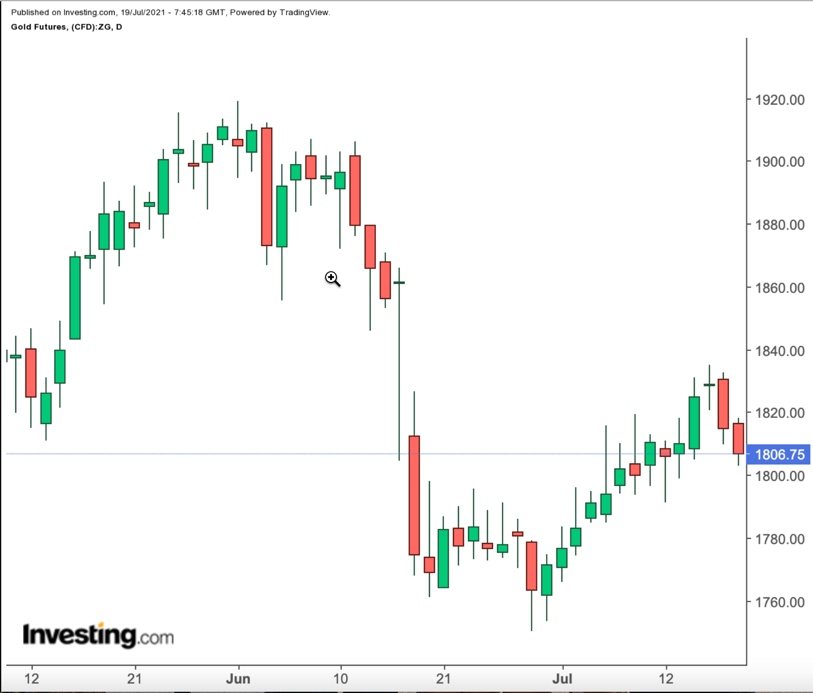 Energy and metals fell along with futures of the , and as the sat near its highest levels in months amid fears of the Delta variant’s growing spread.

Daily infections have been surging from the United States and Europe to Asia, and the global seven-day average of new cases each day is over half a million for the first time since May. Traders are holding their breath as England lifts most social curbs.

When the dollar rallies, commodities priced in the greenback become costlier to own for holders of other currencies, forcing a bearish outcome. The US dollar index hit an intraday high of 92.76, not far from last week’s three-month top of 92.832.

The Dominant Factor: COVID or Delta

National Australia Bank senior currency strategist Rodrigo Catril, on the bank’s morning podcast, made no illusions about what was driving the risk aversion in commodities and stocks.

“The market is really trading on the uncertainty in the air around COVID,” Catril said. “That is the dominant factor.”

Aside from the Delta variant, Friday’s surprising fall in the closely-followed US measured by the University of Michigan also unsettled investors, Catril said.

It is not known yet if the weak trend will persist through the week. On many occasions, markets have tumbled at the start of the Asian week, only to rally the same day or the next in Europe and the US. But even if a rebound were to occur, Delta concerns may not go away easily.

Notably missing will be the chatter of senior officials from the Federal Reserve who will observe a blackout on speeches and comments, leading up to the central bank’s monthly policy meeting on July 27-28. Fed speeches typically lend direction to currencies and metals during the trading day.

Thus, virus outbreaks and responses to those could dominate news cycles, as lockdowns tighten and expand in Asia.

Oil’s slump for the fourth time in five days was surprising, given that OPEC+ tried to do just what was needed to get a production deal out for August, while keeping its output well below demand levels.

The 23-nation OPEC+—which groups the 13 member Saudi-led Organization of the Petroleum Exporting Countries with 10 other oil producers led by Russia — said it will increase supply by 2 million barrels from August through December.

The deal to add 400,000 barrels daily each month over the next five months was precisely what the alliance tried to conclude two weeks ago, before the United Arab Emirates objected to having its baseline output—from which cuts are being calculated—stuck at March 2020 levels.

Under the revised deal, the UAE will see its baseline production increase to 3.5 million bpd from May 2022 from today’s 3.168 million.

OPEC+ also agreed on new output quotas as well for several members from May 2022, including the UAE, Saudi Arabia, Russia, Kuwait and Iraq. The Saudis and Russians who lead the cartel will see their baselines rise to 11.5 million bpd each from the current 11 million. The overall adjustment will add 1.63 million bpd to supply from May next year, according to Reuters calculations.

The net addition of 2 million barrels agreed over the next five months is still short of an estimated 3.5 million barrels of higher demand envisaged for the period. But that demand estimate was also made before the Delta-induced COVID escalation we’ve seen in recent weeks.

On the supply side, Iran’s first crude export from outside the Persian Gulf and beyond the Strait of Hormuz is also on investors’ radars this week. The shipment will leave from Jask in the Gulf of Oman, said Vahid Maleki, director of the Jask Oil Terminal.

Meanwhile, COVID-19 cases involving the Delta variant continue to increase and cloud the fuel demand outlook as some countries, including Australia and South Korea, reintroduced restrictive measures to curb their latest outbreaks. The UK on Saturday reported the highest number of daily COVID-19 cases since January 2021 ahead of England’s lifting of most restrictive measures on July 19.

In the United States COVID cases are on the rise again, exacerbated by the more transmissible Delta variant.

President Joseph Biden said on Friday his administration was bracing for a “pandemic of the unvaccinated” as latest breakouts appeared to mainly involve those who had resisted vaccination for political and other reasons.

Current and former federal health officials say that millions of Americans are jeopardizing their health, freedom and finances by not getting vaccinated and putting themselves at risk of the most infectious coronavirus strain yet.

Dr. Scott Gottlieb, who was commissioner of the US Food and Drug Administration during the Trump administration, told CBS’ Face the Nation on Sunday:

“Most people will either get vaccinated, or have been previously infected, or they will get this Delta variant.”

“And for most people who get this Delta variant, it’s going to be the most serious virus that they get in their lifetime in terms of the risk of putting them in the hospital.”

Dr. Francis Collins, director of the US National Institutes of Health, said earlier in the week that the United States was “losing time” in the race to get more than half of the population fully vaccinated before the end of summer. “The Delta variant is spreading, people are dying, we can’t actually just wait for things to get more rational,” Collins said.

Vaccines have been available to most Americans for months, but still only 48.2% of the country is fully vaccinated, according to the US Centers for Disease Control and Prevention—and the rate of new vaccinations is on the decline.

Meanwhile, case rates have been going up dramatically. In 47 of the 50 US states, the rate of new cases in the past week are at least 10% higher than the previous week, according to data from Johns Hopkins University. Of those, 35 states have seen increases of over 50%.

Relaxed rules in England have already been greeted by a mixture of nerves and excitement by London clubbers in the wee hours, but the day also begins with epidemiologists sceptical and the prime minister, finance minister and health minister isolating as cases spread.

“The Netherlands relaxed all restrictions and saw cases soar from 500 to 10,000 per day in two weeks, and the government has had to reverse course and is now waiting nervously to see what happens to hospitalisations.”

“The UK’s ‘freedom day’ today has some worried it could have a similar experience.”