Commodities Week Ahead: Could U.S.-China Tariff Pause Hit The Play Button On Risk?

The United States said on Friday it has reached a tariffs “pause” with China.

At this point, we need to hit the rewind button to go back to December 2018 to see what happened after presidents Donald Trump and Xi Jinping agreed to a 90-day trade truce to allow for further talks. There have been other ceasefires before between the two sides, but the December timeline is particularly significant for its duration.

China committed at that time to buying a “very substantial” amount of American exports. Indeed, by February, Chinese state-owned firms had bought at least 1 million tonnes of U.S. soybeans. Some news reports even indicated that the total purchase could have been as high as 2.2 million tonnes.

And until April, the two sides were still talking. U.S. Treasury Secretary Steve Mnuchin even described the discussions as “productive”.

Then, in May, the talks suddenly broke down.

Trump announced that the White House was raising tariffs on $200 billion worth of Chinese products to 25%, from 10%. The hike would take effect on May 10, the president said, adding that it was provoked by China’s attempts to “renegotiate” a tentative agreement.

China, for its part, announced that it would increase tariffs on $60 billion worth of U.S. goods from June.

Over the next few months, both sides showed little will to shift from their respective stance.

Then again, suddenly, the White House announced that talks would resume in October, and on Friday, Trump triumphantly said a partial deal had been achieved.

As of Monday, the trade war has hit its 463rd day.

The U.S. is applying tariffs to $550 billion of Chinese goods. China is retaliating with duties on $185 billion of U.S. products.

Based on everything that transpired between the two sides so far, there is no certainty they will reach a deal.

Trump said it will take three to five weeks to get a partial deal written and that it will cover intellectual property, financial services and $40-$50 billion of agriculture products. He did not say what the U.S will give up in return, only citing it as the first of a multiphase deal of up to three phases.

Is It Time To Hit The Play Button On Risk?

Oil prices jumped on Friday, experiencing their biggest weekly gain since the week after the mid-September attack on Saudi Arabia’s oil facilities, spurred by the partial trade deal announced by Trump. 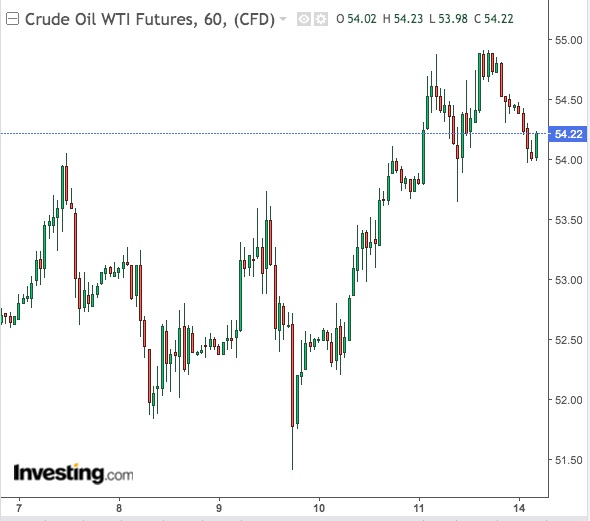 Despite the rally, some traders said they were poised to sell oil in the new week if the trade deal did not materialize and calm returned to the Persian Gulf. Another factor for Friday’s rebound had been Iran’s claims of a missile attack on one of its tankers on the Gulf, an event that quickly lost credence as conflicting details emerged on the nature of the attack.

“We’ve seen what’s happened so far with U.S.-China negotiations, and until it’s there in print and endorsed by the Chinese, it’s not done,” said John Kilduff, partner at New York energy hedge fund Again Capital. “The tensions in the Gulf have also dissipated almost as quickly as they began, so that’s another factor to consider.”

In Monday’s early trading in Asia, both WTI and Brent were down about 0.5%, indicating broader worries beyond the trade deal optimism that led Friday’s trading. 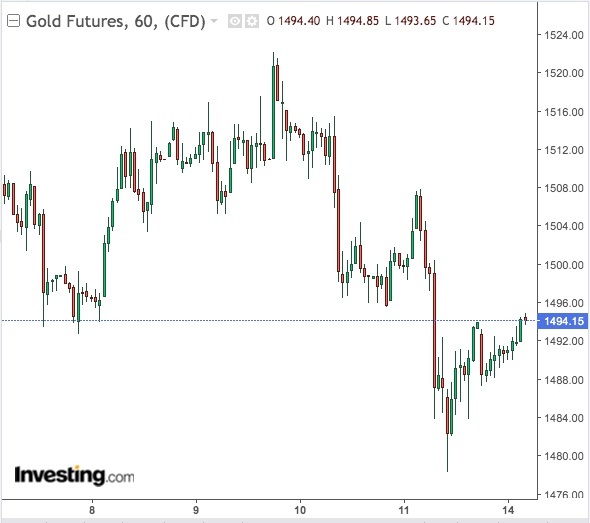 , the safe haven investors often turned to at the height of the trade war, stabilized in Monday’s Asian, trading at just $1,490 level. It had tumbled to a 10-week low of $1,478 in the previous session as risk appetite spiked across markets on expectations of an imminent U.S.-China deal.

OCBC Bank, in a note on gold, said while headlines on the potential trade deal were “encouraging” for risk, “we saw the same move before in April”.