Commodities Week Ahead: China Set To Sign, But Will Deal Help Gold And Oil?

According to reports, White House invites are out to 200 people and the stage is set for the U.S.-China Phase One agreement to be finalized. But with about 72 hours or more until the signing, commodity markets are keeping their hopes super low on what the deal will bring, particularly to oil and grains.

U.S. President Donald Trump and chief Chinese negotiator Liu He are to ink the 86-page pact on Jan.15, a week short of Trump’s two-year anniversary on Chinese solar panel and washing machine taxes that opened up a $735 billion tariffs war that has already cost American businesses $46 billion in real losses.

There’s been no official release so far on what the two sides will be signing on Wednesday.

Bloomberg filled in some of the blanks on the weekend, saying that Phase One will primarily focus on Chinese commitments to respect U.S. intellectual property and not to manipulate its currency.

The commodity aspect of the deal appeared to be $200 billion in new purchases that, according to Bloomberg, should “repair some of the damage suffered by farmers”. Uncoded, that could mean U.S. soybean imports by China, though commitments to buy crude oil could be part of the deal too.

Yet, traders had no idea of the timespan involved. Could it be $200 billion over four years — considering that Trump had been demanding $50 billion in farm purchases a year from the Chinese — or longer?

Until the details are known, it would be right for commodity traders to keep their expectations low over the deal, even if stock markets continue going gung-ho. Asian stocks opened up Monday, setting the potential for higher European equities and a continued rally on Wall Street, which hit record highs again on Friday before consolidating.

Commodity prices were, however, barely higher at the time of writing. , the benchmark for U.S. crude, was up 2 cents at $59.05 in early Singapore trade, remaining well below the bullish $60 mark. 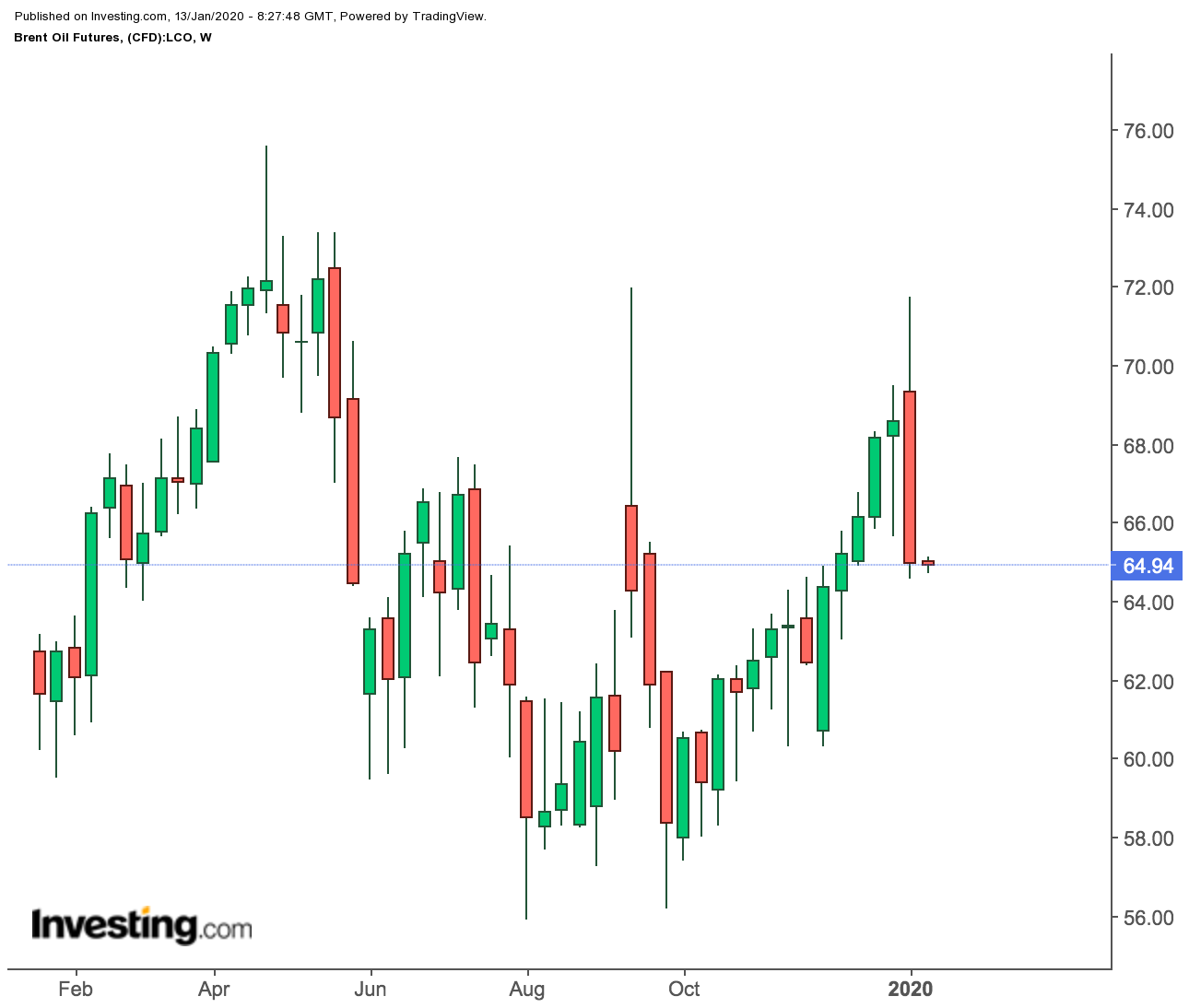 “I can see the roll-down continuing here in the front end of WTI for the time being,” Scott Shelton, energy futures broker at ICAP in Durham, N.C., said in a note on Friday, adding:

“On the Brent side, I think there are signs that the market could see some additional strength in spreads. Other than that, I expect the market to remain quiet.”

It has been a volatile couple of weeks into 2020 for oil, as the world came to the brink of a U.S.-Iran war and quickly moved away from it.

On the first Friday of the year, WTI hit eight-month highs above $64 as the U.S. killing of top Iranian general Qassem Soleimani in Baghdad put both the United States and the Middle East on high alert. Brent raced to a near four-month peak of $71.28 on Tuesday as speculation about an all-out U.S.-Iran war raged. 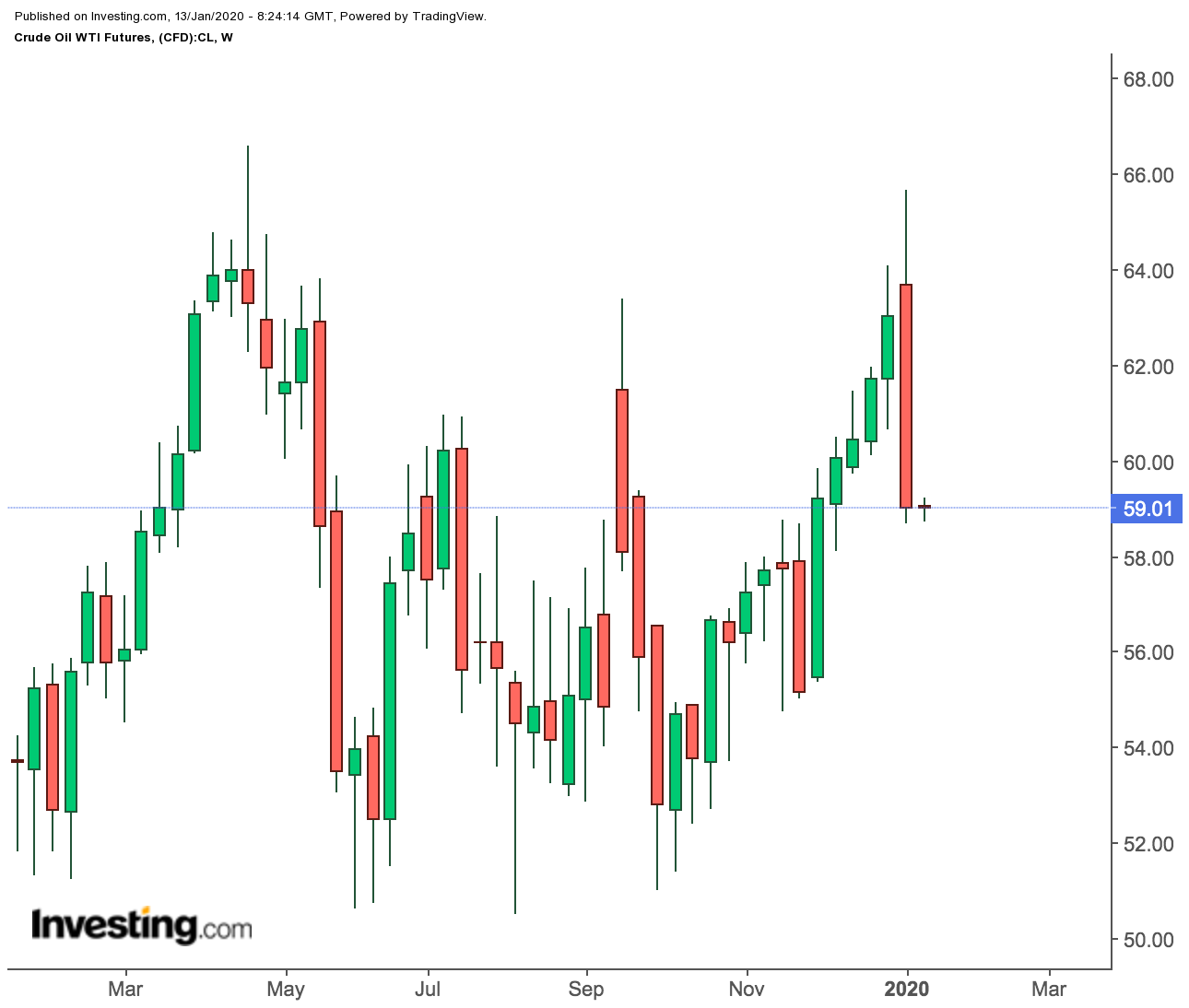 Yet, by the following Friday, WTI fell 6.4% on the week, posting its biggest weekly loss in more than six months, after Trump refrained from responding to Tehran’s rocket attacks on Iraqi airbases following Soleimani’s killing.

Brent slid 5.3% on the week as the loss of the U.S.-Iran risk premium wiped out much of the froth in oil.

While Soleimani’s killing did not directly impact oil production and shipment, crude traders had initially priced in a higher element of risk into the market. Both Iran and Iraq are members of OPEC, which together with Saudi Arabia, account for about 40% of the world’s oil production. Last week, crude tankers deliberately avoided the Strait of Hormuz around Iran to be on the safe side, traders said.

Adding to oil’s weight was the inventory surge over the past two weeks that brought the kind of builds to fuel stockpiles not seen for a year.

To those who braved last week’s $4 crash in WTI, the perplexing question will be: What weapons does the market have left, if any, to shoot back higher? The answer, of course, is OPEC production cuts. And — briefly, perhaps — the U.S.-China Phase One deal that will be signed this week.

As for the OPEC cuts, even if these were to deepen in the first quarter as proposed, Russia’s visible unease in sticking with the market manipulation planned by Saudi Arabia and other allies in the Organization of the Petroleum Exporting Countries is sending smoke signals of a different kind to the market.

If Russia loses its zest to stay in the so-called OPEC+ and contribute to the alliance’s production cuts beyond the first quarter, the market could be pretty much smoked. Moscow hasn’t shown any serious intent yet to quit the partnership.

However, it’s growing increasingly anxious about the loss in market share OPEC+ is causing Russian oil exports, especially with U.S. crude shipments hitting record highs at the start of the year. OPEC+ meets in Vienna on March 4-6 and Moscow could make its decision then.

Interestingly, the outlook for gold is as muddy as oil’s, although on the higher side. 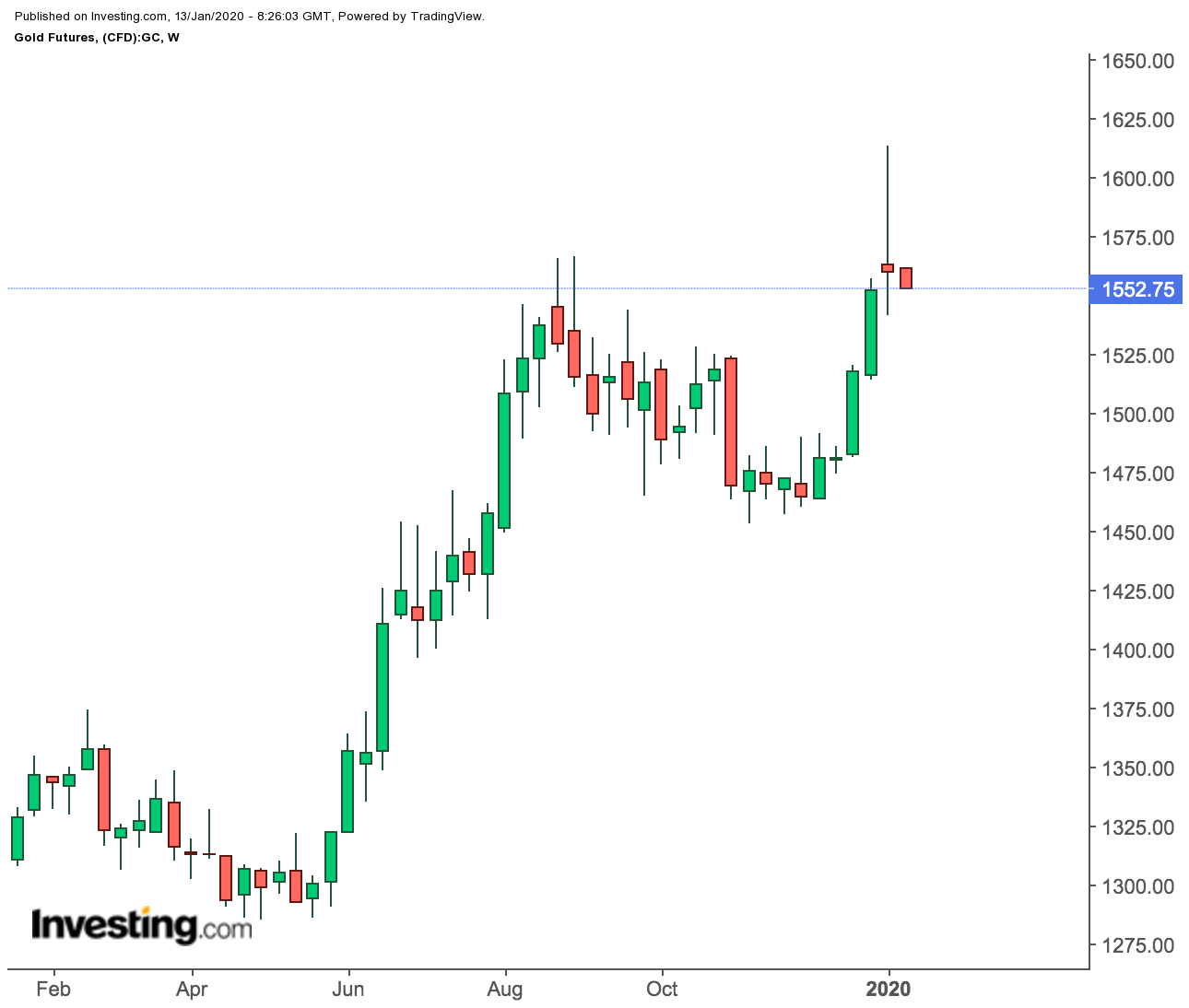 Like oil, gold spiked in the aftermath of the U.S.-Iran tensions. But even after the de-escalation, the yellow metal has remained up as investors sought a hedge against other risks, like the all-time highs in U.S. stock prices.

Analysts say that as long as Wall Street hits new peaks, one can expect gold to go higher, affirming the new relationship between equities and the safe-haven that bucks their previous inverse correlation.

Gold rallied on Friday as the three major U.S. indexes hit record highs on Friday, before Wall Street’s close lower. The briefly crossed 29,000 on Jan. 10 for the first time ever even after less-than-stellar U.S. jobs growth data for December.

While gold has typically gone in the opposite direction to stocks before, since last year the inverse correlation appears to have changed as investors sought an insurance against the possibility of a sudden reversal on Wall Street after a streak of record highs in stocks. Said George Gero, precious metals analyst at RBC Wealth Management in New York:

Here’s what’s in the phase one China ...