The Saudis have sworn to rebalance oil prices, but it could take just another U.S. stockpile build or Chinese buying of Iranian crude to send the market into a tailspin.

Gold, meanwhile, remains within striking distance of new 2019 highs at above or just around the $1,500 territory, with longs awaiting news of further troubles in the global economy or another Federal Reserve easing.

Any sign of China cutting back on and ramping up on Iranian purchases instead could be the bane of oil bulls as weekly stockpiles could start surging again in the United States. Last week was a clear example of what a drop in exports could do to U.S. crude balances: A 710,000-barrel decline from the previous week’s exports contributed largely to a 2.4 million-barrel inventory build.

Dominick Chirichella, director of trading and risk at the Energy Management Institute in New York, succinctly summed up last week’s action in oil by noting that the powerful rebound of the last two days was the result of the market correcting some of the overdone worries on demand, even as recession fears from the U.S.-China trade war drove prices down on the week.

In a note issued for Monday, Chirichella wrote:

“The battle that has been looming for months between the many geopolitical risks impacting supply versus the risk of a slowing of the global economy has seen the market mainly focused on the demand side of the battle.” 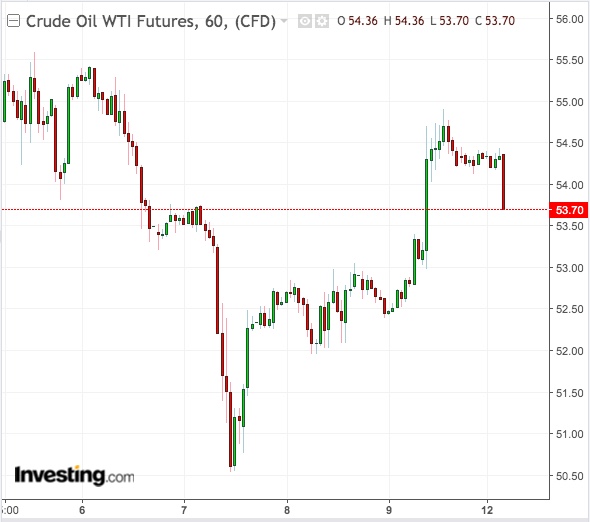 New York-traded crude gained nearly 7% in the last two sessions of the week, and U.K. oil almost 4% after Bloomberg reported on Thursday that Saudi Arabia plans to keep its crude exports at below 7 million barrels per day from September.

Despite the late rebound, WTI ended the week down 2% at $54.50 per barrel, as China’s devaluation remained the overarching factor for the market. Brent lost more than 5% on the week to settle at $58.53.

If the U.S. Energy Information Administration (EIA) issues another bearish dataset this week, and China throws another trade curveball at the U.S., the question is whether the optimism over Saudi and OPEC cuts will continue holding crude prices up.

Saudi Risk Needs To Be Seen In Perspective

To answer that, one needs to put the Saudi supply threat into perspective.

To achieve lower exports, Riyadh’s state-run Saudi Arabian Oil Co., known as Aramco, will reportedly cut customer allocations across all regions by a total of 700,000 bpd in September.

In good times, the Kingdom can produce up to 10.3 million bpd. Now certainly isn’t one of those times.

For North American customers, the Kingdom will send about 300,000 bpd less than they nominated for oil scheduled to load in September.

Reductions to European buyers will be larger and there will also be modest cuts to Asian buyers, although no specifics were available as yet.

As OPEC’s biggest producer, Saudi Arabia is also banking on the rest of the cartel to take its lead in slashing total supply beyond the 1.2 million bpd that the group had committed to through March 2020.

It’s important to note that much of the impact of the Saudi/OPEC move will be felt from September onward, although some of the action could trickle into the EIA weekly dataset as early as mid-August.

But China’s move into Iranian oil will likely be felt a lot quicker.

Reuters reported last week that China continued importing Iranian oil in July for a second month, after the end of U.S. sanctions waivers.

According to the report, between 4.4 million and 11 million barrels of Iranian crude were discharged into China last month, or 142,000 to 360,000 barrels bpd.

At last count, Iran was pushing out just about 100,000 bpd, versus the 2.5 million bpd it produced some two years back. With China’s support, Iran can quickly scale up its production, causing not just political headaches for Trump but also serious headwinds for crude.

Bank of America has warned that Brent and WTI price could potentially crash by $30 a barrel if China ramps up on Iranian oil.

Chirichella also noted another factor ignored by oil investors last week that could come back to haunt them: a dire reading of lower oil demand by the Paris-based International Energy Agency (IEA).

The IEA, which advises major economies, trimmed forecasts for oil-demand growth this year and the next, and warned that it may lower estimates further as the U.S.-China trade conflict drags on. World consumption increased by just 520,000 barrels a day from January through May—about half the rate seen the previous year, and the slowest for the period since 2008, the agency said.

But not all data in oil is bearish.

One feel-good factor for the market last week was the decline in U.S. oil drilling activity, where the national fell by six to 764 during the week ended Aug 9, touching a 18-month low. 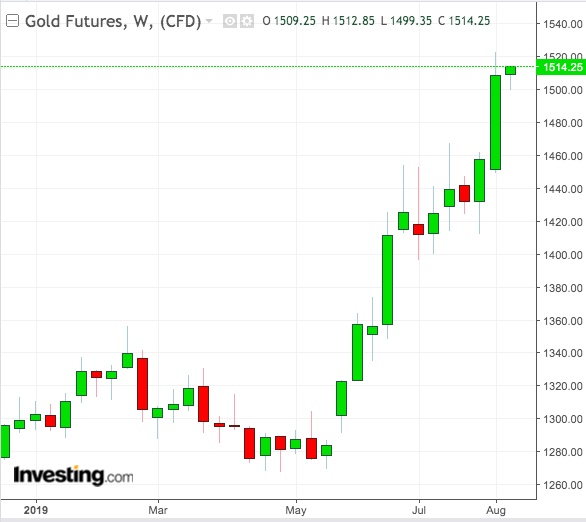 In gold’s case, a week of easing by global central banks to shield their economies from the yuan devaluation has given gold longs hope for further gains, despite the market’s retreat from six-year highs.

For the week, gold futures rose 3.5% and spot gold 4%, posting their largest gain in seven weeks.

Jury selection to start over in case ...