Commodities Week Ahead: All Bets Off As Trump Threatens New China Tariffs

One reason commodities came roaring back within a year of the financial crisis was the notion that wide-ranging public intervention had succeeded in lowering uncertainty and systemic risks in the financial sector. If Financial Crisis 2.0 happens under Donald Trump, we’ll be lucky to get such optimism at all.

The U.S. President’s propensity for on-the-fly policy making through his Twitter handle is one of the main sources of market instability now. From tweets telling OPEC to do this and that on oil, to constant pressure on the Fed to reduce interest rates, Trump has been a wildcard like none other across markets, commodities included.

He was in his element again on Sunday when he tweeted that he will hike tariffs on $200 billion worth of Chinese goods before the end of this week and target hundreds of billions more “soon”, after being annoyed by China’s attempts to drag out a trade deal between the two countries and “renegotiate” what had been agreed over the past five months. Since a tariffs ceasefire in November between the two sides, several rounds of talks have been held, with both governments talking up the possibility of a deal.

Thus, the latest curveball Trump has thrown at China greatly raises the downside risk for prices of oil, copper and soybeans, all of which China is a gigantic consumer of. Crude and soy prices fell about 2% in Monday’s Asian trade, while copper lost more than 1%, joining the global slide led by the 450-point tumble in Wall Street’s and 5% crash in Chinese markets.

Knowing how mercurial Trump is, he could come out with a reassuring tweet on China within a day or two, particularly if Chinese negotiators on the ground can convince their U.S. counterparts they’re serious on signing a deal the president will like.

There could also be damage control by Trump’s team—White House economic adviser Larry Kudlow was already implying on Sunday that the president meant to get the Chinese moving faster toward a deal, rather than acting on his threats to hit them. Such countervailing action could put markets back on their feet to recoup all they have lost before the week is through. 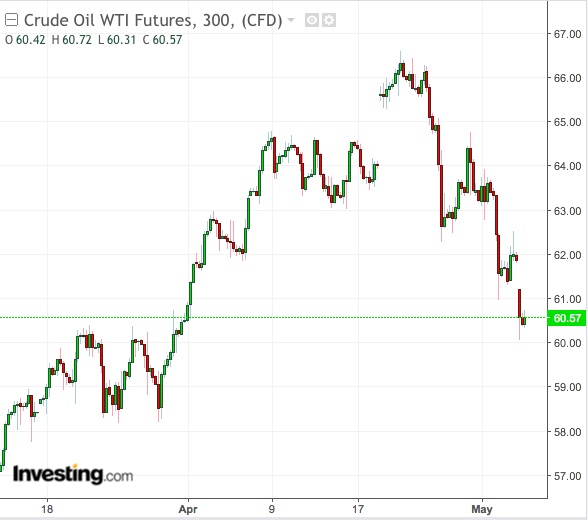 Yet, if none of these happen and markets remain agitated, with Trump continuing his anti-China rhetoric, then U.S. West Texas Intermediate crude will likely plumb to sharp lows beneath the key $60 per barrel support—levels last seen in March.

The Longer Tariff Threats Hold, The Worse For Commodities

That alternative may not be too bad for Trump, considering he’s been trying to push down oil prices for some time now, after his decision to double down on sanctions on Iranian crude exports did not elicit the higher production response he expected from Saudi Arabia. If anything, the Saudis’ most recent action in extracting top dollar from Asian refiners seeking replacement barrels of Iranian crude is proof that they have no intent of accommodating Trump’s wish for low U.S. pump prices ahead of his 2020 reelection campaign.

As of last week, Saudi Arabia’s Official Selling Price (OSP) for its Arab Heavy crude for June was near 8-year highs, as the country attempted to reinvigorate global crude markets weakened by an unexpected surge in stockpiles since March.

As for copper and soybeans, any failure in the trade talks is bound to hit their prices even harder. 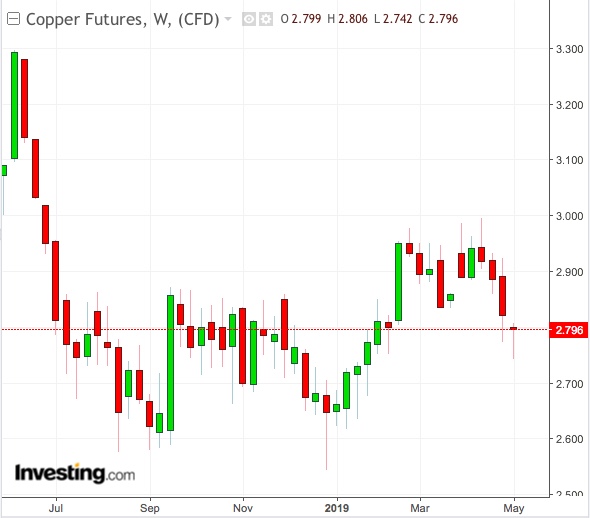 For nearly a year, copper bulls have been hoping for futures of the red metal to break above the $3 per lb resistance on New York’s Comex.

Investing.com’s Daily Technical Outlook has a “Strong Sell” on Comex , projecting a support as low as $2.699 per lb, versus Friday’s settlement of $2.819. 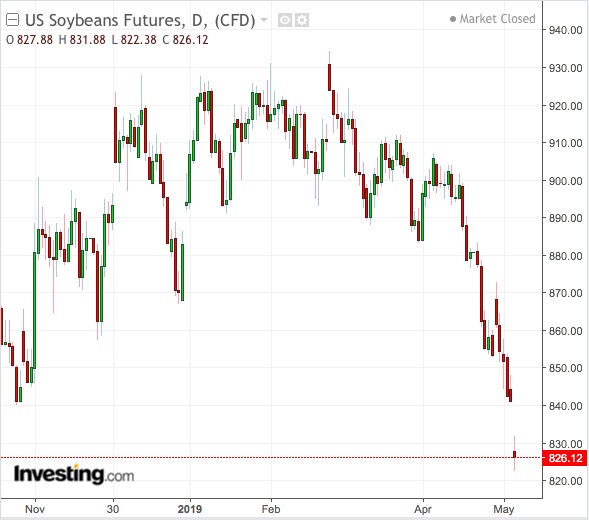 Soybeans futures hit 8-month lows of $8.2238 per bushel in Monday’s session. Year-to-date, they are down 7.5%, with the deficit expected to reach double-digits by the summer without a U.S.-China deal.

Here’s how China may retaliate to Trump’s ...

Gold Sector At Start Of Wave Of ...