Commodities Week Ahead: Algos To Keep Oil Up; Gold To Provide Hedge To Trade Hype

The trade deal headlines might have become tiring to the traders, but not to their machines.

Headline-reading algorithmic trading models will remain alert to words like “close,” “very near” and “good progress” that are associated with the U.S.-China talks this week as signs to continue buying into oil.

For a market that should have fallen on fundamentally bearish headlines about high crude supplies last week, oil actually rose after fresh hype by White House officials built around the trade deal. 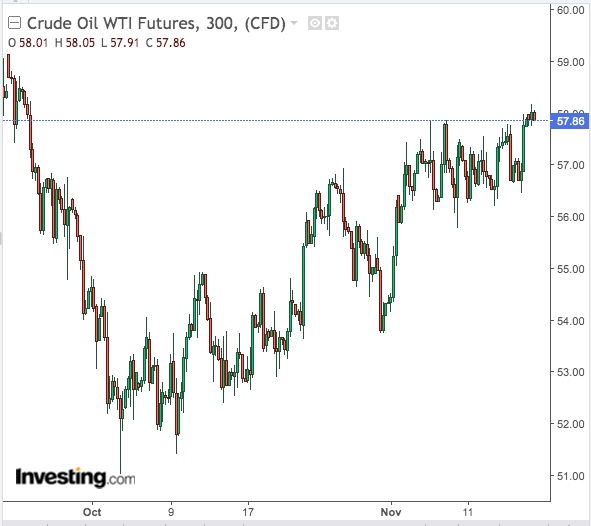 Before that, Commerce Secretary Wilbur Ross sent crude prices rallying at the end of the week by telling Fox Business there was a very high probability the White House will reach final agreement with China on their phase-one trade deal. “We’re down to the last details,” Ross said.

Ross and White House colleague Larry Kudrow, whose job is to advise President Donald Trump on the economy, also helped send all the three major stock indices on Wall Street to record high closings on Friday.

John Kilduff, founding partner at New York energy hedge fund Again Capital, said virtually every market from equities to forex, bonds and commodities were bought on the notion that a trade deal had to happen—and only headlines containing words like “no deal,” “no consensus” and “delayed deal” could derail the rally.

“There’s currently no hype like this. The humans might be circumspect to the very unnatural feeling of this bull market but not the machines, which are programmed to move with the herd.”

“The algos are reading and the algos are buying because that’s what they’ve been programmed to do. Of course, they’ve in-built technical limits and losses, but those usually only trigger when the trend definitely moves the other way. And there are no signs now of that happening or for administration officials on either side willing to let that happen.”

In the absence of a deal, we can presume that Ross and Kudrow will continue their weekly appearances on Fox to keep alive the hope of an imminent agreement. This will likely extend until the eve of Dec. 15—the deadline for tariffs on China, threatened by Trump.

At that point, there could be another deferment to the scheduled tariffs.

And all the while, crude prices could continue rising.

TD Securities said U.S.-China trade optimism was certainly a driver for the surge in buying. But the group also expressed a worry about growing crude inventories in the United States.

But Oil Supplies Are Already Growing

“We suspect that exposure will tilt toward the shorts, as H1-2020 will see significant surpluses and lower prices.”

H1 2020 could mean anytime between January and June. In the short-term, there are already signs of higher supplies. The Energy Information Administration’s latest weekly reading on came in a third higher than market expectations. The EIA also cited a weekly of nearly 2 million barrels, versus the drop of slightly more than one million forecast by the market.

If that wasn’t enough, the EIA’s Short-Term Energy Outlook, published separately, said U.S. crude oil output is expected to hit a record of 13 million barrels per day this month and grow more than expected in 2019 and 2020. The weekly report already estimates output at 12.8 million bpd.

Casting a further pall on the market, the International Energy Agency estimated that non-OPEC supply growth would reach 2.3 million bpd next year compared to 1.8 million in 2019, citing production from the United States, Brazil, Norway and Guyana.

However, instead of paying heed to those numbers, oil traders went instead with OPEC’s suggestion that U.S. shale oil production might be collapsing.

OPEC’s premonition on shale came from Secretary-General Mohammed Barkindo, who told CNBC that after talking to “a number of producers, especially in the shale basin, there is a growing concern by themselves that the slowdown is almost graduating into a fast deceleration.”

Barkindo added that these companies “are telling us that we are probably more optimistic than they are, considering the variety of headwind challenges they are facing.”

In reality, what OPEC needs to address is the persistent overproduction by serial offenders such as Nigeria and Iraq—even non-member ally Russia—that make it a challenge for the cartel’s de-facto leader Saudi Arabia to stick to the 1.2 million barrels-per-day cuts agreed nearly a year ago.

With the mega stock sale of Aramco, the Saudi state oil company, just around the corner, the kingdom prefers to enforce the existing production pact and somehow keep prices up, without getting into deeper cuts.

OPEC members know that when they meet in December, there very likely won’t be a decision for deeper cuts. But if that becomes a mantra now, it could pressure prices lower, especially with the absence of a U.S.-China deal. So the cartel talks down shale, and the market buys that.

In the case of gold, it acted more like the contrarian bet to the U.S.-China optimism that it was, with prices just slipping last week—rather than tumbling—on the remarks by Ross and Kudlow. 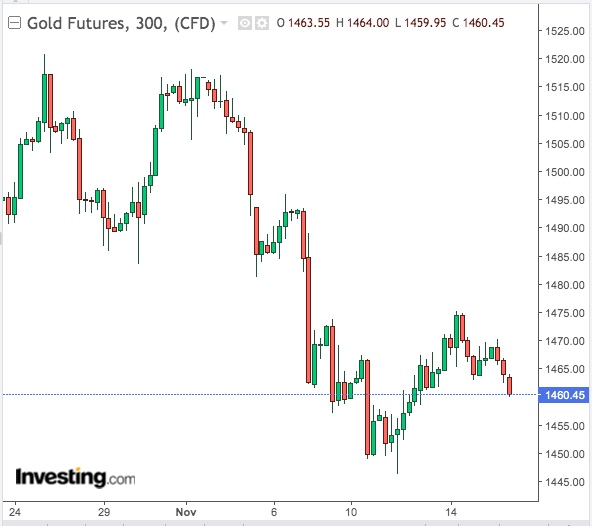 The yellow metal fell off the bullish $1,500 perch early this month after Federal Reserve Chair Jay Powell suggested that the central bank’s third quarter-point rate cut in October would be its last for the year.

TD Securities said while gold funds may have liquidated some of their long holdings in the yellow metal, “the bar is high for machines to add further selling pressure, and aggregate open interest still sits at all-time highs.”

“Our estimated breakeven entry point for the bulls stands in the $1440/oz range, which suggests that a break below that range would be required for prices to be dragged lower by a decline in open interest.”