Platinum group metals (PGMs) are rare, making them precious. The PGMs have many industrial applications because of their density and high melting and boiling points. and are the leading precious metals that trade in the futures market on the CME’s COMEX division together with futures.

Meanwhile, and trade on the CME’s NYMEX division alongside . PGMs relationship with energy is because the metals are critical for the crude oil refining business and are requirements for automobile catalytic converters. , a byproduct of platinum production, only trades in the physical market. PGM production comes primarily from South Africa and Russia. In Russia, they are a byproduct of nickel production.

In early 2021, palladium and rhodium prices rose to all-time highs. Platinum appeared to breakout to the upside, trading to its highest price since September 2014. The prices of the metals with high resistance to heat have been melting over the months. Over the recent trading sessions, they fell to new lows in 2021. 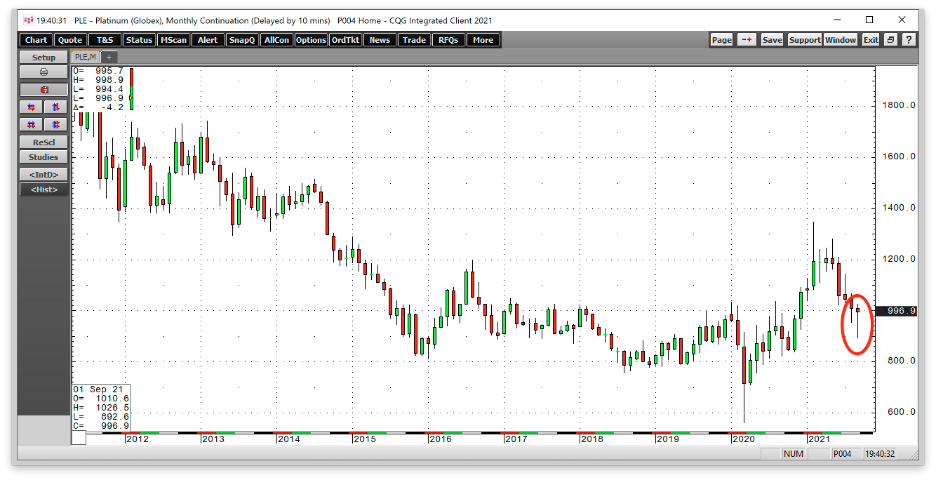 As the monthly chart highlights, nearby NYMEX platinum futures reached a low of $892.60 on Sept. 20, the lowest price since November 2020. Platinum has been a laggard in the precious metals sector over the past years as it underperformed gold, silver, and palladium, the other precious metals that trade on the CME’s COMEX and NYMEX futures exchanges. Platinum bounced and was back at the $1000 level on Sept. 22. 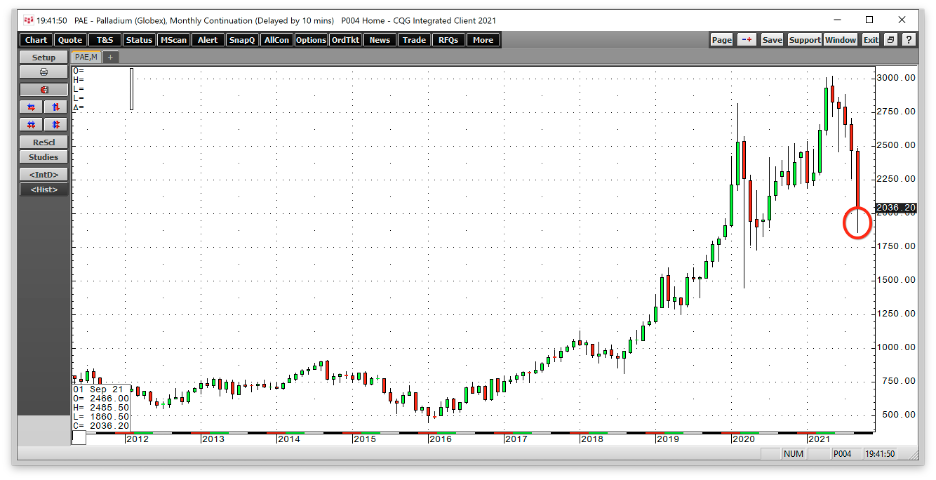 The monthly chart illustrates the decline that has taken palladium futures to a low of $1827.50 on Sept. 20 on the December NYMEX futures contract. Palladium’s parabolic multi-year rally ended with the metal becoming a falling knife, dropping like a stone over the past five consecutive months and losing 39.5% of its value at the recent low. Palladium was back over the $2000 level on Sept. 22.

Rhodium is a byproduct of South African and Russian platinum production. The precious and industrial metal peaked at the $30,000 per ounce level earlier in 2021. Over the past months, rhodium has also dropped off the side of a bearish cliff. Rhodium was trading at the $14,000 per ounce level on Sept. 22. 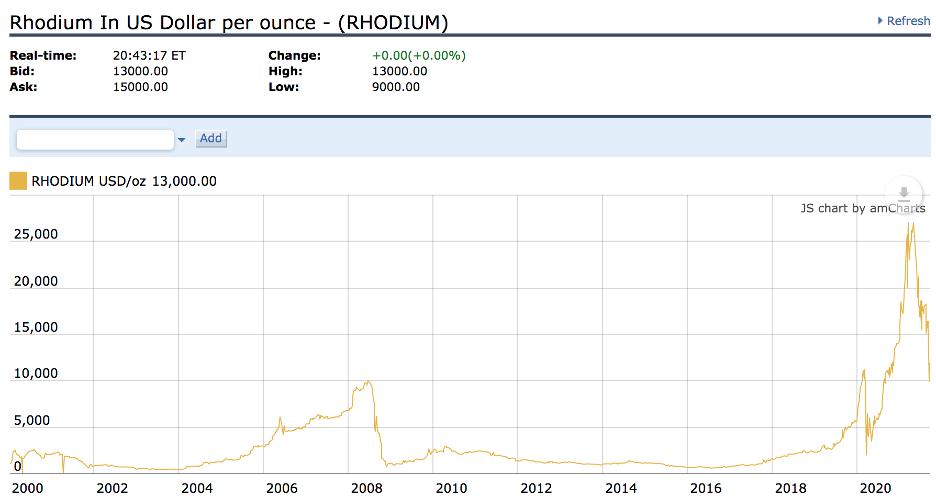 The chart shows the decline in rhodium’s price after its all-time high. Rhodium recently traded below the $10,000 level, losing two-thirds of its value.

Cleaning toxins from the environment via the PGMs

Bull markets rarely move in straight lines, but the platinum group metals have suffered from a fundamental issue as the semiconductor shortage has caused the demand to evaporate.

Car manufacturers canceled chip orders during the height of the global pandemic as they expected the demand for new automobiles to decline. The automakers miscalculated on two fronts. First, car demand increased, and second, bottlenecks in the supply chain and issues facing global semiconductor manufacturers caused a severe chip shortage.

As the automakers looked to purchase chips required for their production lines, they found themselves at the back of the queue in the face of a shortage. General Motors (NYSE:) shut down production at most of its plants in North America in early September. Over the past weeks, they extended the shutdowns through mid-October. Other carmakers are facing the same production problems because of the chip shortage.

Meanwhile, platinum group metals are a critical component of automobile catalytic converters that cleanse toxins from the environment. Prices moved to highs as the world addressed climate change. Palladium is the metal of choice for gasoline-powered cars. The shutdowns at car manufacturers have created a shortage of new and used vehicles. It also caused platinum group metals inventories to build as the demand evaporated, sending prices plunging over the past weeks and months.

The GLTR ETF has a 20% exposure to palladium and platinum

Eventually, car demand will come storming back with a vengeance. Pent-up demand for new and used cars will create a frenzy of buying when prices come down as the chip shortage ends and new vehicles come rolling off assembly lines. The greener path in energy policy in the US and worldwide should once again cause the demand for platinum group metals to rise. 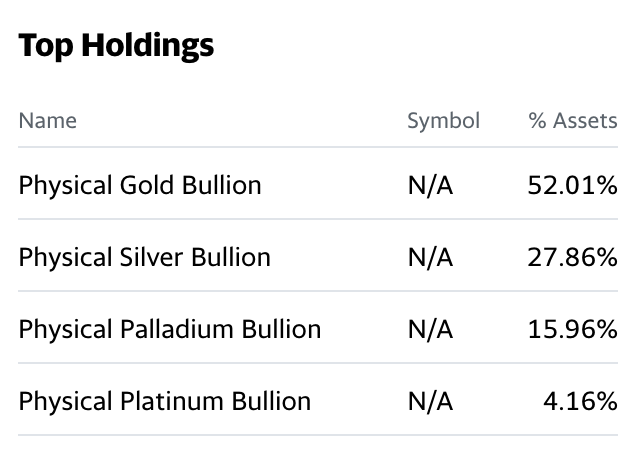 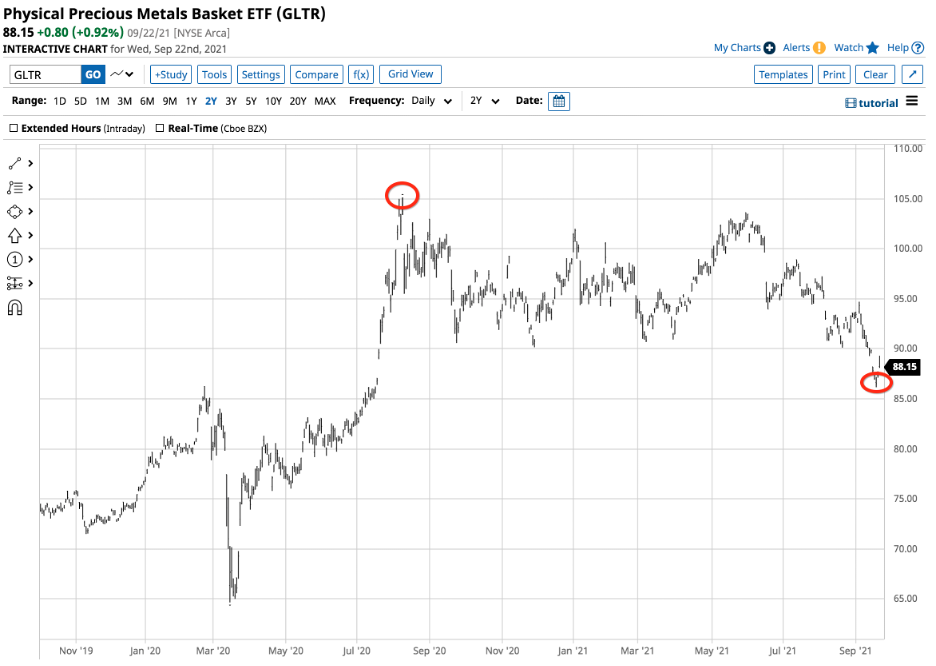 Platinum and palladium became falling knives in late September 2020. Picking bottoms is dangerous as markets often fall far lower than logic, reason, and rational analysis dictates. However, the green path for energy production and consumption and an overall inflationary trend in markets across all asset classes make the odds of finding significant bottoms high. As of Sept. 22, despite the bounces from the lows, the price action remains ugly. When prices stabilize, platinum and palladium could be the metals of choice as they have declined to levels that offer compelling value for the future.