As August trading bows out at the close of today’s market, and September slips into its place, it’s not just investors in stocks, bonds and FX who are filled with dread about the final month of Q3.

Players in commodities, some of whom have done as well as their peers in equities by riding this year’s milestones in oil, metals and select crop prices, are just as worried about when the Federal Reserve will begin squeezing the “free money” it has been dumping on the economy (and markets) over the past 18 months in the name of COVID protection.

The Index, which tracks 19-commodities, is up 31% for the year. Wall Street’s index is, meanwhile, up just 21% since the start of the year.

The so-called taper of the Fed stimulus—and when that will come—has been an on-off terror for all markets since the year began. Speculation over this has been universal, given the influence that one particular asset—the —will have on others (specifically commodities) when the Fed’s monthly spending of $120 billion starts getting tightened.

While Fed Chair Jay ’s wishy-washy comments at last week’s Jackson Hole event will prompt more reading of taper-tea leaves in this Friday’s US for August, technical charts tell a potentially different story for each major commodity in September.

Sunil Kumar Dixit, chief strategist at Kolkata-based SK Dixit Charting and a regular contributor to Investing.com, breaks it down for us, by each commodity subset and select market:

is up 42% on the year. But it is poised to finish August more than 6% lower, after failing to break above July’s high of $77.17. Instead, it broke down below the previous low of $65.38, showing weakness and correction. 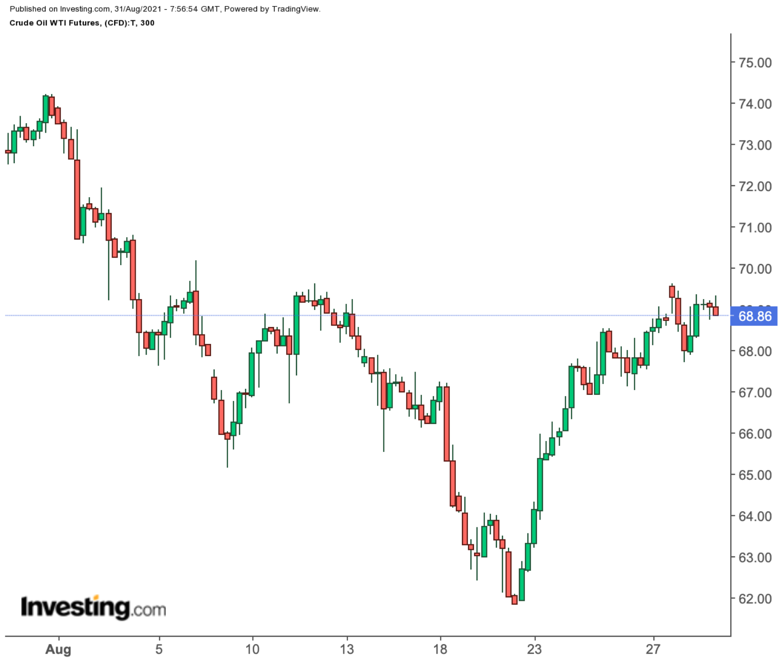 Notwithstanding this, WTI’s weekly chart shows the Stochastic RSI oversold. This may bring technical bounce back to WTI, lifting it to $73.50 in what would be a catalyst for bulls.

is the best performing commodity of 2021, returning almost 70% year-to-date from a combination of weather extremities since spring and underwhelming production. 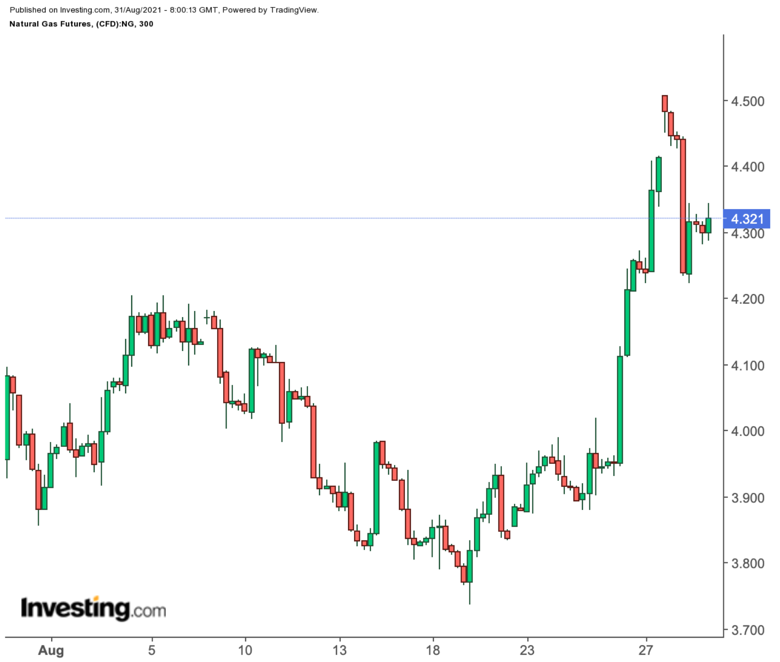 Natty, as it’s known in trading lingo, tested the 200-Simple Moving Average on the monthly chart at 4.43, touching the 4.50 psychological mark before stabilizing at 4.29.

Settlement below the 200-SMA on the monthly chart at 4.43 may push gas prices lower towards static support at 3.40. Despite this, natty’s Stochastic RSI reading of 89/84 has ample room for continuation of its upward move.

The , which reflects real-time trading in bullion, is down just over 4% for the year even as it is poised to finish August up less than 4%. 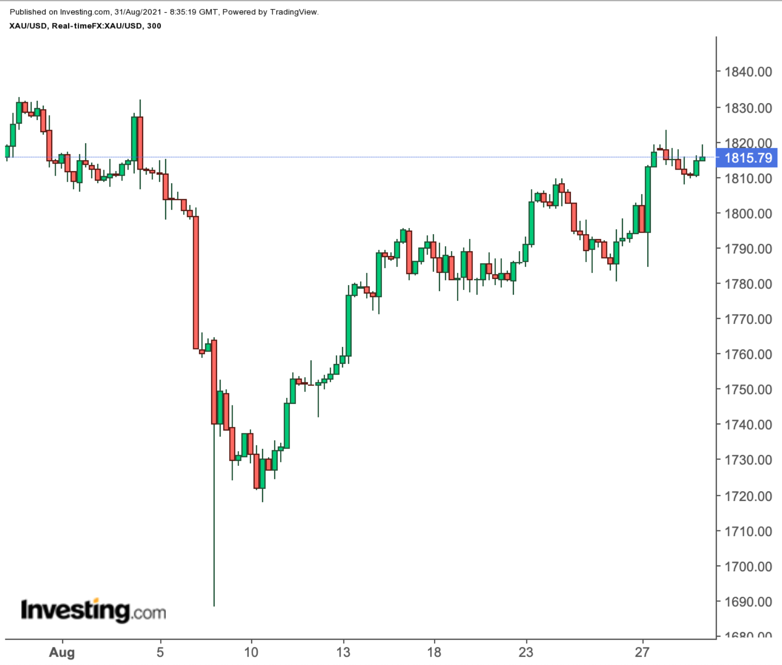 Since January, gold has been on a tough ride. After initially bottoming out at under $1,675, gold appeared to break its dark spell with a bounce back to $1,905 in May. From there, it saw renewed short-selling that took it back and forth between $1,700 and $1,800 for a while before another move near mid-$1,600 in August.

In continuation of its ascending support trend line aligning with $1,670, $1,676 and $1,688, the spot price of gold has bounced back upwards. But it has been unable to break above July’s $1,834, the level which is the yellow metal’s immediate challenge.

futures on New York’s COMEX are up by around 24% year-to-date, but off nearly 2.5% for August.

The red metal’s prices hit a record high of $4.89 per lb in May, before clambering down steadily on a clampdown in imports by top consumer China.

Beijing has shrewdly used copper in its stockpile in recent months to force prices of the metal down and put a lid on inflation. It announced last week that it would release a third batch of metals, including 30,000 tons of copper, from state reserves on Sept. 1 as part of an ongoing campaign to control prices and prevent commodities inflation from hurting growth.

futures on the Chicago Board of Trade had a phenomenal run for the first four months of the year, gaining 17% in all, after a previous six-month rally that delivered 55%.

Since April, however, soybean prices have collapsed on oversupply, with the oilseed now flat on the year and down 2.8% for August.

Barring more oversupply concerns, technical price recovery can push soybeans up, with $14.68 as the first upside target, which is yet another 50% of Fibonacci level retracement measured from $16.68 to $12.68.

on ICE Futures US is the best performing crop for 2021, up 55% on the year and gaining almost 10% in August alone.

While it did see a bout of volatility in mid-August, arabica’s path upward has been otherwise little challenged, helped by a crop freeze in Brazil’s top coffee producing region.

Crop fundamentals will need to play their part too, although overbought stochastics that read 97/97 on the monthly chart can limit arabica’s upside and force a break below $1.81, that can open the gates for a further downside of $1.68 to $1.62.

Pentagon: ‘Possible’ US will work with Taliban ...