With just hours to go before the close of June trading, this quarter’s list of best and worst performing commodities is almost final, and a heads-up before you read on: Some of these aren’t your usual A- or Z-listers in raw materials.

At the apex of commodity returns for the quarter sits . The fuel that powers, cools and heats some 40% of America is up 42% actually for March to June. That was just shy of its 2020 third quarter return of 44%. 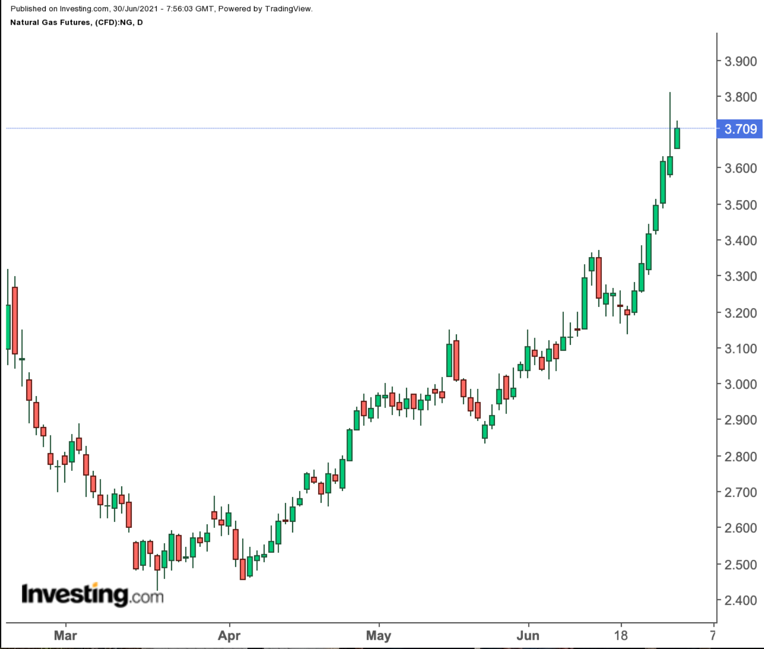 At the bottom of the quarterly heap is , which is down 25% for the March to June period. For this month itself, lumber has fallen 40%. 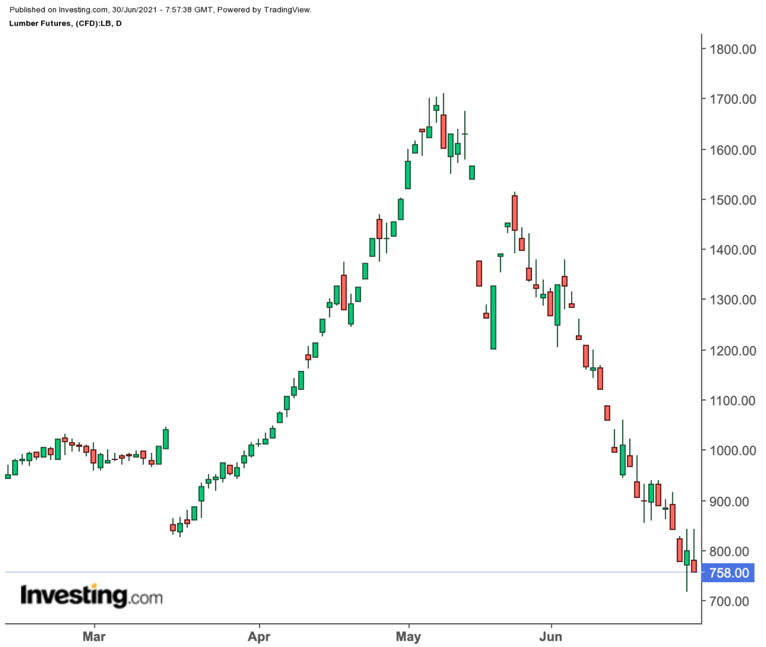 Natural gas aside, many raw materials are at multi-year highs, including , , and .

The for commodities is up 14% for the quarter and almost 3% for June.

It has been a phenomenal year for commodities in the US and other economies. Raw material prices were depressed for months by the coronavirus pandemic enforced lockdowns, but they have been making a strident recovery as global vaccination drives boost demand. Broken supply chains and other bottlenecks in shipping and logistics are adding to the upward price pressure.

The boom is reminiscent of the last supercycle in commodities, which began around 2000 and lasted until 2014, with China vacuuming up the bulk of the raw materials produced and shipped across the world. Today, the Chinese are again buying mountains of everything from oil to metals and grains.

Back to natural gas—that it had higher gains this quarter than is not something many may have expected.

Weather is such a dynamic thing that predicting the correct number of cooling degree days in the summer and the resulting gas burns by utilities and the balance they would inject into storage is as much an art as science.

Natural gas is often known for volatility, rising and falling by extreme levels within short spans. From a heyday pricing of $13 per mmBtu, or million metric British thermal units, in 2008, it has even traded under $1.50 just a year ago.

A steady vertical trajectory isn’t exactly an inherent nature of this raw material, known as the “Bucking Bronco” of energy commodities.

Yet despite ending the first quarter with a March loss of 6%, natural gas blew past all expectations over the last three months.

It picked up 12% in April, on late snow storms and other cold events; followed that up with a 4% rise in May and delivered a knock-out 22% gain in June as pre-summer heat built early across the United States.

Natural Gas Has Taken On ‘A Life Of Its Own’

As Gelber & Associates puts it, the bull run in natural gas “has taken on an impressive life of its own.”

“The front-month has shattered resistance near $3.631 mmBtu at previous winter highs and there remains little to stand between it and $4.”

“The current rally remains technically driven as traders aim to blast past local peaks of $3.84/mmBtu, noted in late December of 2016 and 2018. The front-month currently lies at $3.71, after reaching as high as $3.81 earlier this morning.”

This month’s rally itself will give time to producers to accommodate current demand levels as well as realize sizable profits in the short term, the consultancy observed. It concluded:

“Regardless, the higher that prices rise in this most recent rally, the more adamant the reaction from producers will be, and the less likely the market will find itself in an undersupplied, high price winter scenario.”

On the oil front, US.crude returned 23% for the quarter after a near 11% gain in June. 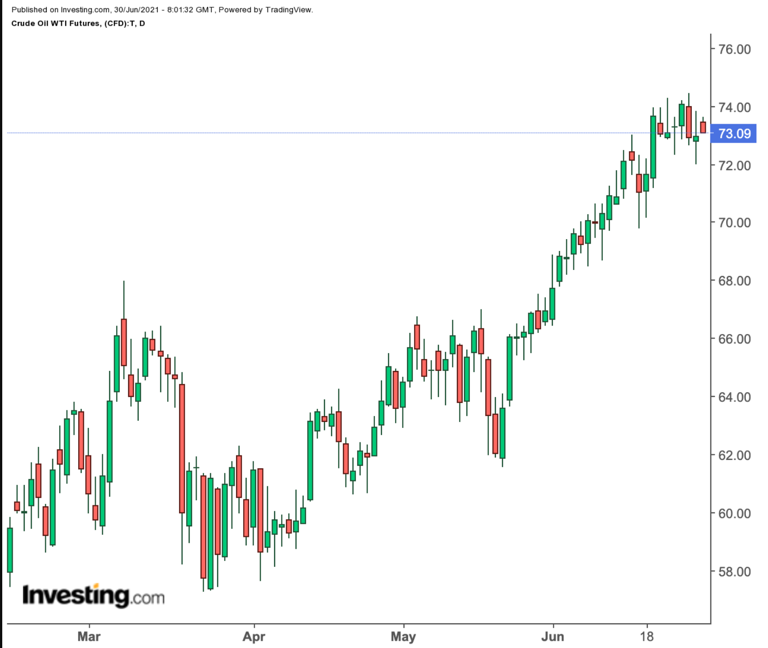 For the year itself, US crude is up by a blockbuster 51% (just 1% behind , which has jumped 52% on the year on outsized exports of pork products to China, whose hog herd has been massively impacted by the African Swine Flu. The other commodity with a year-to-date gain above 50% was , which rallied on a shortage of the soldering and food foil/canning material).

Lumber Plunged As Fast As It Rose

Lumber has given up nearly all of its 95% gain from earlier in the year after US builders snuffed the rally in the home construction commodity by simply choking activity.

Since reaching an all-time high of 927,000 units in October 2020, the annual pace of new home sales in the United States has fallen around 20%.

Reason: Fewer houses have been coming on the market each month, despite roaring demand.

Part of it has to do with pricing, which has hit record highs month after month. The Mortgage Bankers Association estimated that the average loan size for new home applications again rose in April, to $377,434, from $384,000 in May.

The other reason is the deliberate slowdown in activity by builders unable to stomach the ludicrous spike in prices of lumber, which reached above $1,711 per 1,000-foot board at the peak of its rally six weeks ago—up 95% since Dec. 31 and 417% higher from a year ago.

Just about three years ago, lumber fetched as low as $300 to $500 per 1,000 foot board. Then, the Trump administration slapped a 24% tariff on softwood lumber imported from Canada, the largest producer of the commodity in North America. That sent prices above $600 the first time in mid-2018.

The perfect storm came in July 2020, when supply bottlenecks from the pandemic squeezed delivery times for an already limited commodity. Lumber hit above $1,000 the first time in September and continued making new four-figure highs through early May.