I have been trading commodities since the very early 1980s, when I began my career at Philipp Brothers, which came Salomon Brothers, and then Citigroup. In the 1970s and 1980s, Philipp Brothers was the leading raw material merchant with offices worldwide. Where the company did not have a formal office, it had agents. After working for the company during my high school and college years, I decided to forego law school to take a job in the telex room. In the early 1980s, Philipp Brothers continued to groom the next generation through a lehrling program. Lehrling is German for an apprentice.

After delivering telex messages to the traffic and trading departments, which was an education in the commodities the firm handled, I moved to the traffic department. I executed trades by shipping and arranging operational logistics for the items bought and sold by the firm. After a few years, I moved into the trading area, where I rose to run several commodity businesses for the company in the 1990s.

The education at Philipp Brothers comprised everything from physical commodity trading to derivatives. I learned that each commodity had distinctive characteristics and that market structure is a critical part of fundamental analysis that provides clues about the path of least resistance of prices.

Technical analysis is a critical part of my overall market calculus as it is a sentiment barometer that pushes prices higher or lower. Fundamental analysis can reveal stages of a pricing cycle that create a surplus or deficit conditions in raw material markets.

Raw materials experience price cycles. They tend to decline to levels where production falls, inventories drop, and demand rises, creating bottoms. During bull markets, prices move to levels where producers increase output, inventories begin to build, and demand drops, creating tops. Commodities are volatile assets. Prices can rise or fall to illogical, unreasonable, and even irrational levels at tops or bottoms. Two examples are the market in 2011 and the market in 2020.

The semiannual cotton chart highlights the price spike to $2.27 per pound. ICE cotton futures had never traded over $1.1720 before or after the 2011 peak.

The semiannual NYMEX crude oil chart displays the downside spike to negative $40.32 per barrel as demand evaporated during the global pandemic and storage capacity disappeared on Apr. 20, 2020, as the nearby NYMEX contract was in the delivery period. NYMEX crude oil futures had not traded below $10.35 per barrel before or after the bearish spike.

The commodity price cycle created a top in cotton in 2011 and a bottom in crude oil in 2020. 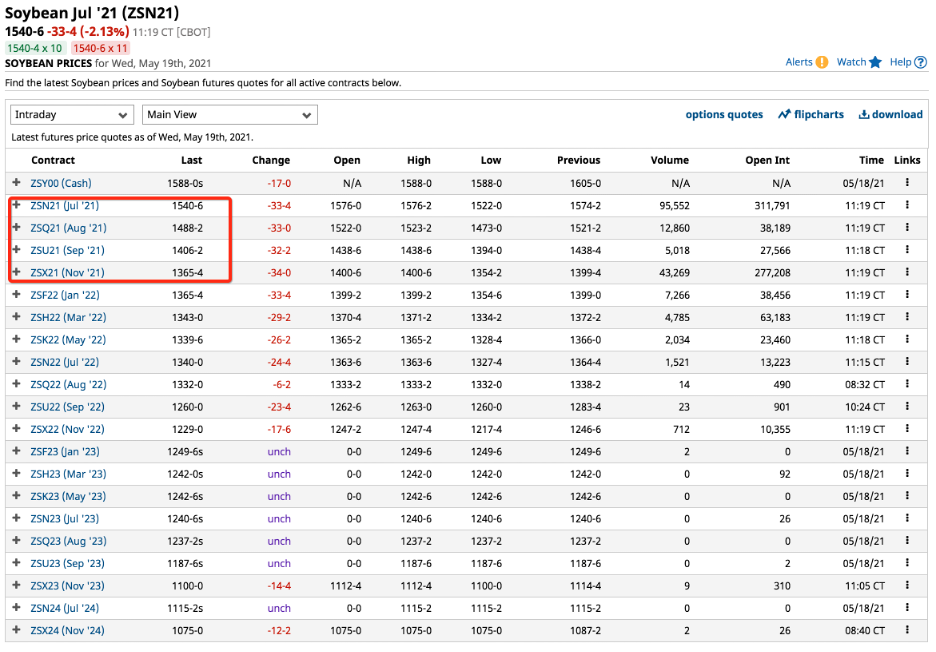 The chart shows that soybeans for July delivery were trading at the $15.4075 per bushel level with new crop November beans at $13.6550, a $1.7525 or 11.4% backwardation. The shortage of nearby soybeans is because of robust Chinese demand. The lower price for November delivery reflects optimism that the 2021 crop will satisfy demand.

Contango is a condition where deferred prices are higher than nearby prices. Contango reflects plenty of nearby supplies when a market is in a glut or when supply and demand reach equilibrium. 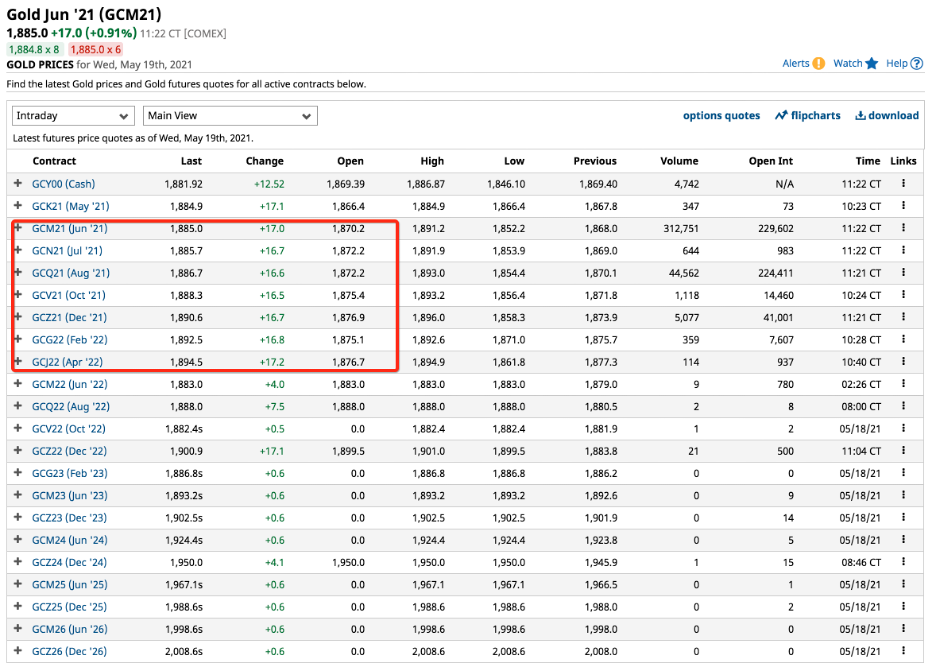 The chart highlights that gold for delivery in April 2022 is trading at $9.50 higher than for delivery in June 2021. Central banks hold around 30% of all of the gold ever mined in the world’s history. Without concerns about supplies, markets tend to trade in contango.

Contango and backwardation tell us if markets are tight, or if demand outstrips supplies, or if they are loose when supplies are equal to or greater than nearby demand.

A quality spread reflects the price differential between two grades of the same commodity. A location spread is the price difference for the same commodity in two different areas of the world. An example of a combination of a location and quality spread is the differential between Brent and West Texas Intermediate crude oil, the two pricing benchmarks for the energy commodity.

trades in the futures market on the Intercontinental Exchange. Brent crude oil is the pricing mechanism for crude oil produced in Europe, North Africa, and the Middle East. The Middle East is home to over half the world’s crude oil reserves. Brent has a higher sulfur content than WTI crude oil, making it preferable for refining into distillate products, including , jet, and diesel fuels.

West Texas Intermediate trades on the CME’s NYMEX division. WTI comes from North America and has a lower sulfur content, making it the crude oil of choice for gasoline refineries.

Approximately two-thirds of the world’s consumers and producers use the Brent benchmark for pricing, while one-third of pricing uses WTI. The difference in composition and production locales makes the differential between Brent and WTI a location and a quality spread. 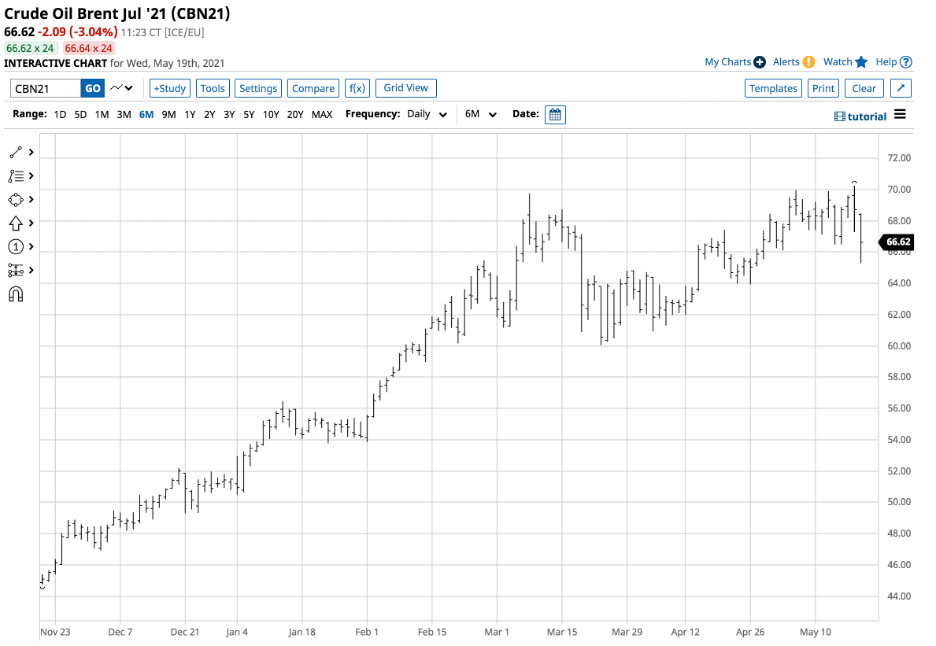 The chart shows the recent price of $66.62 for July Brent crude oil futures. 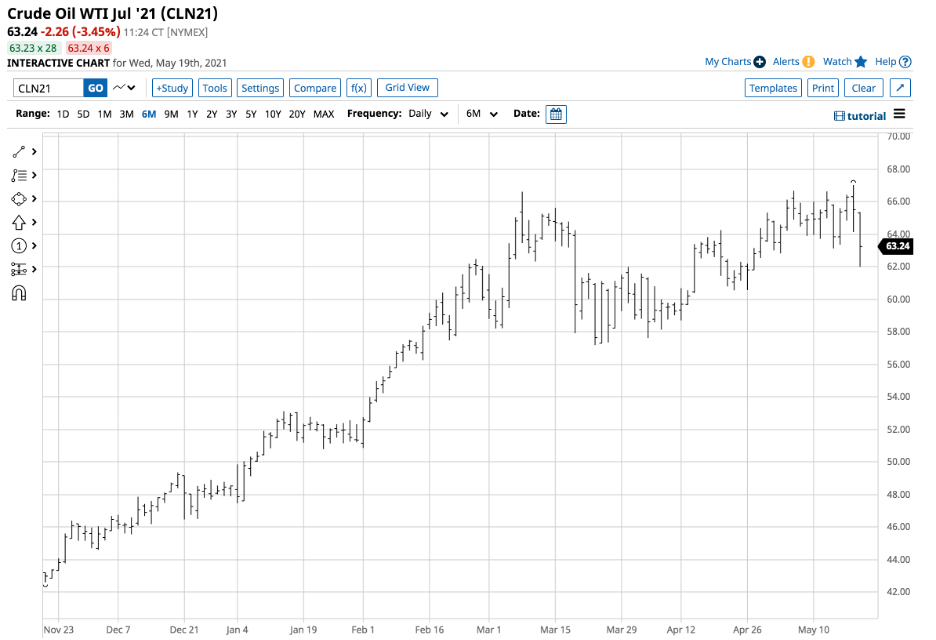 Meanwhile, NYMEX WTI futures for July delivery were trading at $63.24 per barrel at the same time. Brent commanded a $3.38 premium to WTI, reflecting the supply and demand for the different locations and qualities of the energy commodity. Moreover, Brent-WTI is also a political risk spread as the Middle East is the world’s most turbulent political region.

Quality and location spreads can tell us about market fundamentals worldwide. Over the past decade, Brent’s premium over WTI tends to rise when crude oil prices are moving higher. However, that could change over the coming years as increased regulations and lower fossil fuel output under the Biden administration to address climate change may change the dynamics and historical trading pattern of the Brent-WTI location and quality spread.

Processing spreads reflect the price margin for refining, crushing, or processing one traded commodity into another. The margin or processing of crude oil into gasoline and distillate products or “crack spreads” are an example of processing spreads. Crude oil is processed via a catalytic cracker in oil refineries. When the refining margin rises, it offers clues that demand for oil products is increasing, which often translates to higher prices for the input, crude oil. 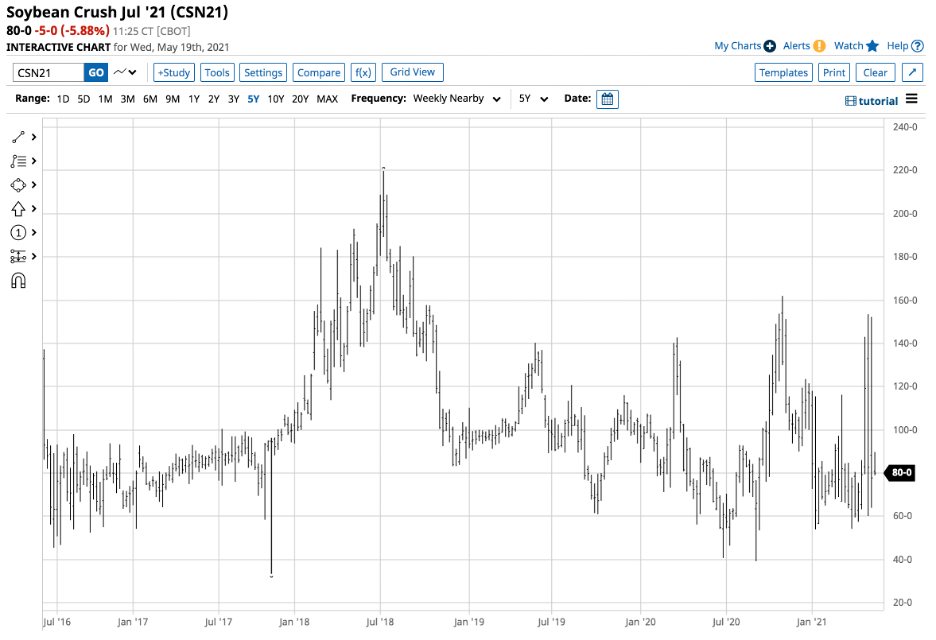 The chart of the July soybean crush spread can serve as a guide that provides price clues for soybean futures. A rising crush spread tells us that the demand for meal and oil is rising, while a falling crude signifies the opposite, which spotlights the level of demand for the underlying oilseeds and the potential for the path of least resistance of prices.

Processing spreads are a part of a commodity market’s structure that can be valuable for fundamental analysts making price forecasts.

A substitution spread tells us the historical price differential between two commodities that can be production or consumption substitutes. Each year, during the planting season, many US farmers have a choice of planting corn or soybeans on their acreage. The price differential between new crop prices can dictate if they plant beans or corn. The long-term average of the spread is at around 2.4 bushels of corn value in each bushel of soybean value. Farmers use the new crop-post harvest futures prices to determine the ratio. 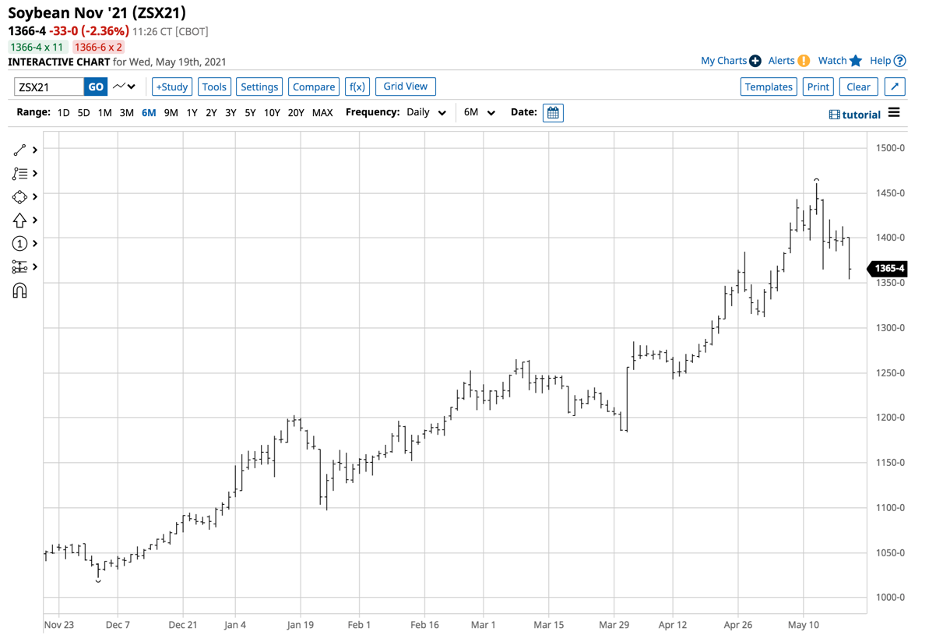 Most recently, new crop November 2021 soybean futures were trading at the $13.6650 per bushel. 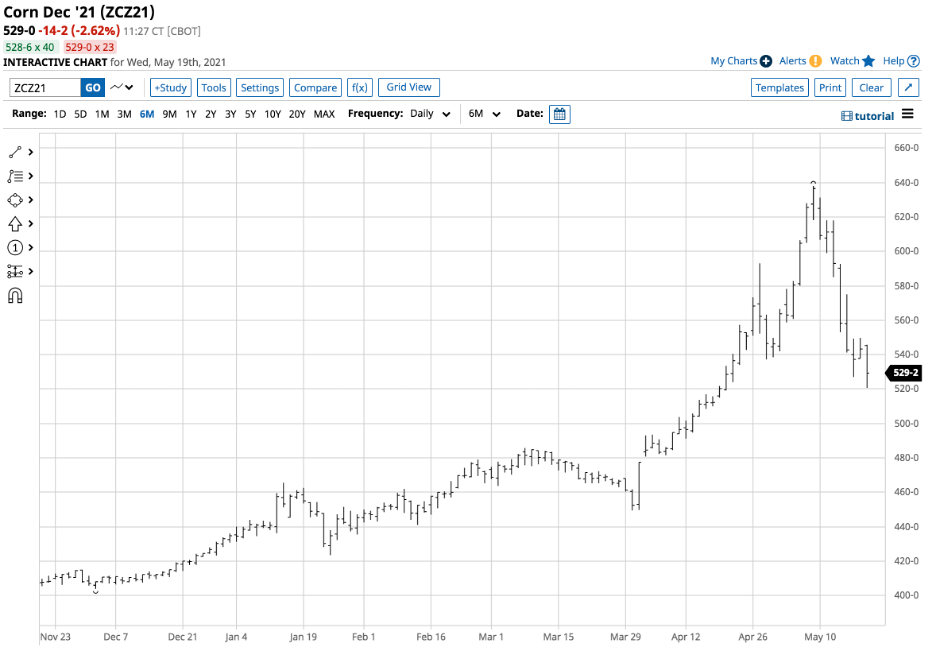 At the same time, new crop December 2021 corn futures were at the $5.2900 per bushel level. The ratio is calculated by dividing soybean by corn prices, yielding a 2.58:1 ratio. At above the long-term 2.4:1 average, farmers are likely to plant more corn than beans at the level of the spread as the beans offer a more attractive financial result.

The corn-bean ratio is an example of a substitution spread from the producer’s point of view. An example for the consumer is the spread between and gold. For many years, platinum traded at a premium to gold, earning it the nickname “rich person’s gold.” Since 2014, platinum’s price slipped below gold and continued to fall. As of May 19, nearby NYMEX platinum futures were at the $1202 level, with gold at $1885. At a $683 discount, platinum is historically inexpensive compared to the gold price. Investors who purchase precious metals as a store of value may opt for platinum given its historically low price compared to gold.

Corn versus soybeans or platinum versus gold is just two examples of many for substitution spreads in the commodities asset class. Historical price deviations can create excess supply or demand in two commodities that result in mean reversion towards historical averages.

Market structure is like a jigsaw puzzle in the world of commodities. Putting the various pieces together can give investors and traders an edge in projecting the path of least resistance.

11 senators were totally absent from Jan. ...