Commodities: Gold Corrects Again As The Fed Makes A Not So Subtle Shift

Gold moved steadily higher from the end of March until the yellow metal probed above the $1900 level in late May and early June. Bullish sentiment was growing until the price fell below $1900 a few days before the June FOMC . It evaporated in the aftermath of the central bank’s latest report on the economy and a subtle shift in its tone regarding the futures of US monetary policy.

Gold is a currency and a commodity. The yellow metal has a unique role in the global financial system that appeals to at least three segments. Gold’s properties make it an industrial metal with a variety of applications. Individuals covet gold and embrace the metal as jewelry, ornaments, and a store of value. Central banks validate gold’s role as a currency as they hold the metal as an integral part of their foreign exchange reserves. Gold has a long history, dating back to ancient times.

Meanwhile, gold’s price fell in the wake of the June Fed meeting. The price action directly resulted from the market’s interpretation of the central bank’s change in attitude.

Nearby August COMEX gold futures rose above the $1900 level on May 25 after reaching a low under the $1680 level in March. Gold took a staircase higher throughout April and May. The $1900 level became a pivot point for the precious metal, reaching a high of $1191.20 on June 1. On June 11, less than one week before the June FOMC meeting, gold dipped below the $1900 level. It has not returned. 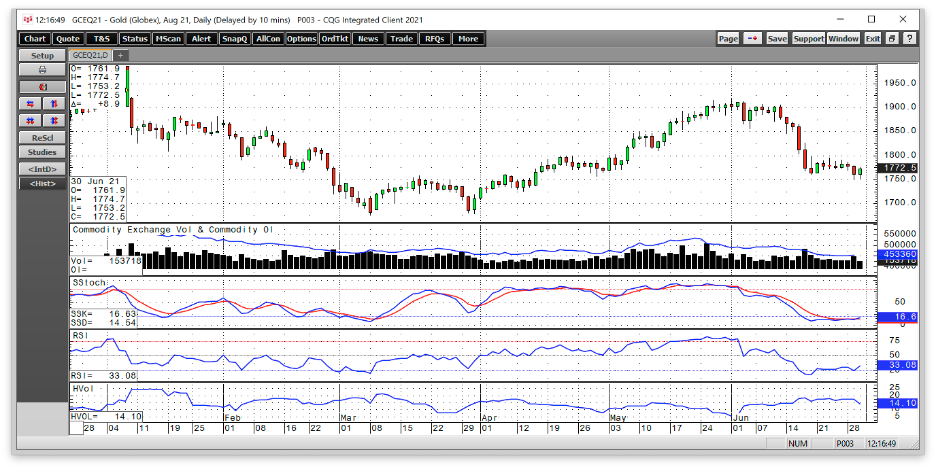 The daily chart shows the decline in gold’s price that picked up downside steam on June 16 after the FOMC meeting. So far, gold dropped to a low of $1750.10 on June 29, and was at just over the $1770 level on June 30, not far from the most recent low. Gold has not challenged the March bottom, but the short-term trend remained bearish at the end of June.

Open interest, the total number of open long and short positions in the gold futures market at the 453,360 level on June 29 fell from 533,343 on May 21 when gold was on its way to the $1900 level. The 15% decline in the metric may not be a technical validation of an emerging bearish trend in the futures market, but it signifies long liquidation by frustrated gold bulls over the past weeks.

Daily price momentum and relative strength indicators were sitting near oversold conditions at the end of June. Daily historical volatility at over the 14% level was higher than when gold was at its recent high. Gold’s price variance tends to elevate when the price is in a bearish trend.

On June 16, the Fed’s was benign. The central bank left the short-term Fed Funds rate unchanged at zero to twenty-five basis points. It did not alter its quantitative easing program, saying it will continue to purchase $120 billion in debt securities each month. The central bank increased its forecast from 6.5% to 7% for 2021. It also raised its inflation expectations from 2.5% to 3.4% for this year. The Fed increased the reverse repo rate by five basis points, a marginal rise.

Meanwhile, seven FOMC members said they forecast rate hikes on the horizon in 2020, with two voting members expecting two increases in the Fed Funds rate. The Fed tightened monetary policy with its statement and rhetoric without any substantial change in monetary policy at the June 16 meeting.

The prospects for higher rates weigh on gold

The prospects for higher interest rates weighed on gold’s price. After opening at just over the $1860 per ounce level on the August futures contract on June 16, the price fell by around $100 per ounce by June 18.

Higher US interest rates pushed gold lower because they increase the cost of carrying a long gold position. Gold competes with other asset classes for investment flows. Rising interest rates make debt securities more attractive than the precious metal. Higher US rates also increase the dollar’s role as a reserve currency. As the dollar’s yield rises, it tends to weigh on gold’s price. A stronger dollar has been historically bearish for the yellow metal.

A shift from ‘transitory’ to ‘temporary’ does not change the trend

The Fed called rising inflationary pressures “transitory” as , , and prices rose to record highs in May. Grains and many other commodities reached multi-year highs. Energy prices continued to rally, and gold moved to over $1900 before the recent selloff. Asset inflation is not limited to raw material prices. Real estate is soaring. The Case Shiller Index of housing prices rose by an all-time high in May. The stock market is at record highs.

In another subtle shift, the central bank has shifted from “transitory” to “temporary” in characterizing inflationary pressures.

The shift in rhetoric may be subtle, but if the Fed has altered its view, it can do it again, and “moderate” inflationary pressures could be on the horizon in the coming months. The rhetoric does not change the trend. Prices are rising, which should come as no surprise given the tidal wave of central bank liquidity and tsunami of stimulus since the pandemic began in early 2020.

Basel III, which took effect on June 28, 2021, classifies allocated physical gold as a tier-one asset class in the same category as cash. Unallocated gold balances will receive a haircut valued at 85% of the allocated metal. Holding paper gold, in the form of unallocated balances at bullion dealers or ETFs such as , will have a lower classification. Basel III could increase the demand for gold bars and coins. Yogi Berra once said that “and they give you cash, which is just as good as money.” Gold at the highest tier in Basel III could increase the precious metal’s value as central banks, and financial institutions have further reason to buy and hold the metal as an integral part of their reserves.

For more than two decades, buying gold on price weakness has been the optimal approach to investing and trading the metal. 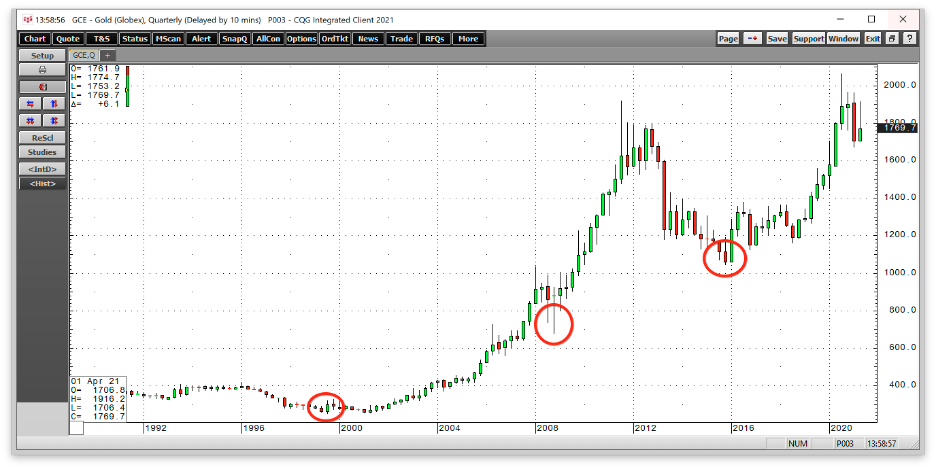 The long-term quarterly chart illustrates since gold found a bottom at $252.50 per ounce in 1999, it has made higher lows and higher highs. The trend is always your best friend in markets, and in gold, it remains higher.

The Fed may have tarnished gold for the short-term with its rhetoric, but the central bank is behind the eight ball when it comes to rising inflationary pressures. Gold is an inflation barometer, with many markets screaming that inflation is rising. Expect gold to find another higher low and eventually reach higher highs in a continuation of the trend that began at the end of the last century.