Coffee: Wake Up And Smell The Money

Away from the figurative trading pits for oil and gold in New York, something aromatically strong is drawing commodity bulls in: . From six-week lows just two weeks ago, arabica coffee on ICE Futures U.S. has gained over 6% in three straight sessions, catapulting the commodity to near three-week highs. 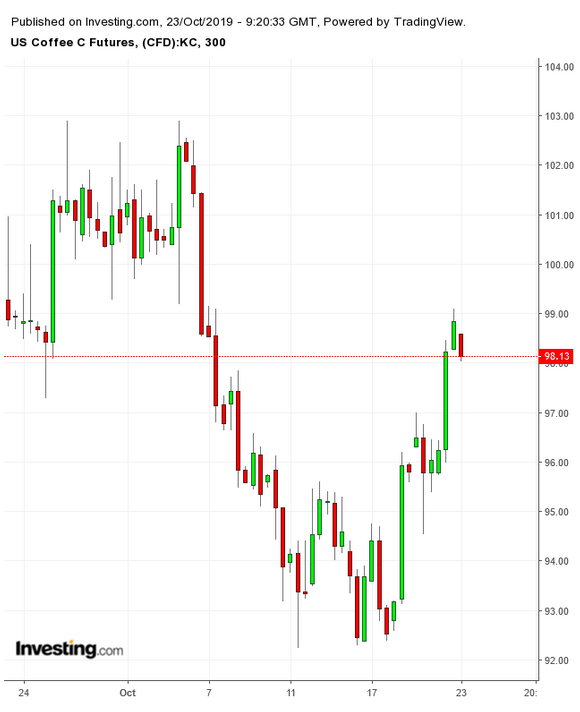 Favorable technical action, along with early inclement weather and tree stress — the two things that could restrain top arabica grower Brazil from a bumper crop this year — are driving the rally.

A Tale Of Two Coffees

Proving not all coffee beans were the same, however, is struggling to get into an even rally. Grown largely in Vietnam and traded on the London International Financial Futures and Options Exchange, or LIFFE, futures of robusta have settled up only twice in the last six sessions, with no milestones to show. 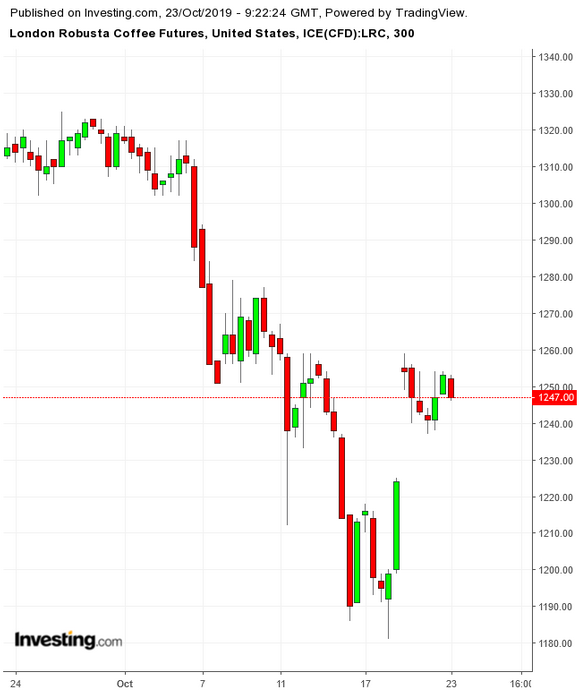 Jack Scoville, author of Chicago brokerage Price Futures Group’s daily coffee and other soft commodity reports, notes how the diverging trends in arabica and robusta could play to the fortunes of coffee bulls and bears:

“Trends in New York are turning up while trends in London are still mostly down.”

Scoville says the recent run-up in Brazil’s was another factor in arabica’s favor, given the considerable influence the currency had on ex-farm prices of Brazilian commodities. The real started to appreciate against the U.S. dollar as Brazil’s coffee cooperative Cooxupe said it had sold most if not all of its previous crop supplies.

Weather played a role too. Reports of good flowering and strong crop expectations in Brazil were offset by some extreme cold and drought conditions earlier in the year that Scoville said might have stressed trees and could hurt production potential for the full year.

In Tuesday’s session on New York’s ICE, arabica’s front-month December contract settled at 98.90 cents a lb, up 3.3% week-to-date after a 2.1% gain the prior week. Year-to-date though, it was down almost 3%, accounting for losses from earlier in the year.

The upside trend set now by arabica seemed in line with the predictions laid out by J.P.Morgan:

“Arabica coffee markets may be prone to an imminent switch in signal, from negative to positive. The impact of trend following models should not be underestimated in agricultural markets.”

“Calendar spreads have also been rapidly becoming less negative which is a good sign that the supply/demand dynamic is shifting to bullish.”

“While positive weather factors for next years crop had presented managed money funds an opportunity to sell short and try to press prices down further, the conversation should start changing to near term fundamentals.”

Investing.com’s Daily Technical Outlook rates arabica as a “Strong Buy,” predicting a top-end resistance of 99.90 cents per lb. It also notes that arabica had smashed past most price barriers set in recent days, and was now trading above its 200-Day Moving Average. According to Scoles:

“If news continues coming out bullish and we see a tighter supply situation, arabica could be high performer for bulls.”

In robusta’s case, the front-month January contract on LIFFE settled Tuesday’s London trade at $1,216 a tonne, eking a 3% gain week-to-date after a near 9% drop accumulated over three weeks prior.

Investing.com’s Daily Technical Outlook rates robusta as a “Sell,” predicting a bottom-end support of $1,179 for the January contract. Said Scoville:

He said Vietnamese robusta exports also remain a year behind. “The market anticipates bigger offers as producers and traders will need to create new storage space. They are expected to do this by selling old crop coffee at lower prices.”

What will we make of our moment?