‘Tis the season to be chocolatey.

As the top time of the year for bakes and other treats approach, demand and prices for cocoa, the world’s No. 1 confection and beverage commodity is also tightening. 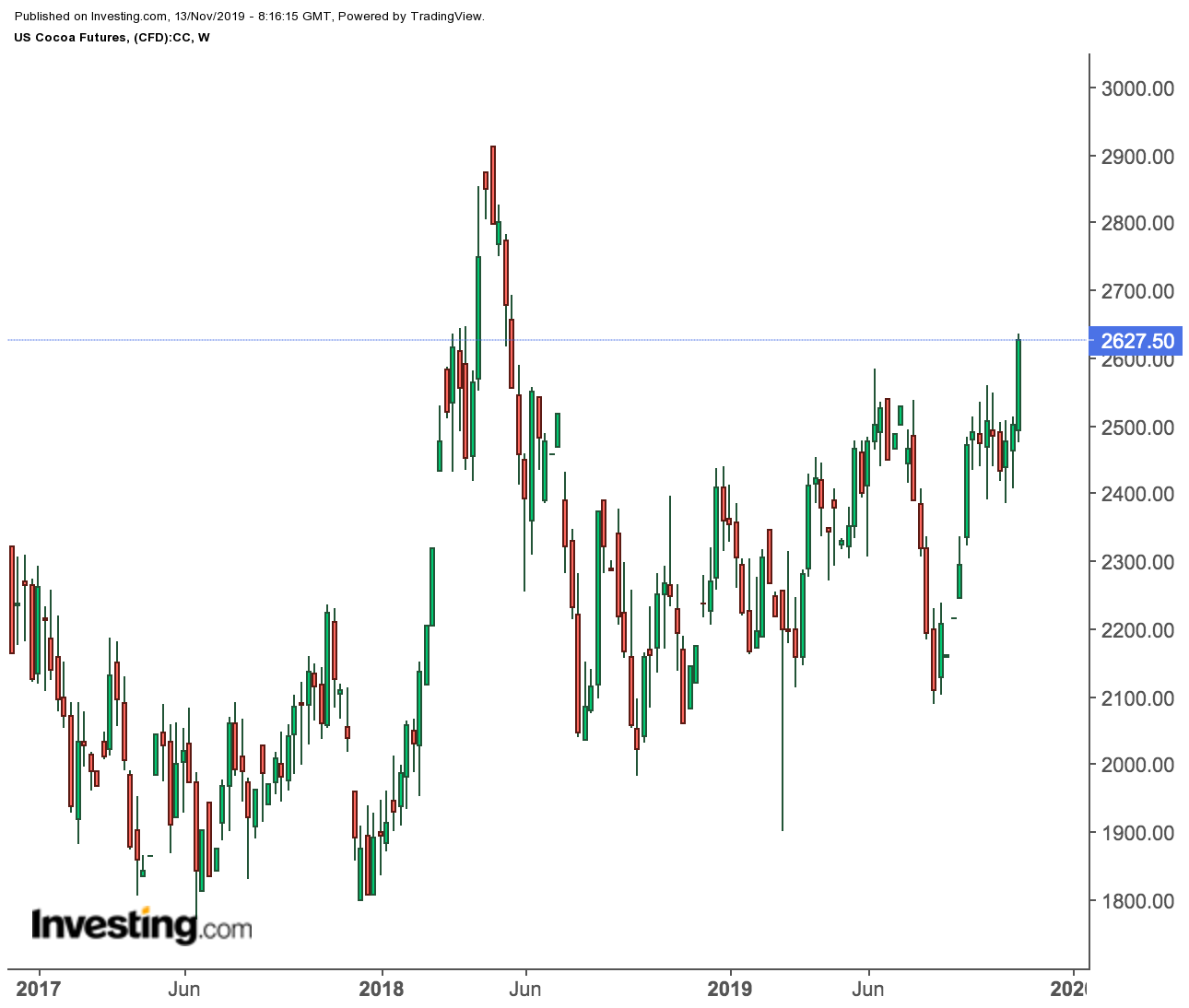 In Tuesday’s session, on New York’s ICE hit their highest in a year and a half at $2,648 a tonne, rallying with the approach of festivities such as Thanksgiving in the last week of November, and December’s Hanukkah, Christmas and New Year’s Eve.

“The weekly charts for cocoa imply that a significant rally is possible over the next few weeks,” said Jack Scoville, analyst at Chicago’s Price Futures Group for “soft” commodities that include cocoa, coffee, sugar and orange juice.

Scoville said the harvest was active this week in the world’s largest cocoa growing region of West Africa, with “good volumes and quality” indicated for the incoming produce. Unlike other commodities, cocoa’s pricing is a little peculiar, in the sense that it’s based on the yields of “cocoa butter” that’s ground from harvested beans.

It’s the butter in cocoa that gives chocolates and ice cream their smooth, creamy taste. Grinding also produces the cocoa powder used for baking goods such as cakes and biscuits and for making beverages like hot chocolate.

It’s The Butter, Got It?

A glut of beans in the market will not automatically depress the cocoa market as prices are quality-dependent. The higher the bean quality, the more voluminous and superior its butter will be. Confectioners usually pay a premium for such beans.

Yet, an acute shortage of beans will also result in scant production of cocoa butter as a whole. This will squeeze confectioners’ butter inventories, triggering a race for whatever supply is left in the market and inevitable price spikes.

Scoville said the latest quarterly grind data he had observed for cocoa was “mixed, and left people wondering how good the demand will be.”

Demand Could Be “Very Good,” Production Too

But the current price action also indicated that demand could turn out to be “very good,” he said.

“The reports from West Africa imply that a big harvest is possible in the region. Ivory Coast arrivals are strong and are above year ago levels. The weather in Ivory Coast has improved due to reports of frequent showers.”

“The precipitation is a little less now so there are no real concerns about disease. Ideas are that the next crop will be very good. Both Ivory Coast and Ghana are doing what they can do boost cocoa prices.”

Reuters, meanwhile, reported on Tuesday that cocoa arrivals at ports in Ivory Coast were estimated at 446,000 tonnes between Oct. 1 and Nov. 10, up 5.7% from last season.

Ghana, the world’s No. 2 cocoa producer, has sold nearly 200,000 tonnes of cocoa for the 2020/21 season, with prices including the new $400 per tonne living income differential, the report added.

A boom in demand from candy makers to hedge funds catapulted cocoa to the top of the commodity heap in 2018, with returns of 26%.

Another Good Year Shaping For Cocoa?

This year, after modest but steady gains between February and June, cocoa prices saw a slide until September’s huge 13% price spike.

After another modest downdraft last month, the market began rallying again, picking up nearly 10% in November. Year-to-date, it is up almost 22%.

“Momentum studies are rising from mid-range, which could accelerate a move higher if resistance levels are penetrated. The market’s short-term trend is positive,” the ADM analysts said in a note.