China’s imports and exports fell more than expected in September

A Chinese flag is seen in front of containers at the Yangshan Deep-Water Port, an automated cargo wharf, in Shanghai on April 9, 2018.

China‘s import and export data for September came in worse than expected amid the country’s ongoing trade friction with the U.S., Reuters reported on Monday, citing the Chinese customs.

In U.S. dollar terms, China’s exports fell 3.2% in September from a year ago, while imports dropped 8.5% during the same period, according to Reuters. The country’s total trade balance in September was $39.65 billion, Reuters said.

Economists polled by Reuters had expected Chinese exports denominated in the U.S. dollar to fall by 3% and imports to decline by 5.2% in September, compared to a year ago. The country’s overall trade surplus for last month was forecast to be $33.3 billion, according to the Reuters poll.

In August, China’s exports in U.S. dollars unexpectedly fell by 1% year-over-year — the biggest fall since June — as shipments to the U.S. slowed down sharply. Chinese imports, meanwhile, dropped 5.6% in the same period. That brought its trade surplus to $34.83 billion, according to Chinese customs data.

In yuan terms, China’s exports in September was 0.7% lower from a year ago, while imports dropped 6.2% during the same period, according to Reuters. 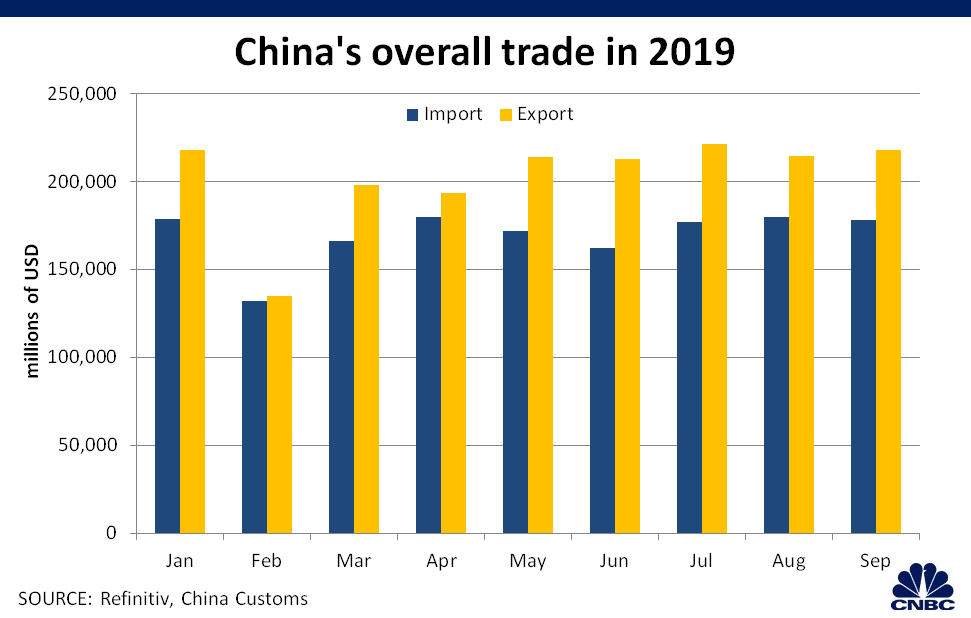 “The mini US-China trade deal reached on Friday doesn’t alter the outlook significantly,” he wrote in a note.

“Looking ahead, exports look set to remain subdued in the coming quarters,” he added. “Meanwhile, import growth has slowed sharply in recent quarters and now looks unusually weak relative to economic growth. A partial rebound in headline import growth is therefore likely in the near term.”

The Chinese economy — the second largest in the world — is growing at a slower pace amid the protracted trade battle between Beijing and Washington. Officials from both countries met in Washington last week to discuss trade, and President Donald Trump said the U.S. has come to a “very substantial phase one deal” with China.

Trump said that deal will involve China purchasing $40 billion to $50 billion worth of American farm products, and address concerns such as intellectual property theft and currency manipulation. Washington also suspended an increase in tariffs on Chinese goods planned for this week.

A spokesman from the Chinese customs said the country’s trade frictions with the U.S. has affected its export and import activity, Reuters reported on Monday.