The midweek announcement by Chevron Corp (NYSE:) sliced like a scythe across the heart of the natural gas industry, underscoring the idiom: “It is what it is.”

With shale fields turning out more gas than ever each day and burn rates for heating proving dismal from December weather that still felt at times like September, Chevron ripped into the soul of those still betting on a turnaround in gas prices.

Announcing one of the largest energy industry write-downs in years, Chevron said it will reduce funding to various gas-related opportunities, including Appalachian shale, Kitimat LNG, to save some $10 billion to $11 billion. It will also lower the value of a planned facility to export liquefied natural gas from Canada.

Chevron Chairman and CEO Mike Wirth said the decision will make “the best use of our capital … investing in our most advantaged assets”. Natural gas won’t be one of those assets for sure.

Despite Wirth’s remarks prophesying deeper gloom for the gas business, the on the New York Mercantile Exchange’s Henry Hub didn’t really have a meltdown Wednesday.

The January gas delivery contract on Henry Hub settled nearly flat, at $2.26 per million metric British thermal units after a 3-cent, or 1.4%, rally the previous session. Just on Friday, January gas fell to a near four-month low of $2.15 per mmBtu. 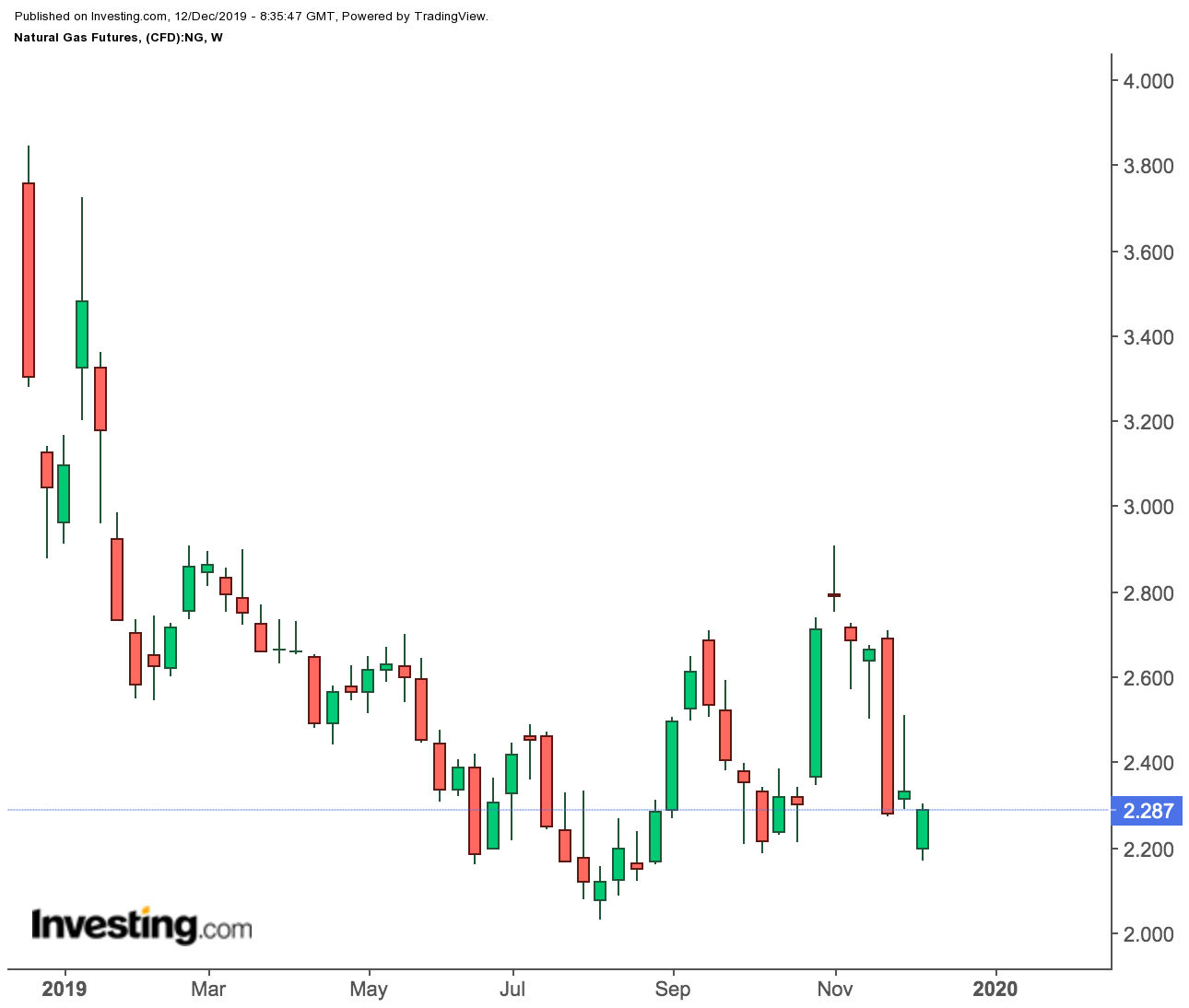 Wednesday’s market was supported on the lower end by expectations that last week’s relatively colder weather and higher burn rates of gas for heating could have resulted in a drawdown of 76 billion cubic feet from gas storage.

That’s the bet on the due from the Energy Information Administration at 10:30 AM ET today and if correct, it would be four times more than 19 billion cubic feet draw from the previous week.

The heavier drawdown likely came as last week’s temperatures were closer to normal for this time of year.

According to weather models, there where 155 heating degree days (HDDs) versus a 30-year average of 162 HDDs for the period. HDDs measure the number of degrees a day’s average temperature is below 65 Fahrenheit (18 Celsius) and are used to estimate demand to heat homes and businesses.

Drawdown expectations aside, the lack of a market selloff on the Chevron story on Wednesday might be due to some gas longs thinking the company’s cutbacks might be good after all in bringing gas production down in the longer run. Good riddance, as some would say.

Yet, as Phil Flynn, analyst at Chicago’s Price Futures Group brokerage noted, Chevron’s decision was “a sobering reappraisal by one of the world’s largest and best-performing oil companies” of the state of the natural gas business. The decision could be “forcing others to publicly reassess the value of their holdings in the face of a global supply glut” in gas, Flynn noted.

And while Wirth made it clear that the company was doubling down on its shale oil investments — that’s where the savings from gas will go — Chevron’s decision will send larger ripples across the energy industry, “growing investor concerns about the long-term future of fossil fuels,” Flynn cautioned.

NatGas Is The Weakest Link Now In Energy Space

For now though, natural gas is the weakest link across the energy investing space with weeks of unseasonably mild weather leaving gas in storage at an estimated 3.515 trillion cubic feet — some 20% higher than year-ago levels.

U.S. gas production has been at a roaring record this year, averaging over 92 billion cubic feet per day, up 10% growth from 2018.

Dan Myers, analyst at Houston-based gas risk consultancy Gelber & Associates, stresses that this week’s modest dips in gas prices after Friday’s selloff “is still not exactly a vote of bullishness for the heart of winter.”

Compounding the weakness in gas now were contrasting reads on the weather: rarely have analysts been at so much of disagreement over when it will blow hot or cold, resulting in confusion for investors, traders and their headline-reading algorithms.

Myers says he expects December’s variable weather patterns to roll on with warmer temperatures this weekend, before the onset of cooler weather models in a 11-15 day period.

“A blast of cold, stormy weather into the East has boosted heating demand and sent spot prices at Transco Zone 6 NY and other Northeastern hubs spiking down 50% for daily gas flows.”

“However, this short-term increase and whatever support it brought to futures will be short-lived as demand eases after tomorrow before another cold shot early next week.”

But Dominick Chirichella of the Energy Management Institute in New York instead expects most of the United States to be unseasonably warm for the second half of December — a factor that he says which will have a negative impact on gas-driven heating demand.

“If the actual temperatures are in sync with the latest forecasts, supply will remain ample as inventory withdrawals will be below normal for this time of the year.”

After Saudi ‘Surprise’ Can OPEC Actually ...