Chart Of The Day: Why Silver Will Fall Despite Rising Risk-Off Sentiment

Last week, we provided a bearish call on , saying that if spiking wasn’t a strong enough catalyst to push the precious metal higher, that’s a bearish sign. Indeed, after that point, the yellow metal slumped, completing a bearish wedge, which has provided resistance to today’s gold price.

Now we’re focusing on , which, even as risk-off sentiment seems to be escalating, we expect will head lower. Blame it on the current increase in Treasury buying, which strengthens the , the base currency in which the precious metal is denominated, making it more expensive.

We’ve noted in previous articles that the fact that gold alone was rising, within the wedge, while silver and were not, suggested that investors were not perhaps being driven by concerns of higher inflation, but rather more likely by the Delta variant as a risk factor to stocks.

Whatever the case, now, investors appear to have put all their safe haven investing behind just one asset—Treasuries. Yields have lost as much as 60 basis points since the Mar. 30 peak, as investors have been snapping up US government bonds for their portfolios, even amid continued record highs for stocks. This could also indicate either a market debate concerning the outlook for economic recovery, or a hedge against over-stretched valuations.

Gold is traditionally the more common haven asset than silver, which may provide a reason why silver is down 2.5% today, losing 4.75% over the last two days. Could just be the white metal is perhaps acting as a leading indicator for gold. Here’s what the supply-demand dynamic looks like on the daily chart: 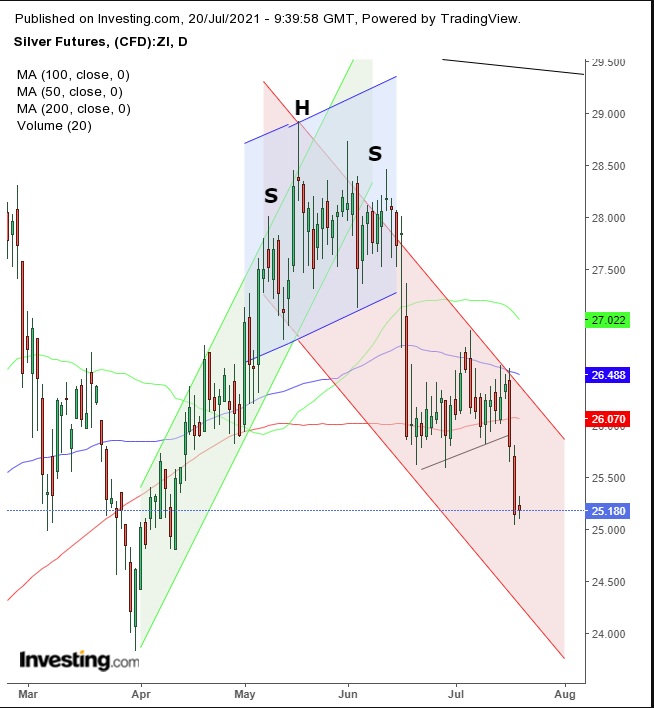 On Monday, silver provided a downside breakout for a small, month-long, H&S continuation pattern, which included crossing below the 200 DMA, and which fit well within its falling channel. This is the second consecutive bearish pattern, after the H&S top that reversed the previous uptrend.

Here’s what the wider perspective is indicating: 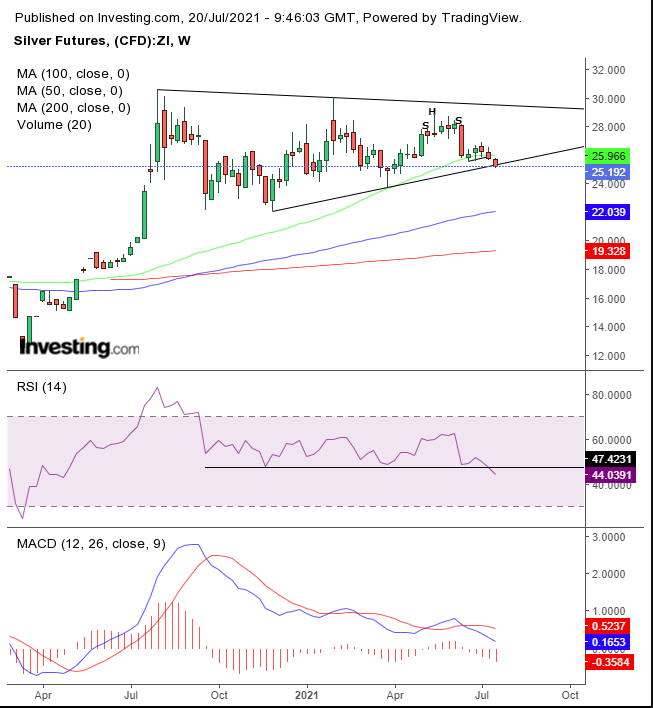 Silver’s two previous bearish patterns were the market devices to help bears push the price from the top to the bottom of a symmetrical triangle. Today, the price found support at the bottom of the triangle, for a second day.

Beware, however, demand may overcome supply. That would push the white metal back toward the top of the pattern—which happens to coincide with the psychological round 25.00 number. Nevertheless, the weekly RSI indicates momentum is to the downside. The MACD triggered another minor bearish cross since it topped out soon after the triangle began to emerge.

Conservative traders should wait on a short position for the price to fall below the Mar. 31 low (corresponding to the Mar. 30 peak for yields, mentioned above), then attempt a rebound that would peak below July 6 high (the head of the H&S continuation pattern), to establish a peak-and-trough downtrend.

Moderate traders, hoping for a return-move, could short near the neckline of the recent H&S.

Aggressive traders would enter a contrarian long position, counting on the support of the bottom of the triangle, which could be the catalyst for a corrective rally to retest the H&S continuation pattern, before joining moderate traders with a short. Money management is crucial, even more so, with riskier trades. Here’s an example:

Author’s Note: These are just samples and not necessarily the only ways to approach these trades. Also, they’re not the full analysis. If you didn’t read, understand and accept the risks described in the post, do NOT trade. The analysis is merely our interpretation of the market dynamics and of the principles of technical analysis. We could be wrong. Even if our interpretations are sound, they only establish a statistical forecast. They are not a crystal ball. The objective of trading is to achieve success on a statistical basis, not an individual one. Trading is nothing more than luck management, as the trader attempts to get on the side of statistics. Before you enter a trade, realize you could lose the capital you committed. If you can’t handle that loss, do NOT enter a trade. You need to develop your own trading style, which suits your budget, temperament and timing. Your trading plans must reflect that. Until you learn how to do that, you may follow our samples, for education, though not profit…or you will end up with neither. Guaranteed. And no money back.