Chart Of The Day: Trading Oil Amid Prospects Of Saudi-Kuwait Deal

is falling for the second day following reports that Kuwait and Saudi Arabia are nearing a deal to restart production in the shared neutral zone along their border which has been untouched for four years.

For traders that means up to an additional 500,000 barrels a day on the market — plus weighing up this new reality. Are they done, or will prices keep falling?

Technical analysis of the charts can help determine what to look for next. 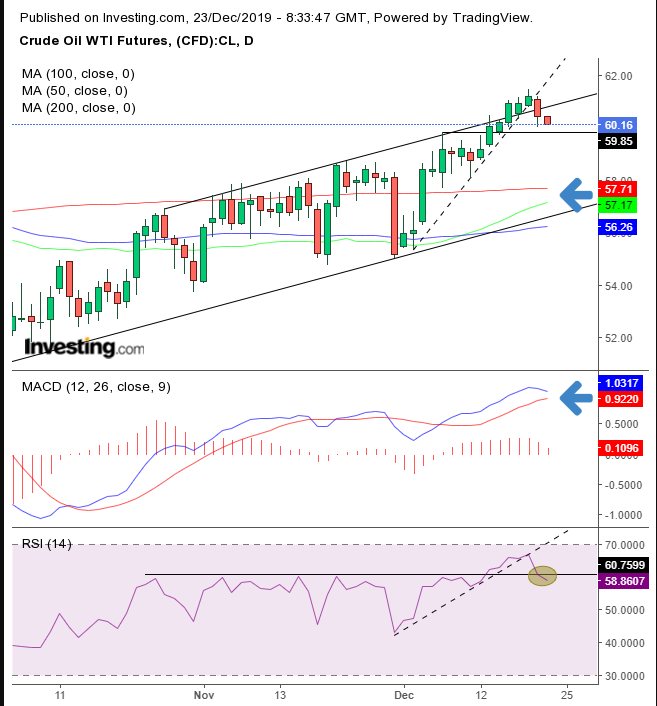 These forces — supply and demand — are not necessarily driven by different investors. The same trader could contribute demand for the contract at the bottom of the channel, then take profit when it reaches the top of the pattern, joining with the supply side of the market.

For this reason, more conservative traders would wait for a full return move toward the channel bottom or for evidence of a channel blowout, using that top as a likely support. More aggressive traders may short, providing they understand the risks and have written their trade plan accordingly.

But there’s more evidence on the chart. While the 50 DMA is climbing toward the 200 DMA for a potential “golden cross,” its bullishly predictive qualities have been diminished by the fact that prices have been moving sideways since the “death cross” in July. The MACD is the most overbought since May and is curving down for a likely sell signal. The RSI provided a negative divergence, when it dipped below its series of peaks since October, while the price is still above the Dec. 6 peak.

Conservative traders should wait for evidence of support at the bottom of the channel or, upon a blowout, above the channel, for a long position, along with the medium-term rising trend.

Moderate traders may short upon a close below $59.85.

Aggressive traders may short now, providing they understand the risks and have their preset entries and exits in place that allow a worthwhile risk-reward ratio.

A Decade In Commodities: No Word Yet ...