Chart Of The Day: Trading Gold Amid Conflicting Intermarket Dynamics

Despite rallying for a fourth day, it’s being squeezed between conflicting market fundamental themes, including a global economic slowdown, strength and the Fed’s current interest rate policy. Understanding the various drivers and parameters can help gauge the next big move.

From its August 2018 bottom at the $1,160 level, gold has been driven higher because of its safe haven status. Since May it’s received an additional bounce on the outlook for lower U.S. interest rates, whose outlook for a lower dollar-yield boosted the relative value of the non-yielding commodity.

Yesterday’s advance followed the Fed’s saying the central bank may need to , to offset downside risks from trade conflicts and too-low inflation.

But gold has been climbing since Thursday, ahead of Bullard’s dovish rhetoric. Beforehand, the yellow metal was trading within a holding pattern, in effect since mid-August, as investors awaited clarity regarding the Fed’s path to interest rates since the recent division of opinion among policy makers reduced the chances of additional cuts, even while Fed Chair Jerome Powell continues to reiterate that the Fed is monitoring the situation while remaining ready to continue easing as needed.

The commodity’s advance is particularly impressive considering it’s pushing ahead despite the weight of a third straight day of U.S. dollar strengthening.

But, why would the greenback move higher, if the yellow metal’s rally is a result of expectations for lower rates? That should hurt the dollar.

Perhaps the USD demand is coming from overseas, where a recession is all but a forgone conclusion and near-zero or even negative rates make Treasury yields look like a bonanza.

Given the conflicting intermarket dynamic, where is gold likely to go from here? 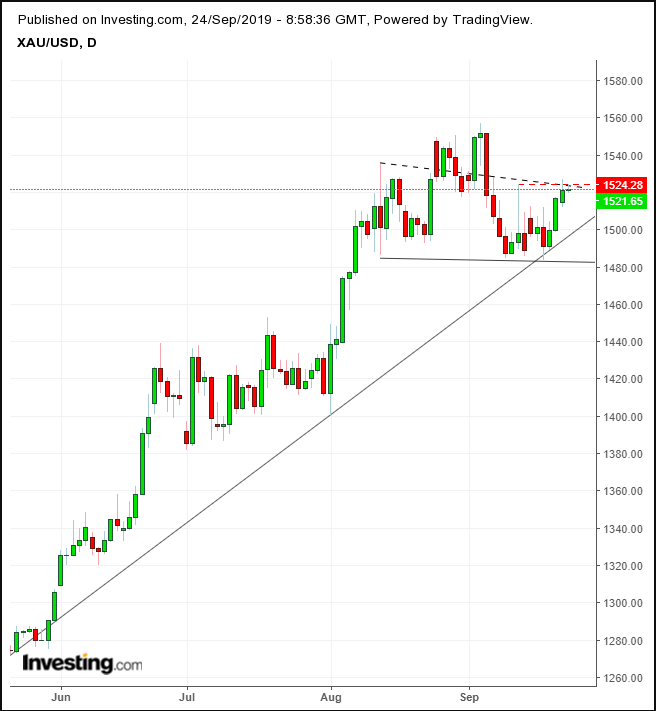 Gold’s current rally has brought the commodity to its highest in nearly three weeks, while slowing it at the same time. The balance of supply and demand reveal an unresolved collective investor mindset. The commodity is still within an uptrend since the May bottom, but the aforementioned holding pattern formed a H&S reversal, whose downside breakout would signal a downtrend.

However, the rally is shifting the price from the $1,480 neckline, the “line in the sand” for the trend. Still, the price slowed down by the Sept. 12 highs, as well as by the (dotted) trend line since the Aug. 13 high of the left shoulder.

In other words, this rally may simply play along the pattern’s dynamics, as it creates the right shoulder for a pattern that will end the uptrend.

So how to proceed?

Conservative traders would wait for either a downside breakout of the neckline or for a new high for a continued uptrend, using a three-percent filter to avoid whipsaws and see proof of trend with respective consolidations past the breaking points mentioned.

Moderate traders may wait for the same breaking points as conservative traders, though while they may wait for the return move for better entries, they won’t necessarily wait for support or resistance to strengthen the outlook.

Aggressive traders may enter a contrarian short position, taking advantage of the proximity to the resistance provided by the Sept. 12 high and that of the right shoulder.