Chart Of The Day: Silver Recovery Should Be Treated With Caution

and have endured a volatile week, recovering from a weak start to turn positive. Unless something changes later today, the precious metals are on course to end higher for the second consecutive week.

The major global indices, including the , Europe , have also recovered from a sizeable fall and are higher for the second week, while the is down for… yes, the second straight week, at the time of writing.

Noticed a trend? Well, financial markets have become very , and precious metals have been unable to decouple themselves from other assets. In fact, gold and silver have been trending positively with equities for a while now and that relationship seems to have become stronger since markets bottomed out in March.

So, whatever your short-term view on gold and silver is, make sure that view is aligned with correlating markets, like equities.

Sentiment has been dominated in recent days by events on Capitol Hill. Everything has become about the economic relief package, and trading has been all about risk-on or risk-off economic data, rising virus cases and everything else is being ignored.

It looks like the Trump administration has shifted tack and is now again leaning toward a large-scale fiscal aid bill. On Tuesday, Trump sent the markets sharply lower after announcing, via a tweet, that negotiations with the Democrats were to be put on hold until after the elections, only to then float the idea of individual aid measures for certain parts of the economy hit by the pandemic. However, Nancy Pelosi wasn’t up for that, and with Trump desperate to win voter support, he seems to have agreed that a more comprehensive stimulus package might be needed after all.

However, large differences remain between the two parties and everything could still fall apart. This is why it is imperative that traders remain very nimble and take things from one level to the next and move on to the next best opportunity.

With that in mind, silver has now approached a key level around $24.50 and traders should be prepared to play different scenarios depending on how price action evolves here. Indeed, this is especially the case as the metal still remains inside a larger consolidation pattern and below long-term resistance circa $26.00-$28.00. So, the recovery we have seen since the end of September has to be treated with some caution. 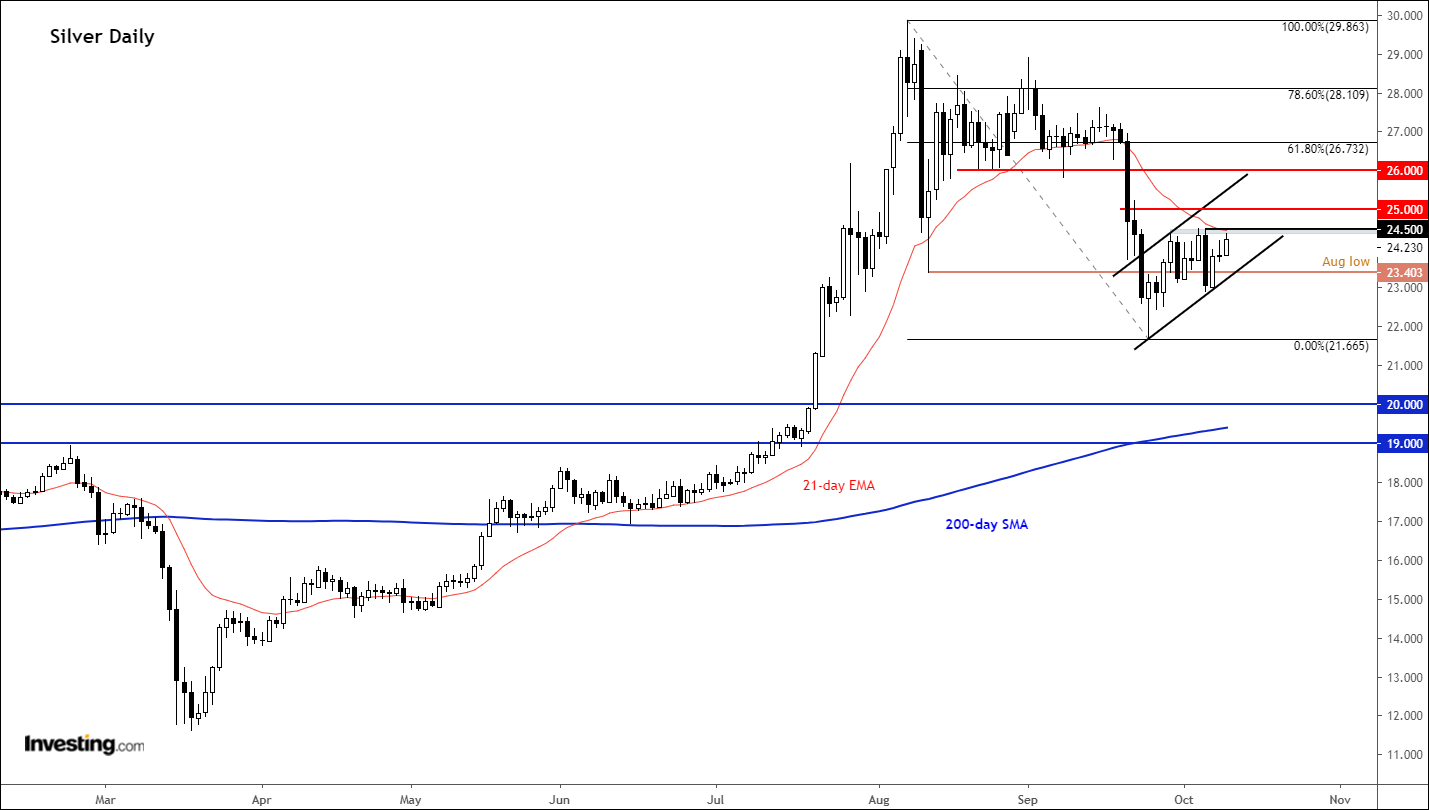 The bulls would argue that silver’s refusal to go down, despite Tuesday’s big red candle, is strongly suggesting that prices should now break higher because the bears might be trapped. So far it looks that way and the precious metal has almost taken out Tuesday’s high around $24.50, above which trapped sellers’ stop orders would surely be resting.

So, what I would like to find out next is:

If silver breaks and holds above $24.50, this could clear the way initially towards $25.00, followed by next potential resistance levels around $25.50 and $26.00. These were levels where silver had previously found some support, if you look at an intraday chart. Thus, expect to see some trouble around those levels, should it get there. The 61.8% Fibonacci retracement against this year’s high comes in at $26.73. This could be an additional, slightly longer-term bullish, target.

Conversely, if silver fails to hold above $24.50, say, after a brief break, then this could turn into a false break reversal, leading to a sharp move in the opposite direction.

An alternative bearish scenario would be if silver doesn’t take out $24.50 resistance and instead falls back sharply to take out the pivotal level of $23.60—the August low.

Under these scenarios, price action would indicate that September’s move down may have been more than just profit-taking. It could trigger a sharp drop, sending silver towards long-term support around $20.00.