Chart Of The Day (Part 2): Hedging Inflation With Platinum

Yesterday, in Using Metals to Trade Both Sides of Inflation, we noted that the dynamics of inflation were multi-faceted. Rising inflation would be positive for economic growth, job creation and employment as well as overall spending, fueling ongoing cycles of expansion. As such, trading —which rises on healthy economic growth—was the focus of our piece.

But if inflation overheats, prices could escalate too quickly, pressuring corporate profitablilty, employment and consumer spending, so that ultimately the economy spirals downward. Should that occur, a more appropriate metal to keep an eye on is . Many consider the precious metal a safe haven hedge against rising inflation.

In truth, both trades can hedge each other, though given a trade’s sensitivity to time and demand, it’s easy to lose on this dual pairing if not handled carefully.

On the other hand, platinum is in the unique position of having double utility; it can be profitable as a haven and also as a commodity that’s much sought after on improving industrial demand, since it’s a key ingredient in fuel cells and clean energy.

Also, relative to platinum, is currently trading at 1.5 times the price. Given that the two historically trade at parity, we can expect to see platinum rise versus gold. And while platinum recently reached a six-year high, gold went parabolic last year to hit an all-time high. Now, while gold is in a downtrend, platinum is in an uptrend. 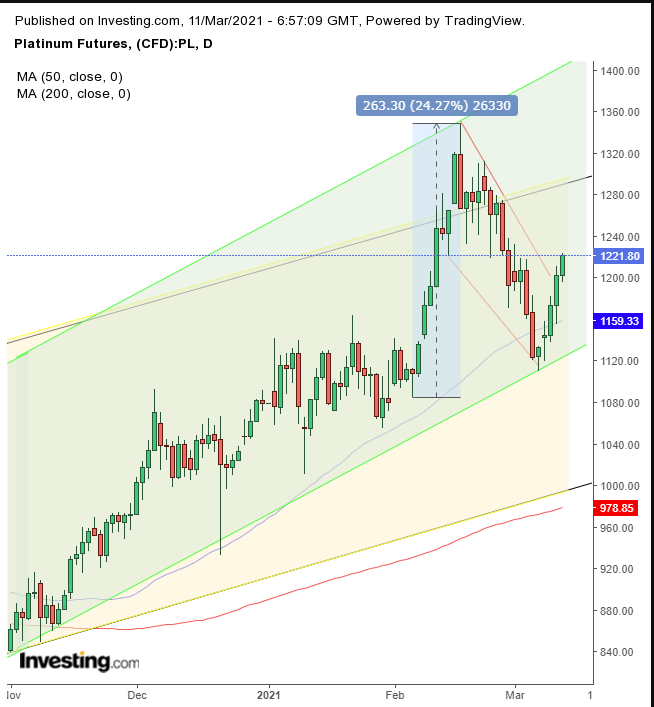 Platinum briefly traded above its rising channel since the March bottom. After it fell, the precious metal found support at the bottom of a new, steeper channel. The price rebounded from that bottom, completing a falling flag, bullish after gaining nearly a quarter of its value within just 9 trading days, from Apr. 4 to 16.

When an asset rises so rapidly and gains so much value, traders end up second-guessing themselves, thinking perhaps they went too far. So they quickly take profits while awaiting a signal about the next move.

Exiting a buy position is a sell order. All these sell orders weighed on the price, causing it to tilt downward.

However, it was within a congested range, demonstrating that all available supply found demand, presumably from traders who missed the previous move, were annoyed, and promised themselves that given the chance they’d jump in next time. The selling created the buying dip they’d been hoping for.

The price just broke the topside of the pattern, indicating all the supply within the range had been depleted, yet traders want more. That’s a barometer of their confidence on the commodity. Therefore, they raised their bids to prices above the pattern, seeking more sellers at higher prices.

The 200 DMA demonstrates the technical importance of the original rising channel, whereas the quicker, 50 DMA (blue) shows where the new rising angle is.

Conservative traders should wait for the price penetration to reach at least $1,240, then for a return move, presumably due to the end of a short squeeze, to retest the flag, in order to determine if there is demand beyond just covering shorts.

Moderate traders would wait for the price to reach $1,230, then wait for a buying dip.

Aggressive traders could buy at will, provided they do so according to a trade plan.

Author’s Note: This is just a sample. The price can dip lower than $1,200. You can wait for a possible lower dip, but that could mean you might  also miss the opportunity, if it doesn’t occur. You can increase the stop-loss range, but that would mean you’re also increasing your risk. Whatever you decide, the risk has to make sense with both your budget and the resistance. The Feb. 16, six-year high is expected to be met with supply. Therefore, unless you’re willing to wait out whipsaws, but are just looking for a quick trade over days to weeks, you might want to set your take profit below it.

Clearly, there are many ways in which you can approach this trade. You have to find the one that suits your budget, timing and temperament. Until you learn how to do that, you can take small risks for the purpose of learning, not necessarily to see a profit. If fast money is your objective, you will likely lose. Happy trading.

Biden silent on whether Cuomo should resign ...