Oil had been looking as if it were heading toward a Dead Cat Bounce, a term used when a fall is so hard that even a dead feline would bounce when it hit bottom. Prices often do the same, as dip buyers speculate the descent was too hard and too fast. But that expected bounce doesn’t appear to be happening this time, since today marks the second week of depressed prices.

The initial drop of 5.66% for took place on Sept. 17, its biggest one-day sell off since Aug. 1 — when it plunged 7.9% after the Fed dampened hopes for a and rising U.S. output kept supplies high — after the drone strikes halved the Saudi’s 10% global supply.

And the pattern now developing increases the odds for another downturn, as a look at the charts demonstrates. 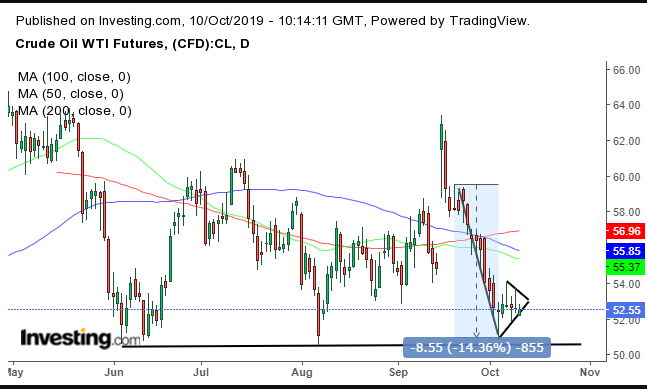 The price of WTI is flirting with a downside breakout of a pennant continuation pattern, after opening at the lowest level since June 18.

The pennant is a consolidation after a sharp decline, in this case a 14% drop from the Sept. 23, $59.39 high and the Oct. 3, $50.99 low. The pennant shaped range that follows demonstrates apparent equal supply and demand, squeezing the price till it breaks out.

Should oil break to the downside, it would demonstrate that the bearish sentiment hasn’t ended, with sellers drowning out the available demand within the contracting price range in the pennant. It would also signal they’re now lowering offers to find more willing buyers.

This move is expected to trigger long positions and increase short positions. Given that the implied target of $8 from the downside breakout, measured by the above-mentioned downward-move, would include a breakdown of a major support area above the psychological $50 level since June 5, it could be the writing on the wall for an even worse plunge.

The $50 support has been priming a triple bottom since June. Its failure would reverse the market mechanics, with bulls tracking back positions and bears encouraged to step harder, propelling prices even further down.

Conservative traders may wait for a significant close below the $50 level, followed by an attempted but failed rally, to short oil.

Moderate traders would wait for the same but not necessarily for proof of resistance, only to ride the return move for its entry closer to the new presumed resistance.

Aggressive traders may short at will, providing they do so with a trading plan that fits their account risk.