As June comes to a close, is on track for its worst monthly performance since 2016. Could this be a buying opportunity for precious metal bulls?

We don’t think so. In fact, it looks to us, based on a variety of indicators, like this is a chance to take a short position on the yellow metal.

Gold dropped to its lowest level since mid-April ahead of yesterday’s Conference Board report for the month of June. With the strengthening, and American consumer confidence rising to 127.3 over the month—bringing it back pre-pandemic levels as well as besting May’s 120.0 release—the report wasn’t good for gold.

Remember, the precious metal has an inverse relationship to the dollar, since the assets benefit from opposing economic conditions and sentiment. Plus, given that the shiny metal is priced in USD, when the currency strengthens gold becomes more expensive for the rest of the world, reducing demand accordingly.

Indeed, yesterday the greenback was less than 0.2% away from its highest point since Apr. 7. 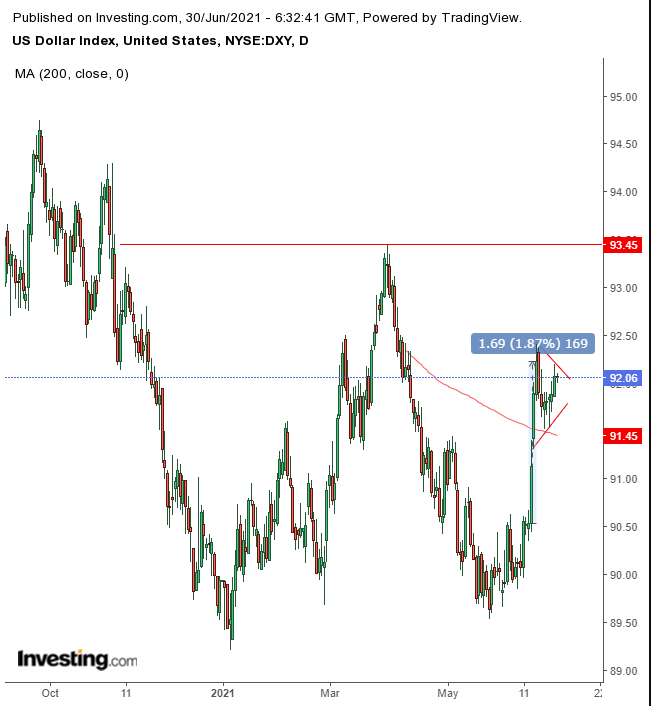 After the Fed there would likely be at least two 0.25% interest rate hikes by the end of 2023, on June 16 at 2:00 EDT, the dollar began rising, accelerating for three straight days, for the first time since early March, adding 1.9% of gains. After nearly two weeks, even with additional volatility, the USD has kept most of those gains. It’s still higher by 1.7% since the Fed meeting.

As well, “the potential for an upside surprise (from Friday’s U.S. ) that pulls monetary tapering and tightening expectations forward is looming ever bigger for investors,” said Karl Schamotta, chief market strategist at Cambridge Global Payments, speaking to CNBC.

“A number significantly above the 700,000 mark could really get the dollar freight train running, and no one wants to be tied to the tracks if that happens,” he added.

And with the currency possibly developing a bullish pennant on top of the 200 DMA, whose upside breakout would signal a repeat of the preceding rally, there could be further downside for gold.

There’s a mirror image of this activity in yields, including for the Treasury, which fell below 1.5%, suggesting inflation fears may be subsiding. Technicals for yields on the benchmark note are forming a pennant—a continuation pattern—the same as the dollar but in the opposite direction, after topping out, starting a falling channel which could continue lower.

Finally, the -to-gold ratio is nearing its highest level in more than 15 years. 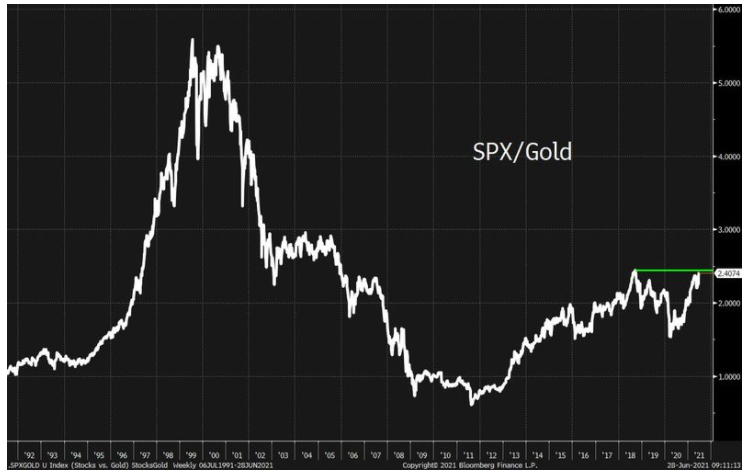 That demonstrates there’s momentum for risk, at the expense of capital preservation, which mirrors the lack of interest in Treasuries as demonstrated by the slumping yields.

Having said all that, the supply and demand balance for gold on its technical chart is also not particularly optimistic. 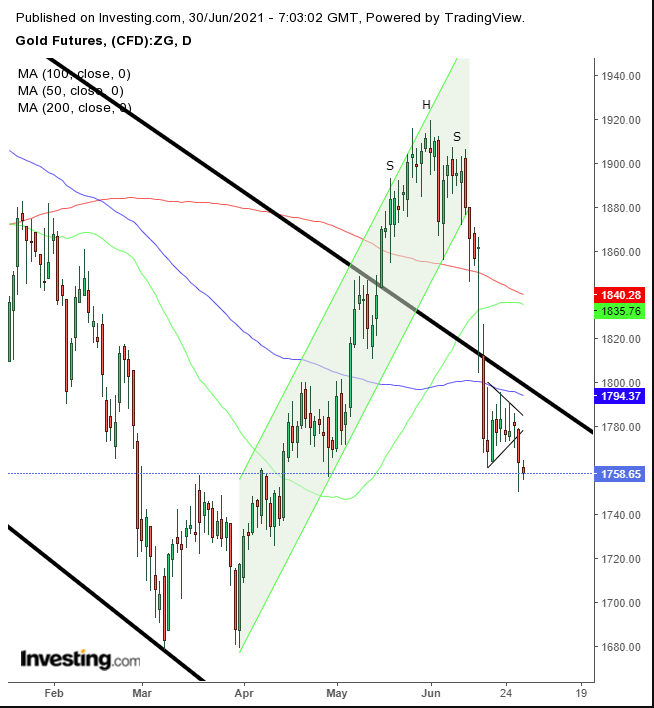 The precious metal completed a short-term H&S top, whose neckline was the 200 DMA, which proceeded to reject the 50 DMA—demonstrating that the long-term bearish trend outlined by the falling channel since the 2020 record high continues, as the 100 DMA weighs on the pennant.

Only after the price plunged right back into the falling channel did the market take a breather. This provided short-sellers the opportunity to cover shorts. It also allowed new bears—upset about missing a 7.25% plunge in six days, of which 4.4% occured in just two days (June 15 and 16), around the Fed’s monthly meeting—to join the fray, thereby completing the H&S top.

Yesterday’s renewed dollar strength, leading up to the better-than-expected consumer data, and continuing after the data was reported, has pushed gold into a downside breakout of the bearish pennant, suggesting it’s on the path to retest the March-April lows.

Conservative traders should wait for gold to trigger a return-move to test the pennant’s veracity.

Moderate traders would wait for the same corrective rally but for the better price, if not for confirmation.

Aggressive traders could enter at will, according to a preset plan that provides a sound trade. Here’s an example:

Author’s Note: The above is just a sample. There are diverse ways to approach this trade. This one is just our interpretation, which may be wrong. Trading success is not about knowing the future but about understanding and getting on the side of statistics. That requires multiple trades, according to a system that fits your budget, temperament and, of course, timing. Until you learn how to do this, follow our samples, for the purpose of learning, not for profit, otherwise you’ll get neither. Guaranteed. And no money back.