Chart Of The Day: Is Gold Ready For Another Rally?

In an interview on Sunday night, Treasury Secretary (and former Chair of the Federal Reserve) Janet Yellen said that higher interest rates would be positive for US policy makers and the country. She said:

“If we ended up with a slightly higher interest-rate environment it would actually be a plus for society’s point of view and the Fed’s point of view.”

But let’s back up. It isn’t the Treasury Secretary’s point that raising interest rates would benefit the economic recovery after perhaps its worst disruption in history. Rather it appears to us that she is trying to fulfill her true purpose: promoting her president’s agenda. And she has done this by arguing that President Joseph Biden’s $4 trillion spending proposal would be positive for the economy, even if it leads to a hike in interest rates.

Whenever we see a ‘whether or not’ comment like Yellen’s we tend to pay extra attention. We consider it a somewhat defensive posture. Case in point, the Fed doesn’t seem to be on the same page when it comes to higher interest rates.

So far, there is little market reaction to what is a dramatic statement. This apparent confusion between the Fed and the Treasury—and a former Fed Chair, no less—could be the stuff that creates market swings. Any expectation of a rate hike will likely drive the dollar higher and thus weigh on commodities.

is slightly lower following the comment, but it may just be a buying dip. 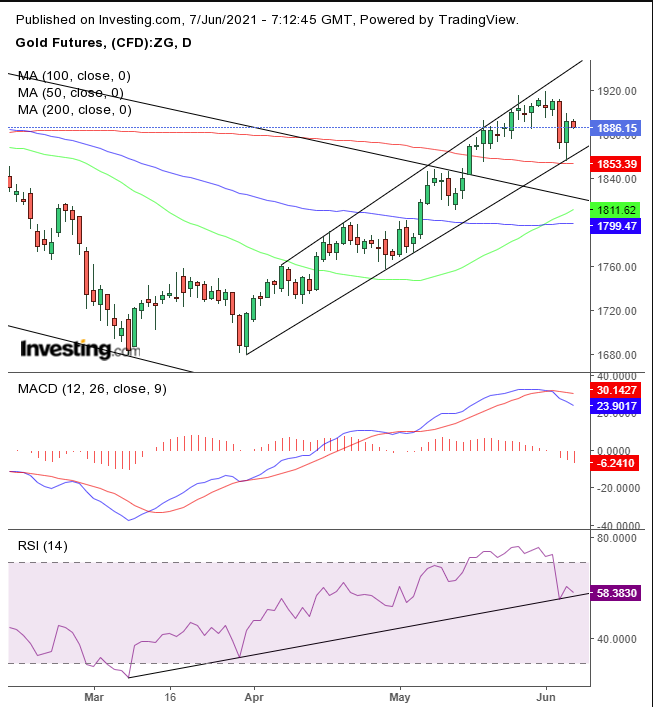 Gold had started to slide last Thursday. We have been waiting since mid-May for a return move after the yellow metal broke out of the falling channel since the 2020 record peak, as well as the 200 DMA. While the MACD’s short MA crossed below the long MA, providing a sell cross, the RSI bounced above its rising channel since the March low, just as the price did.

For as long as the price is above the falling channel, and certainly while it is within its rising channel, we are going to remain bullish.

Conservative traders should wait for a new record high, so that the medium term price, which is still down, would work in tandem with the rising long-term trend.

Moderate traders would risk a long trade, if the price allows an entry point with small exposure, as close as possible to the bottom of the rising channel, considering that the June 1 high of $1,919.20 provides a resistance, and the risk-reward ratio has to make sense.

Aggressive traders could go long at will, provided it is in accordance with a coherent trade plan that they stick to. Here’s an example: