Chart Of The Day: Has Silver Finally Cleared The Way For A Big Breakout?

With the and bond yields, including on the note, falling noticeably this week, so too have the opportunity cost of holding non-interest-bearing assets. and have stormed back to life as a result. Is it going to be a sustainable rebound this time, or another false hope for the precious metals?

Although the US dollar eked out a gain on Thursday against the likes of the , and , the reserve currency has had a poor week, especially considering the strength of US data. In fact, we have had lots of good news from the US economy in the last couple of weeks. These include, among other things, a big number, stronger data and not to mention the blowout figure. Bank earnings have all topped expectations. Yet, despite all of this, US bond yields have fallen, pushing the dollar down.

Consequently, the dollar index has given back most of the gains made in March. The greenback has weakened against all major currencies with emerging market currencies and commodity dollars performing the best amid ongoing risk rally. The reflation trade has also caused the major US stock indices to break to clear blue skies, sending and prices also higher this week. Even bonds have found some love after their recent sharp sell-off, causing their yields to dip. This has allowed non-interest-bearing assets like gold and silver to rebound sharply.

So, it looks like investors are not very concerned about short-term strength in US data or inflation, after all. Instead, they are happy that the economy is rebounding, fuelling the so-called reflation trade (long stocks and short the dollar against, well, everything). It reminds me of the trend when everything bottomed out in March 2020, as stocks, cryptos, gold, silver, copper and foreign currencies all surged higher. Are we seeing the continuation of that trend? Well for the stock markets, there’s hardly been a pause in that trend, but with the dollar coming back strongly in Q1, it looked like the FX markets were pointing to another direction. However, at the start of this month and quarter, FX investors seem to have decided to once again follow the stock markets and the reflation trade.

Meanwhile from a purely technical point of view, silver is looking interesting again as it has finally resolved the lengthy consolidation from THIS falling wedge pattern: 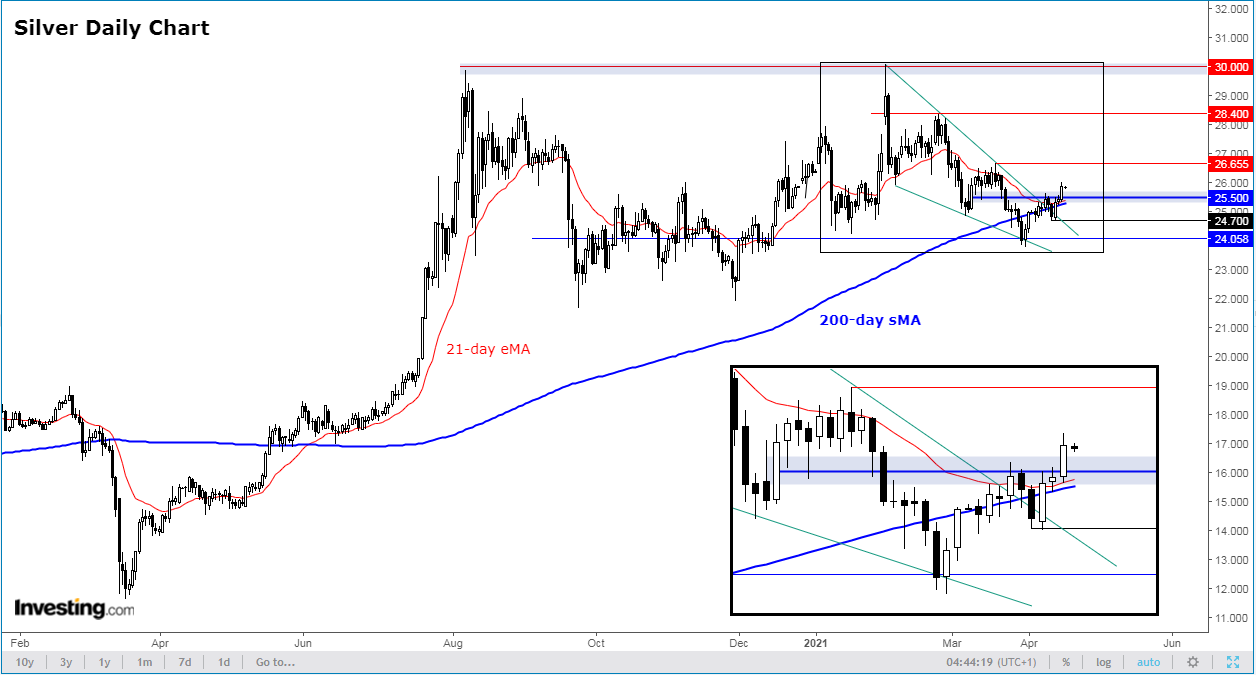 Let’s see if it will now stage another major rally, or whether this is yet another fakeout.

The falling wedge is a bullish continuation pattern and so with silver breaking out of it, this is technically a very nice bullish development.

If the breakout can hold, then silver could climb towards $26.65 initially, ahead of $28.40 next, and possibly $30 thereafter. Key short-term support is now around $25.50, the base of the breakout, below which we have the 200-day simple average converging with the 21-day exponential. The low that was made prior to the breakout comes in at $24.70. This is now the line in the sand for the bulls. If silver were to break below $24.70 then it would confirm that the latest breakout attempt has again failed.

All told, it looks like the market is convinced that inflation is not getting out of hand, causing investors to unwind their bets about a quicker tightening of monetary policy than expected. This view has been boosted by Federal Reserve Chairman Jerome Powell who made it clear that even though he’s optimistic on the economy, the rise in inflation is likely to be transitory. If this trend continues, we should see bond yields fall further, boosting the appetite for gold and silver. In the longer term, I still believe that silver could be heading well above $30 regardless of the direction of yields. This is due to expectations that industrial demand for the metal will rise over time, for example for the development of solar panels as the global drive towards cleaner energy takes hold.

No One Is Watching Gold, They Should