Chart Of The Day: Gold’s Inflation Indifference Could Be Bearish Signal

Yesterday’s release caught traders unprepared. Both the headline and readings for the month of June surged 0.9%, showing that inflation spiked nearly double the already expected 0.5% rise in prices.

Despite the unexpectedly large jump in the costs of goods and services, key components of the economy whose small fluctuations generally trigger market gyrations, remained relatively unchanged.

As perhaps the most prominent inflation hedge, the price of gold should have soared. Instead, after whipsawing between 0.7% gains and 0.4% losses, it closed 0.2% higher. Why we wonder was the market so indifferent?

It appears investors have faith in the Fed’s ongoing ‘mantra’ that the current rate of inflation is ‘transitory,’ meaning it will pass.

It seems then that the precious metal is moving higher for other reasons, in its capacity as a safe haven from a variety of geopolitical catalysts including the ongoing Delta variant contagion and oil production targets which OPEC+ is having trouble resolving.

If gold had been supported by inflation concerns, it would be up more than its 2.5% in the last two weeks. Which is, of course, not the case based on the sharp drop in mid-June and slow grind afterward, visibile in the technical chart. 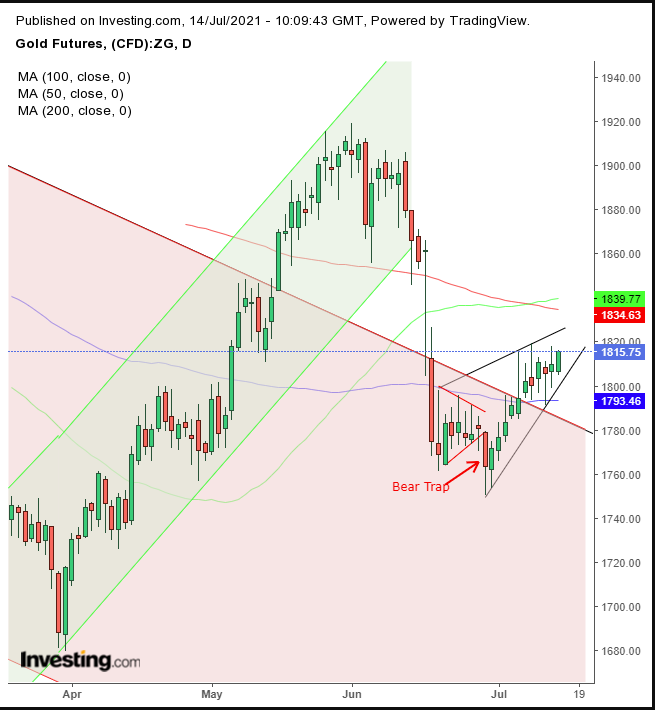 After gold blew out the bearish pattern at the core of our previous trade, that move was followed by a six-day winning streak, the longest upmove since February. But now we’ve identified the return of bearish control.

The price has been churning for the 7th session, below $1,815, at what appears to be the apex of a rising wedge, bearish after the six-day, 7% plummet that preceded it. That sharp down move is the setup for the bearish dynamics within the rising wedge, a downside continuation pattern. The sudden move caught traders unaware, on either side of the trade, both the winners, and the losers.

The winners, the bears, are now presumably experiencing a wide range of emotions, from exhilaration over the windfall, to greed, as their appetites were whetted. Bulls may be feeling cautious and possibly a bit burned with long traders still smarting over the 7% plunge that preceded the wedge. They may have now smartened up, and are hopeful of another such drop—just like their bearish peers.

The advance, slowing within a crowded trade, demonstrates that for all the sudden influx of demand formed by short covering, there is sufficient supply to keep it from creating momentum. A downside breakout would prove that supply has overtaken demand and presumably generate the momentum needed for another downturn.

The wedge’s placement in the chart supports the importance of this pause as a potential catalyst. It is forming right at the top of the falling channel since the 2020 record peak, as well as below a Death Cross.

Conservative traders should avoid the kind of bear trap that occurred after our previous post by a close below the June 12, 1,791 low, followed by a return-move that would confirm the downtrend.

Moderate traders would follow the same path of their more cautious peers, but await the corrective rally for a better entry, not proof of supply.

Aggressive trades could short at will, provided they understand the pattern is complete only upon a decisive downside breakout, as long as their trading plan justifies the risk which they accept. Here’s an example: