The price of has been moving sideways for a month now, as investors continue snatching up sovereign debt certificates including the US benchmark Treasury note. 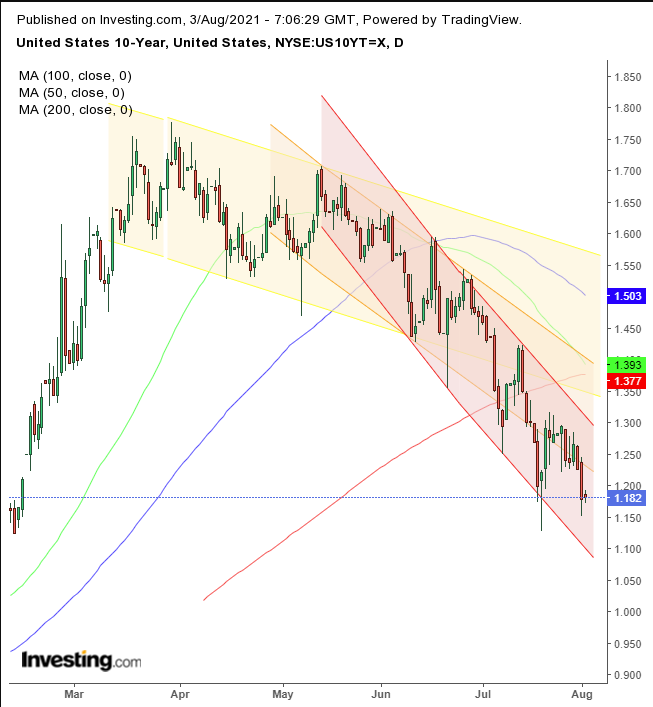 Yields—which are negatively correlated to Treasuries so that as they’re snapped up their rates slump—have been falling. Meaning Treasury prices have been accelerating on increasing demand.

Notice, the repeatedly steepening angle, as the rally in bonds accelerates, pushing yields progressively lower within an ever more precipitous falling channels.

A falling channel is a clear message from both buyers and sellers that there’s a defined boundary for the moves, an orderly decline in yields as supply and demand agree that Treasuries should rise and fall within an uptrend line while their rates move within a downtrend. This could involve the same parties who might be buying Treasuries then taking profit, or it could be sellers participating in a similar cycle of selling, then buying again at higher rates. Or it could be different parties entirely.

The 50 DMA for yields is heading toward the 200 DMA, threatening a Death Cross, aptly named because it warns of a downward trend shift.

Yields have thus far reached their lowest level since Feb. 11. However, in terms of “real yields” they’ve reached a record low.

Real yields refer to the buying power of the payout after accounting for . This, however, presents a market incongruity. If inflation escalated enough to pressure a sovereign bond’s payout to a record low, why would investors continue buying them?

Increasing concern about the outlook for the much vaunted US economy recovery appears to be the trigger. The global spread of the Delta variant, compounded yesterday’s weaker American data which contributed to yesterday’s dip.

That appears to form a counterintuitive dynamic; inflation, with its rising prices, should be a sign of an economy that’s ramping higer, or at least appearing to do so, which isn’t currently the case.

But right now, investors who are snapping up Treasuries at current rates clearly don’t expect to receive the payout at some future time, or at least not a worthwhile “real rate payout,” having concluded the speed of amping up inflation cancels out the yield’s purchasing power, at least in the near future.

The dilemma for gold is that one of its primary functions among investors is as an inflation hedge. The fact that it’s not moving appreciably higher means either investors have already bought into the Fed’s repeated mantra that inflation is transient, or right now, the herd is simply stampeding into Treasuries, without considering additional, perhaps more appropriate safe haven assets.

Whatever the case, the shine of yellow metal looks to be dimming. 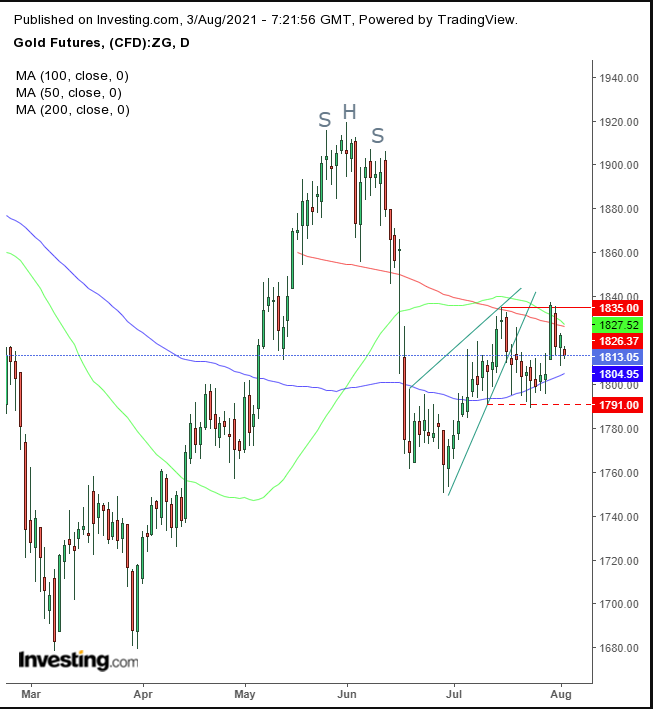 Gold has retested a rising wedge and found resistance, setting up a potential, small double top. The 50 DMA is bearing down on the 200 DMA, which is falling, potentially setting up an especially bearish Death Cross. This shows that recent pricing is weakening at such a breakneck pace, it’s even worse than the outlook for longer-term pricing, which has already been falling.

A drop below $1,791 would suggest an end to the wedge’s return-move, and another leg down, after gold topped out in mid-June, falling below the 200 DMA, a natural neckline to a small H&S top.

Conservative traders should wait for the price to complete the double-bottom, then retest it from below, before risking a short position.

Moderate traders would wait on a short for the downside breakout of the double-top, then wait for the price to retrace its move, for a better entry, if not for confirmation.

Aggressive traders could enter a short position at will, provided they have a preset trading plan that justifies the risk of a whipsaw. Here’s an example: