Since it double bottomed on Apr. 15, we’ve been bullish on …at least for the short-term. We’re now extending that call, though we continue to maintain our bearish stance on the yellow metal for the medium-term.

It’s the outlook for that’s now driving markets overall, and gold in particular.

To be clear, the precious metal is first and foremost an inflation hedge. The potential for escalating inflation is apparently persuading investors to increase their gold positions. However, we’ve seen how fickle those expectations have been.

There’s no real consensus on whether there will actually be any serious inflation, whether it will extend and if it will hurt—or even help—the economic recovery. And of course, perhaps most worrying for equity markets, there’s plenty of uncertainty on whether the Fed will raise rates earlier than anticipated.

Let’s focus on that last point. While ascending inflation benefits gold, as investors turn away from the diminishing buying power of the dollar, were the Fed to hike interest rates, the dollar would be a beneficiary, at the expense of gold which provides no yield.

That leaves traders to decide whether they trust the Fed’s oft-repeated, lower-for-longer promise on rate hikes, along with the uncertainty of when other central banks might hike or remain steady, which would either give the dollar an interest-rate differential advantage, or perhaps not.

Based on the technicals for gold, investors seem to be saying that in the short term they believe inflation will rise but not rates. 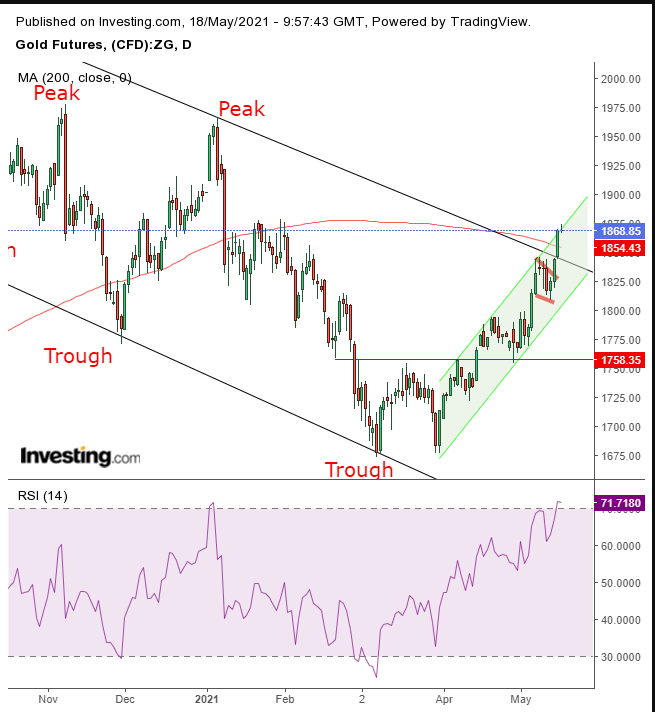 It’s important to note though, that this position is contrary to the medium-term downtrend. In other words there remains an underlying bias for the commodity to resume the downtrend. To be fair, we’ve been saying the same thing since Apr. 15.

At that time we tempered our short-term bullish call with this warning. But while the medium-term outlook didn’t hamper the short-term bullish call till now, that doesn’t mean it won’t yet happen. Unfortunately, we don’t know whether it will. We can only describe the risks as clearly as possible, so readers can make a better decision.

Also, even if in the short-term gold heads toward $1,900, it could still fall from the top of its rising channel in a return-move to the flag, before it resumes toward its $1,900 implied target. So beware.

The RSI has hit its highest overbought condition since Jan. 5, from where the price of gold fell as much as 15%.

Conservative traders should not trade against the broader trend.

Moderate traders could enter a long position after the price finds support above the flag or the channel.

Aggressive traders could enter a contrarian short, from the top of the rising channel, counting on a pullback, if they accept the risk of going against the short-term trend. As always, money management is crucial.

Author’s Note: This is just a trade sample. There are different approaches to the same trade, depending on one’s personal style. You need to learn how to draw a trade plan customized to your budget, timing and temperament. Until you learn how to do so, feel free to take our trade samples but only as learning exercises. If you’re looking to get rich quickly you’ll end up with no money and no skills for making money as a trader.

Silver Breaks Out On Gold Rally, With ...