Chart Of The Day: Gold On Hold, Waiting For Jackson Hole To Unfold

opened lower on Thursday and continued falling, wiping out all the gains made during Monday’s strong rally. Which means the precious metal is now little changed for the week.

Trading on the precious metal remains in a holding pattern ahead of the Federal Reserve’s which begins today.

Market players are divided on whether the US central bank will announce at this weekend’s event whether it will begin tapering its unprecedented bond-buying program. Some, like BNY Mellon’s chief economist Vince Reinhart, expect Fed Chief Jerome Powell to pull a “on the one hand and other the other hand,” by saying nothing meaningful regarding direction.

Others, chief among them analysts at Goldman Sachs, have raised odds the Fed will indeed announce it is to begin reducing its massive balance sheet.

Should the Fed start tightening, investors are concerned there could be a repeat of the so-called ‘taper tantrum’ defined as a “collective reactionary panic that triggered a spike in U.S. Treasury yields” seen in 2013. Jeffrey Gundlach, founding CEO of DoubleLine Capital and dubbed the “bond king,” acknowledged the market could be pressured by this policy change.

We can’t forecast whether Powell will turn more hawkish, or simply repeat past hemming and hawing without any concrete actions to follow. Based on the technicals for gold’s supply and demand, it appears traders have no idea either. It’s anyone’s guess right now which way the yellow metal will head next. 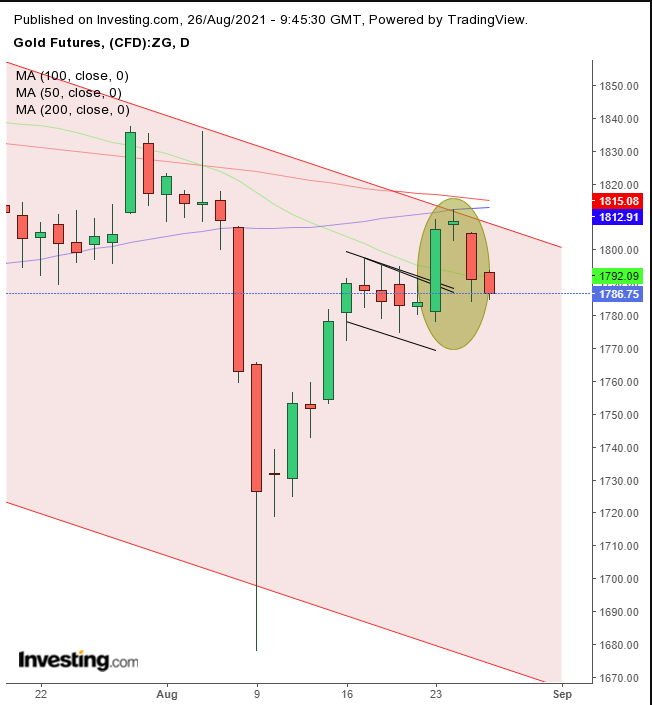 Gold completed an Evening Star, a three-day candle depicting a reversal. This occurred at a place on the commodity’s chart that underscores the potential bearish power it holds.

The Evening Star developed precisely at the top of gold’s falling channel, Moreover, both the 100 and 200 DMAs joined the channel, underscoring how important this price level is. The 50 DMA realigned with a possible falling flag, bullish after the preceding rally from the channel’s bottom.

The flag has been providing support now for the second day, which demonstrates its potency, even amid an Evening Star that’s teamed up with a falling channel and moving averages creating a confluence of resistance. Also, the 50 DMA fell below the 200 DMA earlier in the month, triggering a Death Cross.

In other words, traders have positioned themselves between support and resistance, as they wait for an indication from the Fed on where fiscal policy could be headed next.

Conservative traders should wait for the uncertainty to resolve, with either the price breaking free of the falling channel or blowing out the flag.

Moderate traders could buy if the flag maintains support, sell if the price closes below its top.

Aggressive traders would buy due to the extraordinary risk-reward ratio offered as the price sits on top of the flag.