Yesterday, got a boost from Fed Chair Jerome Powell, during his monthly, post-FOMC meeting . Once again, he downplayed the inflationary pressures seen recently in the US economic data.

“It’s not time to start talking about tapering,” he said. After which he added:

“We’ll let the public know well in advance. It will take some time before we see substantial further progress. We had one great . It is not enough to start talking about tapering. We’ll need to see more data.”

Referring to the metric, which the US central bank favors as an inflation indicator, Powell said:

“PCE inflation is expected to move above 2% in the near term. But these one-time increases in prices are likely to have only transitory effects on inflation.”

The reason the Fed has been so vocal about the insignificance of this inflation is that the YoY comparison is to 2020, when the economy came to a standstill at the height of the COVID-19 outbreak. That’s because there’s nothing impressive about data that’s higher than normal when it’s compared to a period that was significantly below normal in myriad ways.

As well, the running assumption by policy makers is that after consumers unleash pent up demand, it will temper, especially when government stimulus checks stop coming.

All this has added momentum to the yellow metal’s short-term uptrend. Traders can take advantage of this in one of two ways: either ride the trend higher or get ready for a medium-term short position before the precious metal tests the long-term uptrend. 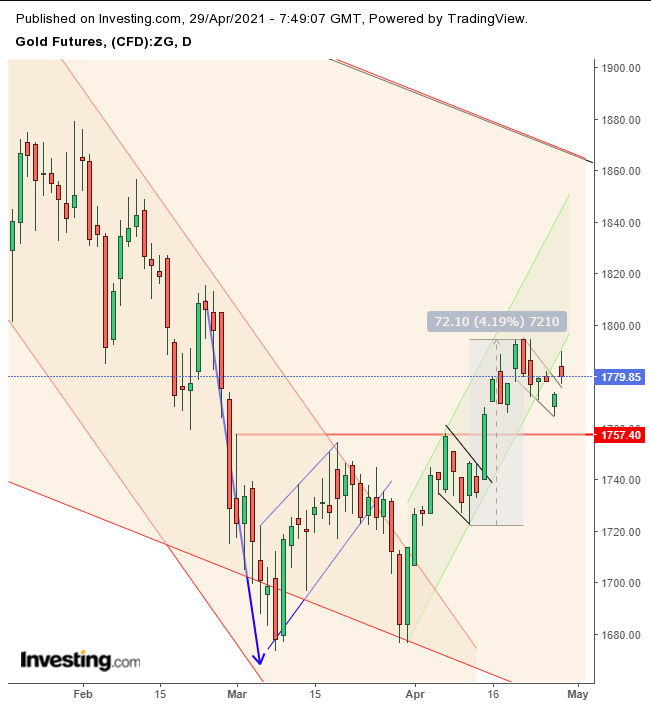 Gold just completed a falling flag, bullish after the preceding 4% jump in the week that preceded it, a sharp move relative to the commodity’s current price behavior.

This is the second consecutive falling flag since the price bottomed, completing a double bottom, with the help of the first flag. The second flag is another push on its way to retest the top of its falling channel since the 2020 all-time high.

We’ve published multiple bearish calls on gold since September 2020, as recently as the beginning of this month. However, the Fed’s relentless attack on the outlook for rising rates reversed the trajectory, with the double bottom blowing out a rising flag, which would otherwise likely have pressured gold lower, along its more recent, steeper falling channel, through the bottom of the broader, slower one.

Now, after the completion of the second flag that completes a return-move, both the double-bottom and the first bullish flag are reaffirmed.

Conservative traders should wait for the price to top-out at the channel top, if they want to short along the medium-term falling trend.

Moderate traders would wait for the price to close above the $1,800 level, then wait for a buying dip.

Aggressive traders could go long at will, if they accept the higher risk proportionate to the higher reward of moving before the rest of the market. Money management will be just as important as key analysis. If you don’t know how to draw a customized trade plan, here are the basics: