Friday’s blew past expectations. The release showed that in July the US added more jobs during the previous month than it had in almost a year.

Though the NFP print provided another positive signal for the US’s economc growth, it added additional pressure to the already-struggling price of .

As well, the declined more rapidly than anticipated, dropping to 5.4%, though 5.7% had been forecast.

All of which has shifted investor focus away from jobs growth, one of the Fed’s three mandates, toward the two remaining—stable prices and moderate long-term interest rates. Now that the economy appears to be heating up, the Fed will be forced to move more quickly on tempering inflation and preserving price stability.

This shift in policy outlook, amid low liquidity, as investors have been focusing on Treasuries at the expense of gold, cleared a path for yellow metal investors to trigger stop-losses and exit long positions—which immediately diminished demand—fueling a flash crash as the trading week came to a close.

Here’s how these fundamental and technical phenomena look on the technical chart. The pattern might also help us attempt to plot a course forward on the precious metal. 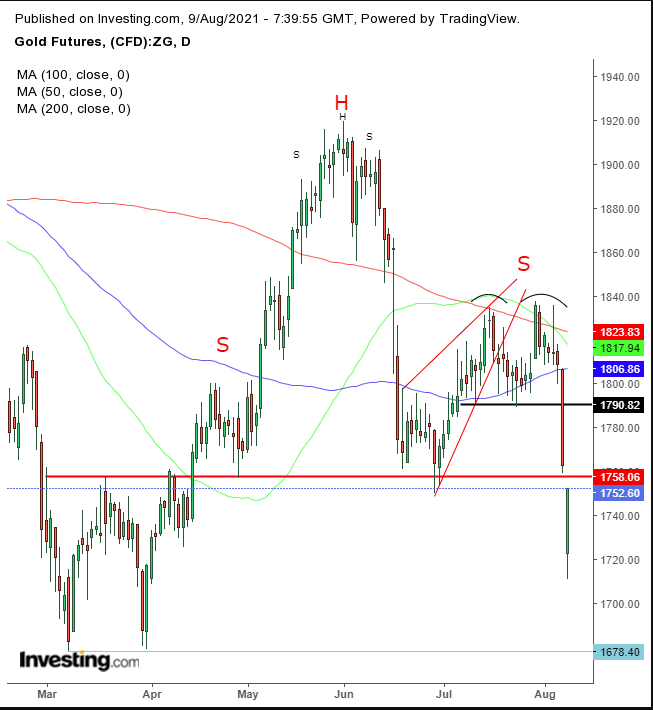 Gold completed a small double-top, reinforced by the 100 DMA, a failure of the short-term uptrend to continue higher. It marked the completion of a return-move to the rising wedge, a profit-taking period after the 8% drop following a H&S top, whose neckline was the 200 DMA.

The extended selloff we’re seeing today completed a larger H&S (However, it’s diminished by the brief nature of the preceding rally).

The 50 DMA, which just managed to cross above the 200 DMA, triggered a short-lived Golden Cross. But it fell back below the 200 DMA, demonstrating that short-term pricing is weakening relative to longer term pricing.

If the price dips below the Mar. 8, $1,678.40 low, it will have extended the downtrend since the August 2020 record peak. Note, the yellow metal rebounded from its falling gap, nearly filling it, but despite trading at the very top of the session, it remains below the top of the gap, demonstrating that sellers outweigh buyers at this technical juncture.

However, the secular trend—reflecting the very long-term, which ignores shorter term peaks and troughs, in place since the 1999 low—is still up.

Conservative traders should wait for the price to register a peak lower than that seen in March, before shorting.

Moderate traders would wait for resistance to confirm the significance of the $1,760 level, as the proposed neckline of a H&S top.

Aggressive traders could short now, provided they do so according to a trade plan that justifies the risk. Here’s an example: