Can Palladium Win The Award For Best Performing Commodity In 2019?

In an Oscar-worthy showing, palladium qualified on Thursday as the second costliest metal ever, beating after an eight-year struggle. Two nominations now await the auto-catalyst metal: Best Performing Commodity for 2019 and $2,000 Metal Award.

Both titles appear to be within palladium’s reach as its are now up 63% on the year — more than any commodity — while its was at a record of $1,966 per ounce at the time of writing, less than $35 from the magical $2,000 target. 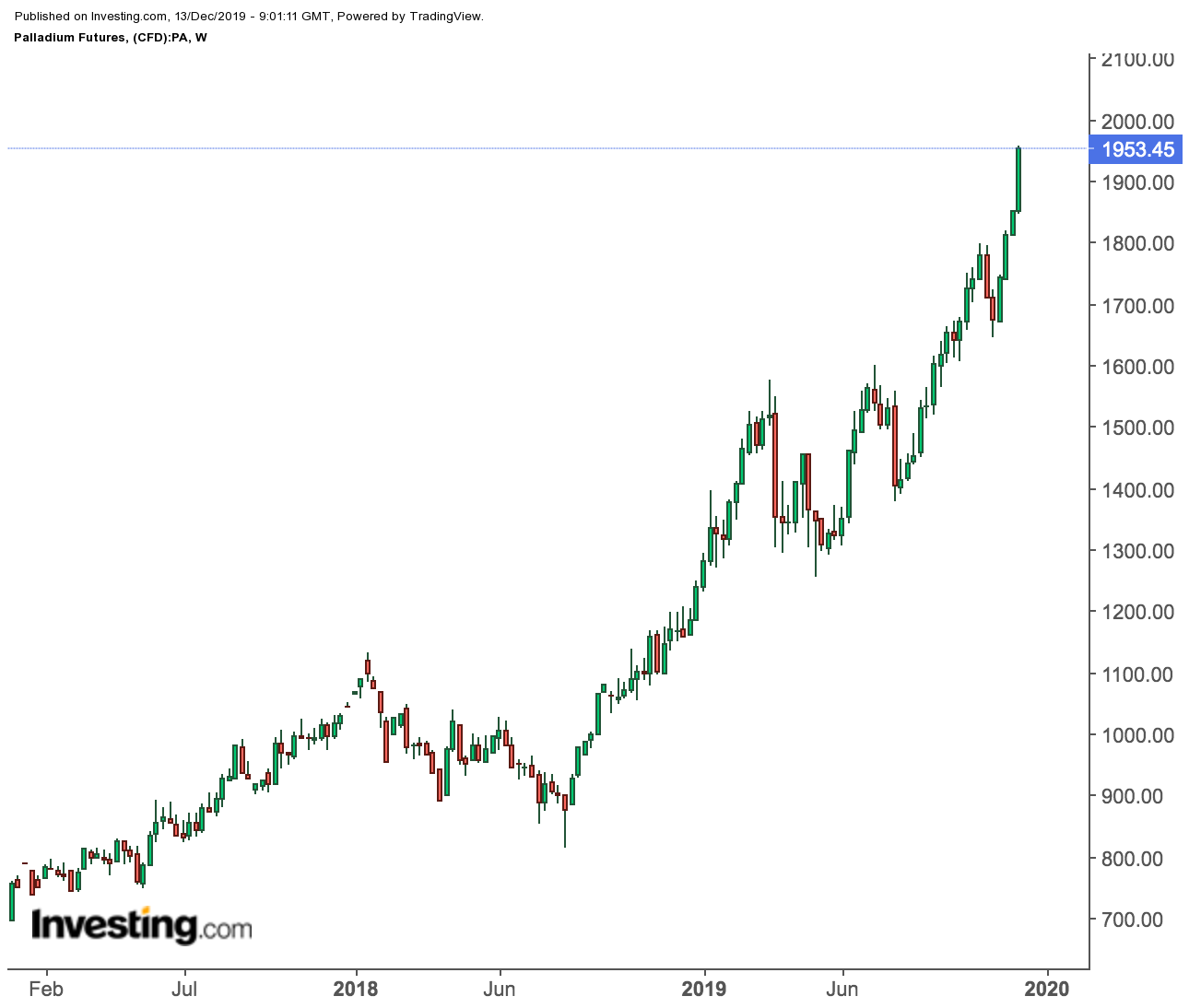 But given the unpredictable nature of commodity markets — and the sheer volatility possible sometimes in a day — palladium might achieve just one of these honors.

Palladium Still Wouldn’t Achieve Highest Price Ever For A Metal At $2,000

But it will still fall short of another precious metal that had set even higher historic peaks before.And that metal is , often described as sister-metal to palladium. Platinum had gotten to as high $2,276 per ounce just before the financial crisis of 2008 — a record not many may remember or even know, given its contrastingly poorer standing now to palladium.

In Friday’s trade, platinum was cheaper to palladium by more than $1,000 an ounce. This despite it being the original leader of the six-metal Platinum Group Metals (PGMs) which includes palladium and four other metals that are chemically, physically, and anatomically similar — iridium, osmium, rhodium and ruthenium.

The disparity between platinum and palladium is even more astonishing if their basic functions are taken into consideration. Both are essentially auto-catalysts and emission purifiers; only that platinum is used in diesel engines, while palladium works best for gasoline-powered cars.

The Volkswagen (OTC:) diesel emissions cheating scandal of 2015 had severely impaired the reputation and output of diesel cars along with prices of platinum, which have never really reached their full potential since. A ramp-up since in electric vehicles has also weighed on diesel cars.

This year, as palladium crossed $1,300 territory to set record highs almost every month, if not week, due to critically short supplies coming out of Russia and South Africa, talk resurfaced about the potential of cheaper platinum substituting palladium.

But automakers argued that entire engine and emissions processes might have to be retooled for such purposes, incurring time and expenditure that wouldn’t be beneficial compared to palladium’s relatively small cost component in a car.

So, What’s Behind This Crazy Palladium Rally?

As reported over the past week, the momentum behind palladium is due to both panic and opportunistic buying by consumers and financial players reacting to flooding in South Africa that triggered power blackouts that in turn shut down mines producing palladium ore in that country.

For a commodity already feared to be in a supply squeeze, the South African crisis unleashed a new wave of hysteria that shut all logic out of pricing, said analysts.Daniel Briesemann, precious metals analyst at Commerzbank AG, captured the mood succinctly:

“It seems that nothing can slow palladium.”

“Even though we regard the steep price rise as exaggerated, there is no end in sight to the rally.”

So, How Much Higher Can It Go?

For what it’s worth, Investing.com’s Daily Technical Outlook has a near-term top-end resistance of $1,972 for spot palladium.

But that’s barely a target, considering where the price has gotten to.

Individually, there have been outlandish forecasts of above $8080 by Gov Capital, which expects that target to met by mid-November 2024.

For now, $2,000 looks like a realistic target, and it might have been achieved by the time you read this — although there’s no certainty on whether palladium will close the year above or below that.

Illegal immigrants to be able to get ...