Buckle Up: You’re On The Crude Rollercoaster

Crude traders, fasten your seat belts: This market might be in for one heck of a ride.

Oil prices are experiencing some of their greatest volatility ever as the U.S.-China trade war yanks crude around like a yo-yo.

Case in point: Tuesday’s rally on the Trump administration’s decision to delay tariffs on some Chinese imports.

On any other day, oil prices would have slammed through the floor on fears that the trade war was worsening. This time, they jumped 4% on optimism that U.S.-China relations may actually be mending.

Such gyrations prove one thing: that fundamentally oil barely makes a difference on its own as a tradable commodity, without the additional trade and geopolitical baggage.

Notwithstanding the weekly inventory data released by the U.S. Energy Information Administration (EIA), OPEC cuts themselves might have limited impact on the market going forward, as Saudi Arabia overuses the theme of supply squeezes while U.S. production continues ramping up.

But all these are fodder to the bigger stories in oil, and one of those stories is that the swings in crude prices are probably going to get worse—which is good for those trading primarily the volatility, or just seeking big daily moves to pad their trades.

The CBOE crude oil volatility index, or , has seen outsize moves since the start of August, aligning perfectly with the swings in , the U.S. crude benchmark.

The index, which applies the CBOE methodology to the United States Oil Fund (NYSE:) to measure the market’s expectation of the 30-day volatility in crude, spiked as the month began, surging to 38.64 as WTI slumped 8% on Aug. 1. That move came after U.S. President Donald Trump announced the nation would impose a 10% tariff on $300 billion of Chinese goods from Sept. 1.

The OVX’s next spike was on Aug. 5, as WTI fell again, but by a relatively less impactful 1.7%. The move came after a crude rally of 3.2% the prior day, which again kicked up volatility. The OVX hit 38.79 on Aug 5 after China devalued the , letting it tumble to a decade-low beneath 7.0 to the dollar. Beijing also announced it was stopping all U.S. farm products.

But the index’s biggest move for the month arrived two days later, on Aug. 7. The OVX surged to 40.61 as WTI slumped again, this time by 4.7%. This move was after the first in eight weeks that stunned the market. 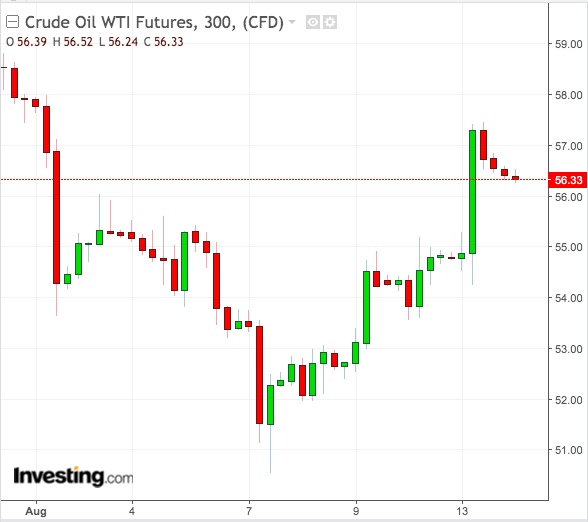 Since then, WTI has rallied nonstop for four sessions as OPEC kingpin Saudi Arabia vowed to prevent a market crash akin to 2018 through supply cuts that would exceed the 1.2 million barrels per day the cartel had committed to.

The commodity has gained about 11% since Aug. 7, posting its strongest four-day leap since December 2016. , the benchmark for oil outside of the U.S., has surge almost 9% in the same period.

The OVX hasn’t registered any untoward move since as the market has been going in one direction—up—rather in zig-zag fashion.

But that could change with data from the American Petroleum Institute (API) indicating that stocks may have built for a second straight week.

In an inventory snapshot issued late on Tuesday after WTI’s settlement in New York, the API said stockpiles rose by 3.7 million barrels for the week ended Aug 9, versus forecasts for a decline of 2.78 million barrels.

The institute cited an identical build of 3.7 million barrels in gasoline, which had been forecast to expand by just 26,000 barrels. But it reported a 1.3 million barrel drop in stockpiles of distillates, contrary to the 985,000-barrel build expected by the market.

At 10:30 AM ET today, the EIA will prove how accurate the API data is when it reports official inventory data for the week ended Aug 9.

Phil Flynn, senior market analyst for energy at Chicago’s Price Futures Group and an avowed oil bull, took umbrage at the identical change cited by the API for crude and gasoline.

“I think we have to wait for EIA. API numbers look like they are fixing (the previous) week’s 3 plus million draw.”

Referring to his own forecast ahead of the EIA numbers, Flynn added:

“We will hold out for our 4 million-barrel draw.”