OPEC is going to do what it’s going to do. And beyond cutting production, there’s nothing the cartel can do to push higher.

Yet, the epic demand destruction to crude caused by the coronavirus might not be something that can be fixed as easily by the one-cut-fits-all approach of the Organization of the Petroleum Exporting Countries.

This isn’t to say that reducing 600,000 barrels per day — or 1 million, or whatever the number the Saudis and Russians agree on when they — won’t give crude prices the floor they need. 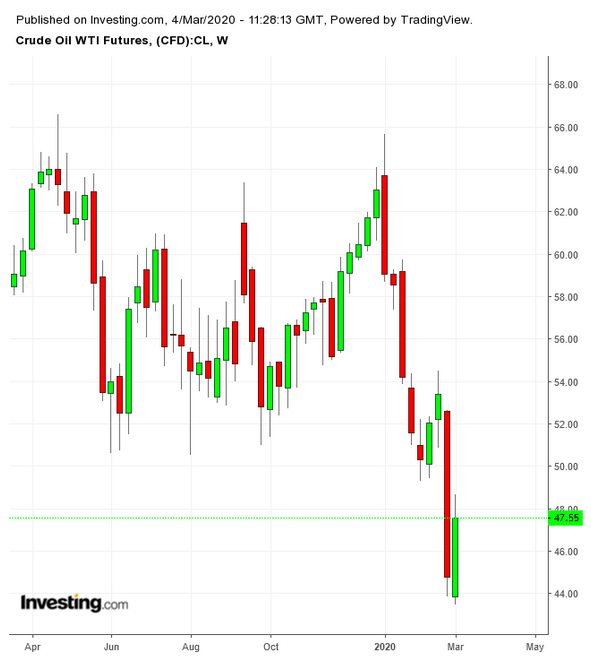 As the nation that stands to gain or lose the most from any OPEC decision — given the huge size of its welfare state — Saudi Arabia is prepared to go as far as necessary to stop the current rut in oil. And Russia, which represents the rest of the oil producing world, is happy to do as little as possible while getting a virtual free ride for standing in solidarity with the kingdom.

Floor Lent To Prices From Cuts Might Not Be Steady

The problem with the upcoming fourth iteration of the so-called OPEC+ production pact — the first agreement was in 2016, the last was in December — is that the floor it lends oil prices this time might not be a steady one.

This is because the crisis oil producers face from the coronavirus has to do with collapse in demand. It’s quite different from the previous sell-offs driven by oil gluts, often blamed on the U.S. fracking boom and its supply of cheap, endless crude.

In theory, when you pump less oil, the crude in storage or circulation gets used up faster, creating tighter supply. But if demand craters faster than what you cut, then you still have a problem.

And if you’re already starting with a large overhang of supply, you have an even bigger problem, because the cuts you make will need time to catch up with the lost demand.

That could be the case with the coronavirus, which has already wiped out some 30% of China’s demand for Saudi oil. The International Energy Agency estimates that year-on-year demand for oil across the world could fall by 435,000 bpd within the first quarter of 2020, the first quarterly contraction in more than a decade.

With more than 3,100 people already killed, and another 90,000 infected globally, there’s no telling how much more of daily activity — as we know it — is going to be disrupted by the virus. And with oil being the commodity that literally moves the world, the consequences of that disruption cannot be understated.

As OPEC+ delegates consider the cuts put before them this week by the Saudis, beyond the health masks that some of them will possibly be wearing, will be the realization that crude prices could fall further even with more supply rationing. After an initial burst higher, the market could retrace to levels that bottom lower than reached so far in 2020, especially if the death toll and infection rate from the virus continue to spike.

Goldman Sachs, in fact, is bracing for such a situation.

“While such global production declines can help normalize inventories later this year, they remain well short of the expected demand loss,” the Wall Street bank said in a note on Tuesday, as it predicted a global surplus forecast of 1.65 million bpd for the first half of 2020.

“Such an outcome would be consistent with all prior large demand shocks, when OPEC+ cuts initially fall short of the actual demand loss,” Goldman added. “This is due to the highly uncertain level of demand contraction.”

Given the likelihood of a higher hit on demand, Goldman said it was revising further downward its forecast for the global crude benchmark , which it expected to trough to $45 per barrel by April, versus an expectation for $53 just two weeks ago. In late afternoon trade in Asia on Wednesday, Brent was at $51.84.

Bank of America is more optimistic than Goldman, forecasting a $54 average for Brent through 2020. While that’s more generous, it puts a floor under the market at best, without a guarantee of higher returns.

“You can tell that the market is still preparing for the worst-case scenario. I know we are!”

“The bigger picture remains a mess though I am hoping that another selloff will provide an opportunity to get long (in) Q3.”