Away From Oil And Gold, Cotton Holds Promise For Buy-In

As this week began, we warned that the macro picture might completely hijack the oil and gold markets, leaving both at the vagaries of U.S.-China talks and rate cut speculation.

Given that these have been recurring themes through 2019, such caution might hardly be news. Yet, our point was to gird yourselves for as little meaningful price action through the week as possible.

Indeed, crude’s and benchmarks barely changed more than a dime either way the first three days, before breaking out on Thursday on reports of an imminent deal from the trade talks, as well as OPEC’s hint that it might cut more supply when it meets in December.

, which saw just a 50 cent change on Monday, finally tanked on Thursday as the Fed remained evasive on its next easing.

Until more is known on all this, we are continuing with this week’s select coverage of commodities with new buy-in opportunities. With the recent focus on sugar, corn and orange juice, we turn today to cotton.

Cotton is one of the most widely grown non-food crops and a stable source of income to the textiles industry. Once a revered raw material, even earning the phrase “Cotton is King” in the 1800s, prices of the fibrous product these days often fare no better than those of , another ubiquitous but struggling industrial commodity.

Yet, cotton may be getting a break hereon if U.S. production of the fiber keeps declining.

The other thing that could work in its favor is a trade deal of some sort between the United States and China—the latter being the world’s biggest cotton consumer.

The World Agricultural Supply and Demand Estimates for cotton, a monthly report released by the U.S. Department of Agriculture on Thursday, showed production down by around 1% to 21.7 million bales this month—largely the result of a reduction in Texas.

That in itself wouldn’t be a major price driver. But combine it with Thursday’s report by the New York Times that there may be a partial U.S.-China deal announced before the end of this week, and you may actually see cotton getting a lifeline.

“Production estimates have been in decline due to weather this season and some suggest it could be worse than anticipated. With increasing concerns on production, cotton prices have been leaning bullish in momentum through this consolidation channel.”

“There has been some recent optimism going into this next round of US/China trade talks with hopes of a partial deal, which could offer additional fuel for rising prices.”

“If upcoming news and reports are bullish, we could see cotton not just break out, but start a more sustained bull run.”

Bullish Calls On The Rise 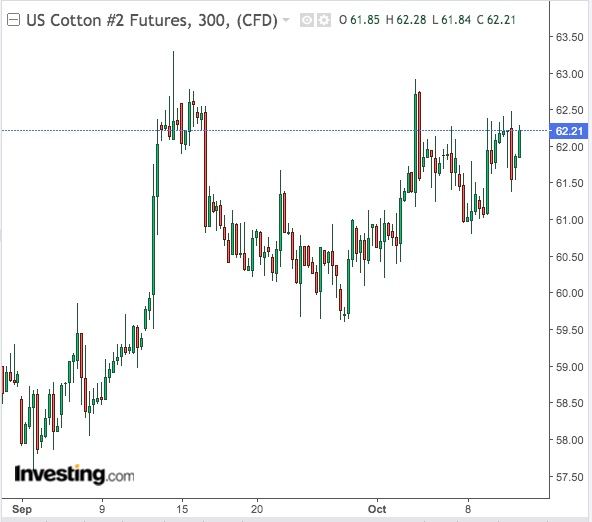 At Thursday’s settlement, ICE’s benchmark December cotton stood at 61.56 cents. While the price action has been virtually flat on the week, month-to-date it was up 1.7% after a gain of 3.2% in September—its first positive month after five straight months of losses.

Mike Seery, a commodities strategist in Plainfield, Illinois, said he has been recommending a bullish position in cotton from around the 61.50 level:

“This trade has been very stubborn. I still believe higher prices are ahead and you can be profitable if you place stop loss at the Aug 26th low of 56.59.”

Seery said he had various bullish calls for cotton based on USDA crop progress reports showing 77% of the bolls—or the rounded seed capsule of cotton plants—having opened in Texas and harvest at 25% complete.

ICE’s December cotton contract is currently trading above the 100-day Daily Moving Average and below the 200-day DMA. Major resistance remains at 62.81.

“For the bullish momentum to continue, prices have to break the Sept 13 high of 63.39. If that situation occurs, the next level of resistance is all the way at the 65 area.”

“I don’t think the low volatility situation in cotton is going to last much longer.”