Aussies Are Coming To Take Out Atlantic Gold

I’ve been talking a lot lately about how I see deal flow rising in the mining space. Miners need more ounces and they sure aren’t getting them from exploration, so they need to buy them. And large miners are getting significantly higher valuations than small operators, which means the same mine is worth more within a larger company. That is exactly the impetus that drives merger and acquisition cycles.

We’ve already seen some mega mergers and a good number of mid-sized deals. And the deal list got longer this week with news that Australian miner St. Barbara is buying Atlantic Gold Co (TSXV:) for $800 million.

The deal lets me toot my own horn for two reasons.

First, I invested in Atlantic and added it to the Maven Letter portfolio in the fall of 2016. I had just visited the under-construction Moose River mine in Nova Scotia and came away very impressed with the team, the asset, the approach and the upside. 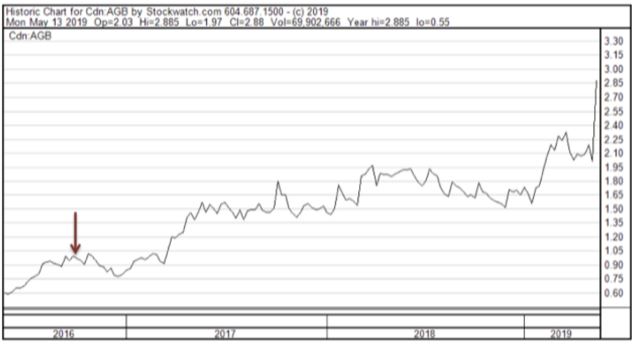 The takeout price means a 330% gain in 2.5 years for those who invested alongside. This is the advantage of identifying opportunities early. And key in identifying this opportunity was seeing that the people were the story.

Steven Dean had the knowledge, backing and guts to start this company in the depths of a bear market. He worked with geologists to prove that an area known only for high-grade gold also hosted disseminated mineralization. He hired very strong people to his team, including Maryse Belanger who did an incredible job leading the build and operation of the Moose River mine. As a group they focused on managing risk, a focus that stood out in our high-risk business, by doing things like negotiating a fixed price build contract and drilling out reserves on extremely tight spacing to pre-plan where every tonne of material was going.

The best teams lead the best deals. The fact that Atlantic not only attracted a takeout offer but an all-cash deal in a tight mining market is proof.

The second reason I get to toot my own horn is that I’ve been banging on for the last month about how we’re going to see more deals in mining. And I specifically said the next wave of deals would focus on single-mine operators. Voila: Atlantic gets bought.

I am proud to have identified Atlantic early in the game. I plan to hold my shares through the deal close, so that I get both the cash payout and shares in the spinco, which to start will hold Atlantic’s only other asset, a 40% stake in Velocity Minerals Ltd (TSXV:). Steven and his team are sticking together and I think everyone should want a piece of what they do next.