As Price Rut In Natural Gas Hits A Pause, Bears Mull Next Move

There’s a saying in markets that the cure for low prices is low prices. That’s probably what’s happening with natural gas now, which is finding some relief after plumbing near four-year lows — despite the weather remaining unsupportive for the heating solution.

As regular trading on the New York Mercantile Exchange’s Henry Hub came to a close on Wednesday, the showed a third day of gains out of four that — if retained — could result in the first week of gains since the opening week of January.

What seemed peculiar was that it was also the week when the front month fell all the way to a March 2016 low of $1.804 per million metric British thermal units as weather models suggested that the cold in the coming weeks will not match the winter peak of the past four years.

Market Up In Feb, After Disastrous 3 Months

Since the start of February, natural gas is up 2.4%, compared to its disastrous streak over the past three months when it fell 16% in January, 4% in December and 13% in November. 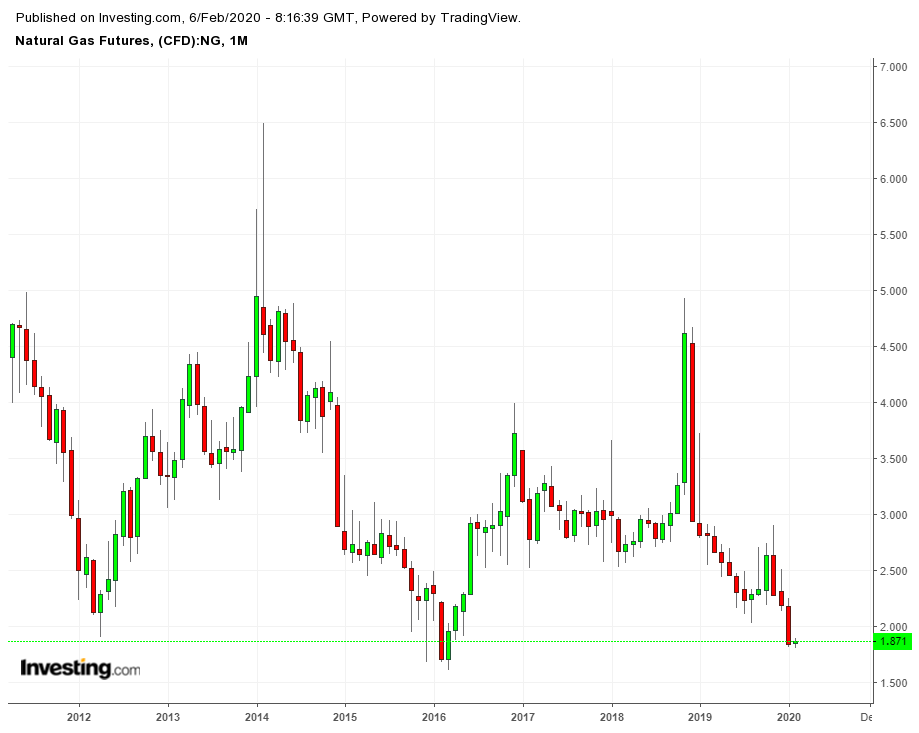 The rebound comes ahead of Thursday’s weekly natural gas due from the U.S. Energy Information Administration at 10:30 AM ET (15:30 GMT).

Analysts expect the EIA to say that U.S. utilities drew 129 billion cubic feet of gas from storage during the week ended Jan. 31, down significantly from the previous week’s 201 bcf draw.

Beyond the previous week’s comparison, what’s reported by the EIA is also expected to be lower than the 228 bcf draw recorded during the same week a year ago and a five-year (2015-2019) average withdrawal of 143 bcf for the period.

If those estimates are on target, total gas in storage would drop to 2.617 trillion cubic feet (tcf), but remain nearly 31.2% above the same week a year ago.

Last week’s reduced pull from storage came amid higher temperatures that reduced the need for heating in homes and businesses. There have been 164 heating degree days (HDDs) compared with a 30-year average of 197 HDDs for the period, data showed.

HDDs measure the number of degrees a day’s average temperature is below 65 degrees Fahrenheit (18 Celsius) and are used to estimate demand to heat homes and businesses.

In the face of such data, that the market can find price support at all seems surreal to people like Scott Shelton, ICAP’s energy futures broker in Durham, North Carolina.

“To be sure, there’s not a lot of good news for NG, though the rest of the energy markets are recovering from the weakness generated by demand fears,” Shelton said, referring obviously to Wednesday’s rebound in from the bear market it was plunged into a day earlier on coronavirus fears.

But The Price Action Is Better Than Thought

Shelton goes on to add that the market was possibly “overleveraged short in the front end” and, as a result, could see a “contra-common sense rally in spreads.”

Andy Weisman of EBW Analytics has a similar view.

“With natural gas futures already at historic mid-winter lows, the rate at which prices eroded slowed last week — declining only modestly, despite another sizable week-over-week loss in projected demand,” Weisman said in a note.

“A near-term bottom could form for natural gas, with prices trying to push higher,” added Weisman.

With Some Cold Pockets On The Way, Caution May Be Best

What does this mean for the gas investor?

It means being more cautious moving forward as this may not necessarily be a one-way trade for gas yet, said Dominick Chirichella, director of risk and trading at New York’s Energy Management Institute.

Chirichella said there were still pockets of chill that gas bears have to contend with in the coming weeks, and that could keep the market bobbing at around the key $1.80 support.

“Temperatures look to be below-normal to well-below-normal across the West and North Central U.S. for days 11-15,” Chirichella said. “The coldest temperatures overall should be in the northern Plains and interior Northwest.”

While above-normal temperatures will occur across the Southeast, “there will still be a dividing line between these two air masses from Texas through New England,” he said. “Temperatures will shift warmer or colder depending on where this boundary goes.”