It took its peers on the precious side to help out, but could finally be on its way to shattering the $3 a lb ceiling that has remained untouched for over two years.

As and racked up milestones through July, copper came into its own, reaching its highest since June 2018 at $2.99, making even non-believers sit up and take notice of a commodity that had been languishing well before the coronavirus pandemic hit the world.

July’s show-stopping rally has made silver the unlikely king of commodities with a remarkable 35% gain so far this month that has trounced even gold’s 8% rally. Copper too hasn’t done badly, gaining a net 30% in four straight months of price increases, versus gold’s cumulative 25% rise over five months. 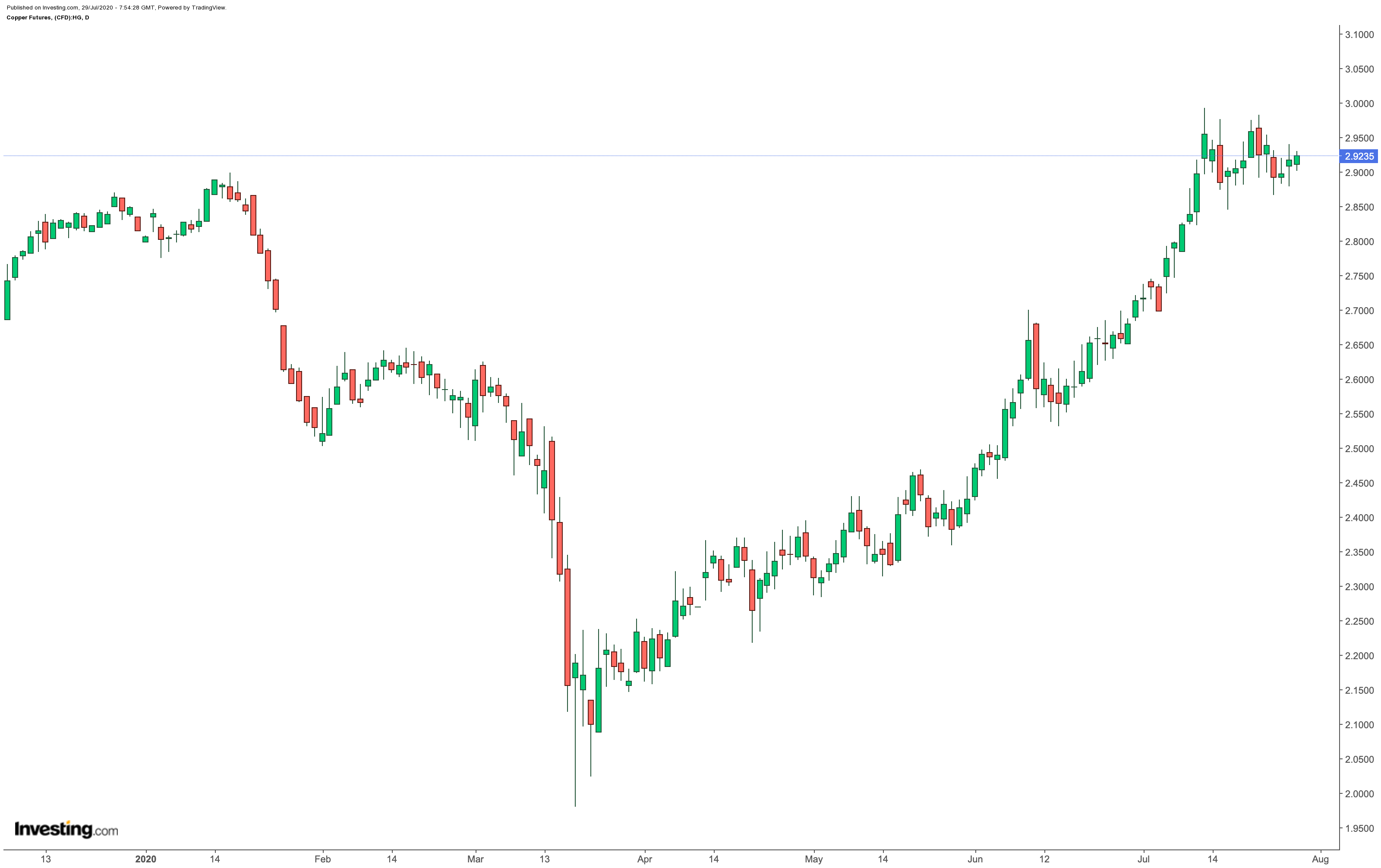 And there’s still that $3 barrier that copper has not yet taken out.

This is especially so if the continues its vertiginous slide beyond its current two-year lows, as the United States adds another $1 trillion to its fight against the economic impacts of COVID-19 in the form of monetary and fiscal stimulus, thereby debasing the greenback and boosting commodity prices as a whole.

“A recovery in Chinese demand, combined with supply disruptions at mines in South America were the triggers that finally forced speculators back into long positions following the break above $2.50/lb.”

The risk of a second wave of COVID-19—especially in the United States and China, the world’s two biggest consumers—“may force a rethink and we see no further upside during the coming quarter,” Hansen added.

Theoretically, copper prices reflect the health of the global economy. For years, analysts had watched the metal in the belief that it can indicate economic boom by rallying in anticipation, or economic bust, by declining—a theory that has been debunked over the last couple of years, as this relationship between the two has broken down.

That failed dynamic is probably why some trading houses like TD Securities continue making bearish calls on copper, despite the recent price performance.

“Copper has recently benefited from cascading factors, ranging from a V-shaped recovery in commodity demand to supply side disruptions and a large-scale CTA buying program which took prices to $6,600/t,” TD Securities said in a mid-July note shared with Investing.com that referred to on the London Metal Exchange.

“As the pace of demand growth normalizes, amid economic and seasonal drivers, and disrupted supply returns to the market, the red metal could be set to revert lower. Indeed, a catalyst such as economic data disappointments with renewed COVID infection worries could send prices toward $5,400/t.”

Some Call For Tactical Shorts On Copper

That, TD Securities said, was what pushed it to take a “tactical short position in copper,” pinning its expectations for lower prices on the fundamentals that include supply, demand, inventories and cost structure.

Analysts at Citi joined the chorus of gloom, saying it could be overvalued going into the third quarter:

“The copper rally … has occurred against a backdrop of flat, to falling, equity prices and bond yields, leaving copper looking overvalued … by $220 to $420 per ton, based on these historical relationships.”

“Overall, we stick with our very near-term point price target of $5,750 a ton (versus spot of $6,050 a ton) though we see a window for a pullback as the 2 to 4 weeks, and ultimately we recommend buying on dips.”

Others Say This Metal Is in A Different Era Now

Despite such concerns over the near-term outlook, some say that, in the longer run, the picture is more positive.

Eleni Joannides, principal analyst in Wood Mackenzie’s copper team told a CNBC poll that she was forecasting stronger demand for copper in the second half of this year, as economies and industries restarted.

However, she noted that question marks remained around the degree to which the economy would bounce back before the end of 2020.

“There’s a whole slew of the population out there that is either furloughed, is losing their job or doesn’t know what’s going to happen to their job, so the risk is that they’re not going to be going out into the market buying some of the big-ticket items that contain copper,” she explained. “So there’s a concern that whilst demand should, in theory, pick up, it may not pick up to the degree that we expect, because people aren’t going to go out there and buy a new car or a new washing machine.”

While Wood Mackenzie’s outlook for copper demand was upbeat, the group’s analysts did not expect a dramatic rally in prices, Joannides said.

“We have a positive outlook and expect quite solid demand growth over the next few years.”

“But while the picture is looking positive for demand, it’s looking even stronger on the supply side. So when we look at the balance between supply and demand, we’re still looking at a surplus market for the next couple of years, and that will put some downward pressure on prices.”

Jonathan Barnes, senior copper analyst at Roskill, told the same poll that copper prices would be influenced by continued pressure on supply in the coming quarters. He said it was “almost inevitable” that copper markets would see more disruption to production this year.

Noting that mining giants BHP Billiton (NYSE:) and Chilean state-owned Codelco had already warned production at their sites would be slowed by the pandemic, Barnes said supply issues were generally a feature of the copper market due to unforeseen problems that impact primary production. But this year, he said, “it looks as though it’s going to be much more substantial.”

The impact of the pandemic on production of newly-mined material was “just grazing the surface,” Barnes added. Secondary copper, particularly copper scrap—which makes up one third of overall supply—had been hit even harder by the crisis, he said, estimating that global trade in copper scrap had fallen by around 30% in the first half of 2020.

China, which makes up around half of global demand for copper, has boosted imports of copper cathode to make up for a shortage of scrap metal.

“Chinese demand looks like it’s going to continue to increase and stay strong for the second half of the year.”

“And while demand in the rest of the world is quite weak, you would hope that eventually—it might take until the fourth quarter—you’d see some stabilization and signs of recovery.”

While investors may be tempted to assume “it’s just going to be a one-way bet going up from here,” copper price rises could be limited if scrap supply bounces back and Beijing eventually allows some scrap to be imported, Barnes added.

Disclaimer: Barani Krishnan does not own, or hold any positions in, any of the assets he writes about.