As Markets Await Powell, Gold Bugs Want To Know: Is $1500/Oz Still On?

It’s the classic antidote for the gold investor: Just when you think there’s no stopping the yellow metal’s rise, suddenly the rally comes undone and it may be time to dump instead of pump. 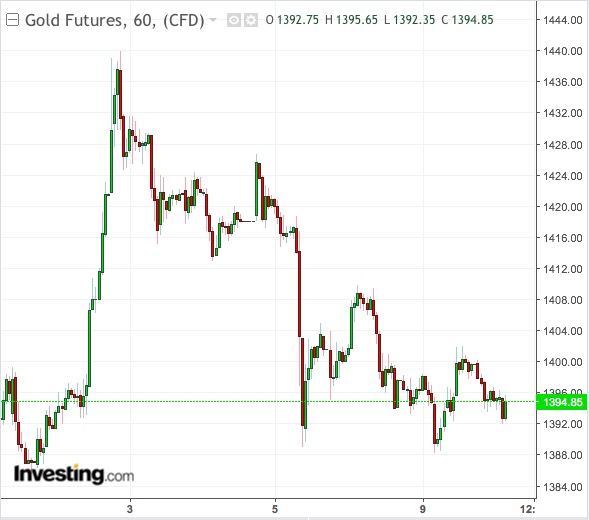 While returning to $1,400 might not be the problem here, what remains an enigma is whether $1,500 pricing and beyond—the gold bug’s sweet spot—is attainable.

That will depend primarily on what the Fed says about rates, beginning with Chairman Jerome Powell’s to Congress beginning today.

Yet, some market participants have scaled back expectations for this after a 224,000-strong in June signaled the economy may be too strong for an easing. The forecast jobs expansion for last month was only 160,000.

Powell’s testimony is expected to be perused word-for-word by gold traders looking for clues on how the Fed chief will be voting at this month’s Federal Open Market Committee meeting.

Aside from Powell’s address to Congress, the other major driver for gold on Wednesday will be the FOMC’s release of its June . This will spell out more clearly what prompted the committee’s members to vote the way they did when they decided to hold rates last month.

In June, the FOMC removed the word “patient” from the statement it typically issues after its monthly meetings, signaling to investors that instead of being reactive to incoming data, it might take proactive action to keep the U.S. economy’s record expansion of nearly a decade on track.

Powell also said in a recent speech that “an ounce of prevention is worth more than a pound of cure”, a hint that the central bank might lean toward a so-called insurance cut to head off a potential economic slowdown.

Yet, if history is a guide, then the Fed has always been known to err on the side of caution—meaning it might withhold the minimum 25 basis points cut the market expects in July, just to see how U.S. jobs perform this month. While some gold traders have lofty expectations for a 50 basis points reduction, few are holding their breath on that.

“Powell could either reinforce market expectations for a rate cut or rein them in.”

“The level of certainty that the Fed will cut rates in July is far from justified, so I’d be looking for Powell to push back against the dovish message that markets have priced in.”

Of these, the most closely watched would be Bullard, who was the only dissenting voice at the June Fed meeting, when the central bank decided to hold rates. Overall, the St. Louis Fed president is one of the more dovish members of the FOMC.

Bank of America Merrill Lynch (NYSE:) said it was bullish on $1,500 and above gold, but wary about near-term risks associated with precious metals.

“The Fed turning more dovish at the same time as global macroeconomic headwinds have intensified should push the yellow metal to $1,500/oz in the next twelve months. However, we are somewhat concerned about the speed with which the market has re-assessed the likelihood of rate cuts by the US central bank.”

Precious metas strategists at UBS concur on this, saying:

“A few years and several false starts later, we think the macro backdrop has now started moving more convincingly in gold’s favor … though the route for gold is unlikely to be a straight path higher.”