As Commodities Soar, Consider Buying PICK ETF On The Dip

Base or nonferrous metals are the building blocks for infrastructure. , , , , , and trade on the London Metals Exchange.

China is the world’s leading consumer, given its never-ending appetite for the metals that are construction essentials. In 2013, China purchased the London Metals Exchange in a process that pitted a Beijing-controlled Hong Kong exchange and clearing company against the other leading exchanges, the Chicago Mercantile Exchange (CME) and the International Exchange. China was a natural fit for the LME as it has been the exchange’s most influential customer for decades.

The MSCI Global Metals & Mining Producers ETF (NYSE:) holds shares in all of these top metals and mining companies.

The prospects for the metals remain bullish as the demand is likely to rise because of decarbonization. Buying PICK on the dip could be the optimal approach for the coming months and years.

Copper, lead, and nickel have corrected since the 2021 highs

Copper is the leader of the base metals sector. The red metal is also a bellwether raw material for the commodities asset class. Copper took off on the upside after reaching a bottom in March 2020, when the price fell to the lowest level since early 2016 at $2.0595 per pound.

As the weekly chart highlights, on COMEX made higher lows and higher highs for 14 months. The nonferrous metal reached an all-time high at $4.8985 per pound in May 2021. LME copper forwards traded above $10,700 per ton at the May peak. Copper corrected lower from the high, trading at $4.37 per pound on Oct.11. 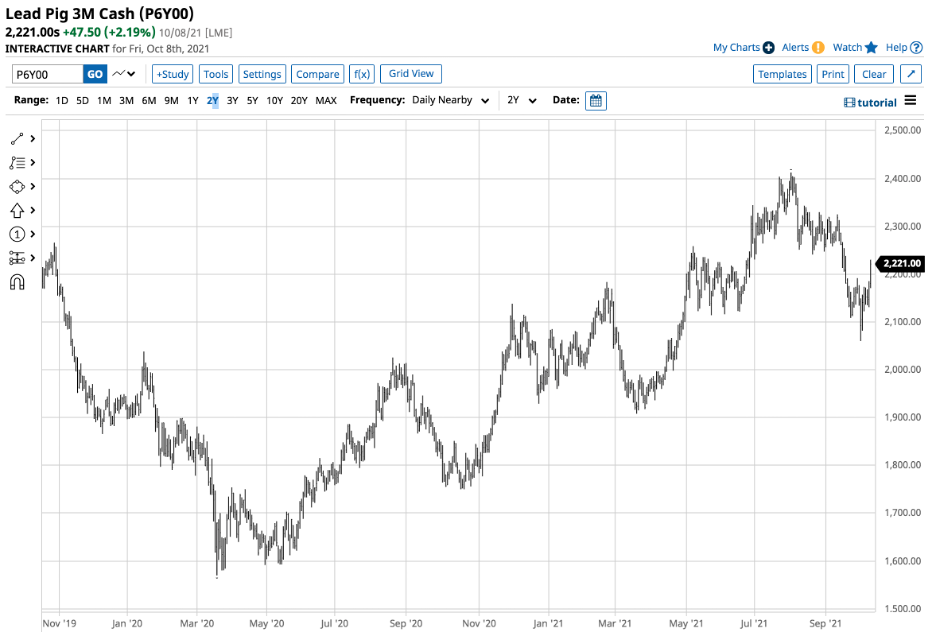 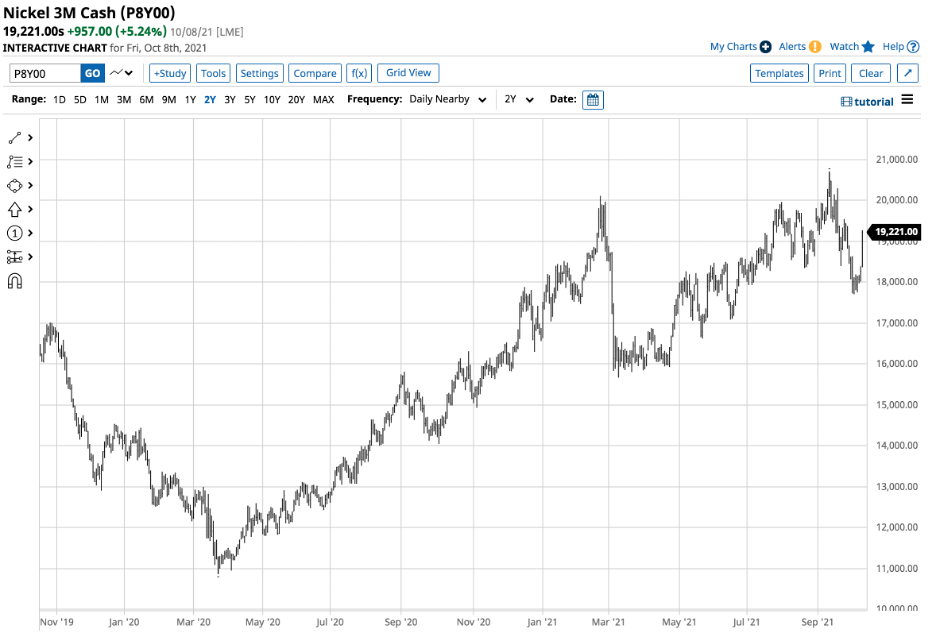 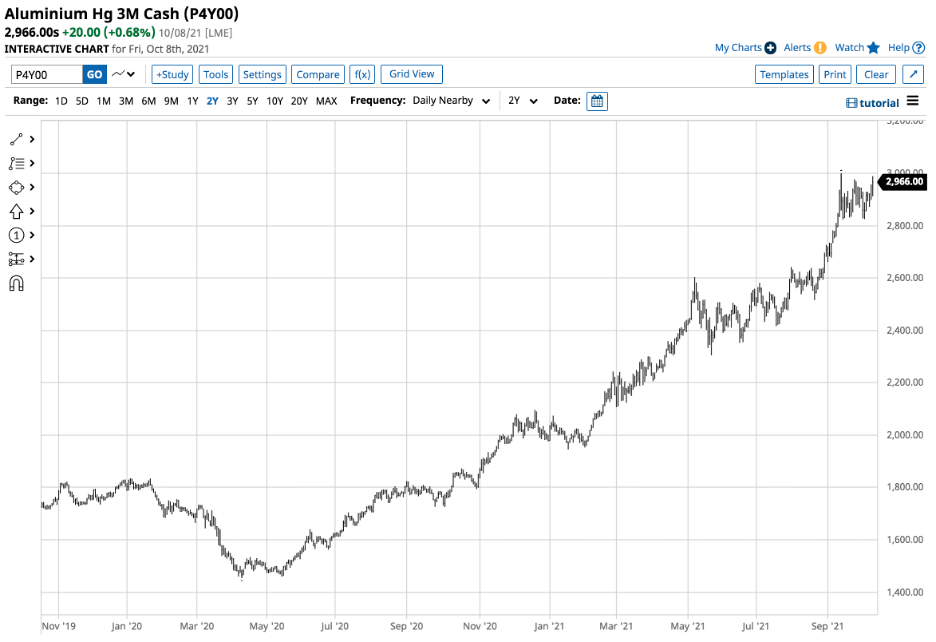 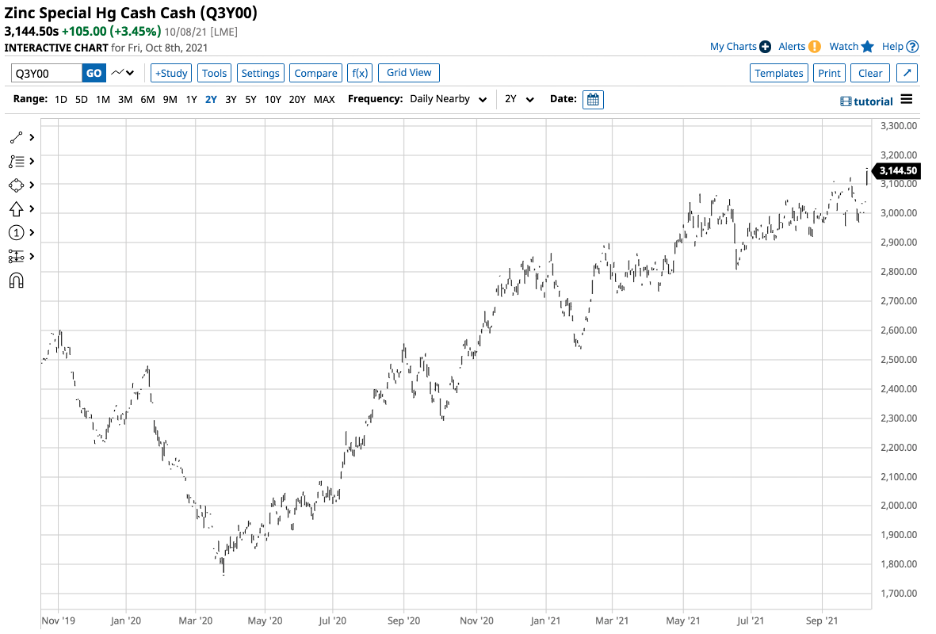 Tin is the most illiquid LME metal and has been the only metal aside from copper to reach a record high over the past weeks and months. 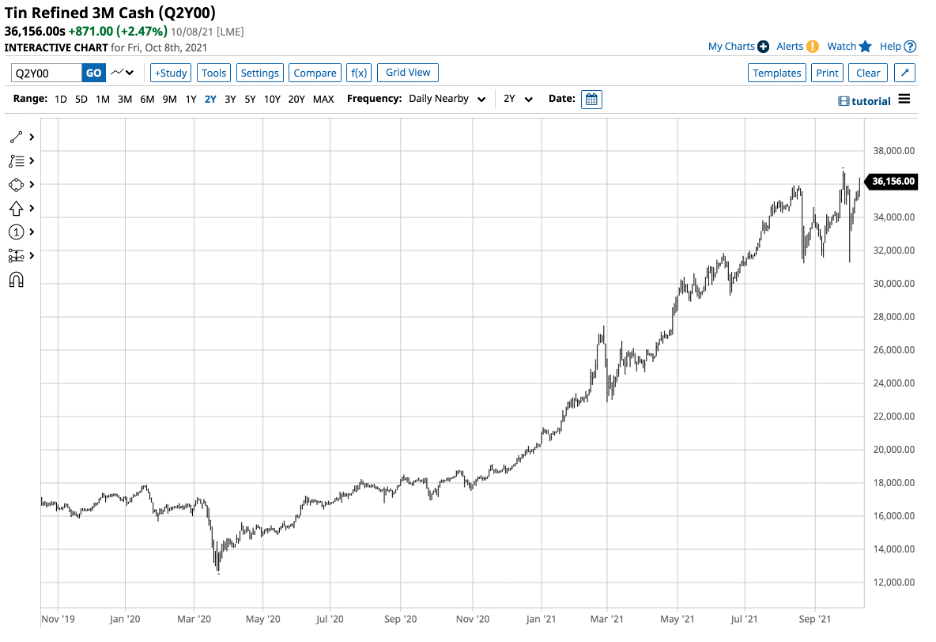 The base metals rally continued to keep prices near multi-year or all-time highs even though China has tried to cool the rally with substantial selling from July through September.

China has attempted to cap the rallies

China held three auctions to sell the most liquid base metals from July through September, selling hundreds of thousands of tons of copper, aluminum, and zinc.

In early October, the Chinese sold another 30,000 tons of copper, 50,000 tons of zinc, and 70,000 tons of aluminum from its strategic stockpiles. The fourth auction may not be the last as China continues to attempt to cool the price appreciation via sales of 570,000 tons of the three metals since early July.

Prices have held up well in the face of China’s sales. In Q3, LME copper was only 4.83% lower, while zinc’s price posted a 2.59% gain. Aluminum soared by 13.06% in the third quarter despite the sales. In the early days of Q4, all three metals have moved to higher ground.

Bull markets do not move in straight lines. Corrections can be swift and brutal. We watched as COMEX copper futures fell from $4.8985 in mid-May to a low of $3.9615 per pound in mid-August, an over 19% decline in three months. At the $4.37 level on Oct.11, copper futures were approaching the midpoint of the move from the record high to the August low. Imagine where copper, aluminum, and zinc prices might be if China had not sold from strategic stocks.

The trend is always your best friend in markets. The medium to long-term trends in base metals remains higher despite copper’s pullback. Zinc and aluminum prices remain at or near the highs, while nickel, lead, and tin prices are all trading in bullish patterns. The companies that extract the metals from the earth’s crust stand to profit handsomely at current price levels. Higher prices would only enhance their earnings over the coming months and years.

The most recent top holdings of the MSCI Global Metals & Mining Producers ETF product (PICK) include an over 39% exposure to BHP, RIO, FCX, Anglo-American, and NUE, the heavyweights of the metals mining industry.

PICK had just over $1 billion in assets under management at $42.60 per share. The ETF trades an average of just below 300,000 shares each day and charges a 0.39% management fee. 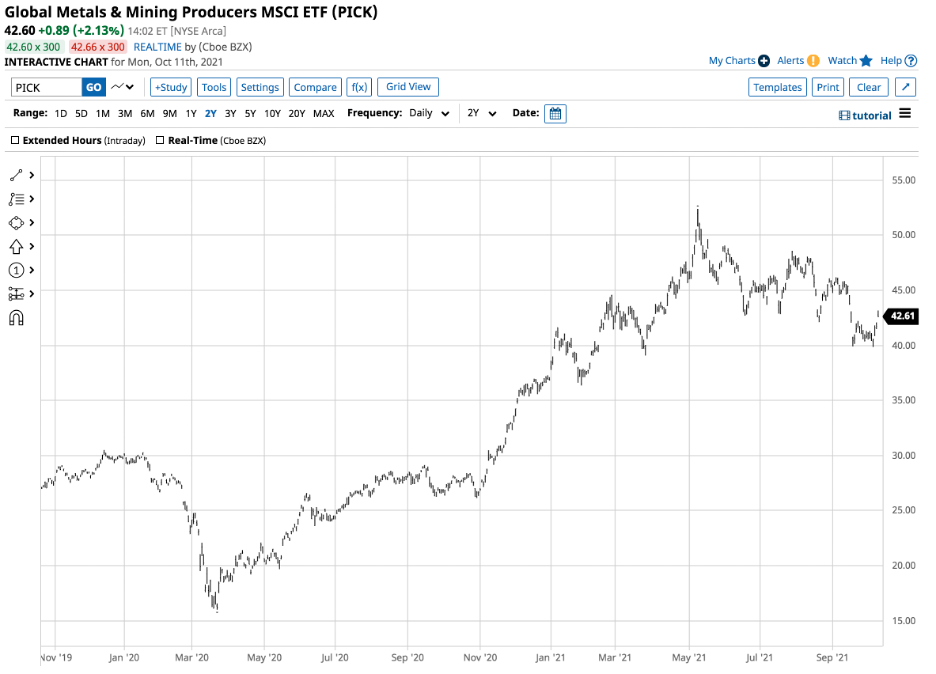 PICK rose from a low of $16.01 per share in March 2020 to a high of $52.39 on May 10, 2021, when copper reached its record high. Mining shares provide leveraged exposure to the commodities they extract from the earth’s crust as they tend to outperform on the upside and underperform during price corrections. PICK moved over 3.25 times higher during the rally and corrected by 18.7% since the May high at $42.60 per share on Oct. 11.

PICK is an ETF that provides diversified and leveraged exposure to the metals mining industry and could be an excellent product for those looking to participate in the bull market in nonferrous metals over the coming months and years. Rising inflationary pressures, higher energy prices, and infrastructure rebuilding all support base metals prices. Moreover, the price action in the face of Chinese sales signifies that the attempt to cool the rallies may only be holding prices steady as demand continues to rise.

Worldwide decarbonization will require more metals, while the initiatives will also weigh on output, perpetuating a continuation of the almost perfect bullish storm in the metals sector.