Doctor copper is much more than a nonferrous metal that trades on the CME’s COMEX division in the futures market and the London Metals Exchange in the forwards market. ’s price traditionally moved higher during periods of economic expansion and lower during contraction. Copper earned its title as the commodity with a Ph.D. in economics because the metal has been a barometer of the global economy’s health and wellbeing.

But in 2021, copper has taken on another role. As the price was on its way to a record high in May, Goldman Sachs (NYSE:) called copper “the new oil,” saying that decarbonization is impossible without the base metal. Copper is now a critical commodity for the evolution of the green revolution to address climate change.

Record high in May

Nearby COMEX fell to a low of $2.0595 during the height of the risk-off period as COVID-19 spread worldwide. The price moved from a four-year low to a record high over the course of the next fourteen months.

Probing briefly below $4 per pound

No matter how aggressive, bull markets rarely move in straight lines, but the appreciation in copper was more than impressive. As copper rose, Goldman Sachs’s analysts called the red metal “the new oil,” citing increasing requirements for the red metal as the world addresses climate change with alternative energies. Goldman forecast a $15,000 per ton copper price in 2025, putting nearby COMEX futures at over the $6.80 per pound level.

The chart shows the decline that took the continuous futures contract to a low of $3.9615 on Aug. 19, which turned out to be just a one-day wonder as copper only probed below $4 on that day and has not returned to test the low.

Blastoff towards the high, only to fail

Since the mid-August low, copper futures have made a series of higher lows as the price consolidated under the $4.4715 per pound level on the December COMEX futures contract.

The daily chart of the active month December contract illustrates that copper consolidated in a trading range below $4.48 and above $4.00 from late August through mid-October. The price exploded higher on Oct. 13 and reached a high of $4.8230 on Oct. 18 before retreating and trading just below the $4.40 level on Oct. 27. Copper has made higher lows since August, but the latest attempt to test the May high failed at a lower high, a sign of continuing price consolidation.

At $4.40 per pound, the long-term picture for copper remains bullish. Four reasons lead me to agree with Goldman Sachs and other analysts projecting higher highs in copper over the coming months and years.

Bull market corrections can be brutal. Copper dropped by over 19% from its May record high. At the $4.40 level on Oct. 27, copper was trading just below the midpoint of the price range since May as the red metal consolidated and digests its recent high.

Meanwhile, China, the world’s leading copper consumer, has attempted to cool the rally in copper and the other base metals. Since July, the Chinese have sold 570,000 metric tons of copper, , and in four separate auctions.

While the sales may have put a temporary cap on prices, aluminum and zinc forwards have risen to new highs despite the selling, and copper rallied in October after the fourth auction earlier this month. Chinese strategic sales may have cooled off the rallies, but they have not sent the prices all that much lower. Moreover, the world’s leading consumer will need to buy the metals over the coming years for construction projects and to replace their stocks.

As the world embraces alternative energy, it creates an almost perfect bullish storm for the copper market.

The most direct route for a risk position in copper is via the forwards on the London Metals Exchange for the futures on the CME’s COMEX division. But for those looking to participate in the copper market without venturing into the volatile forward or future arenas, the United States Copper Index Fund, LP (CPER) provides an alternative. 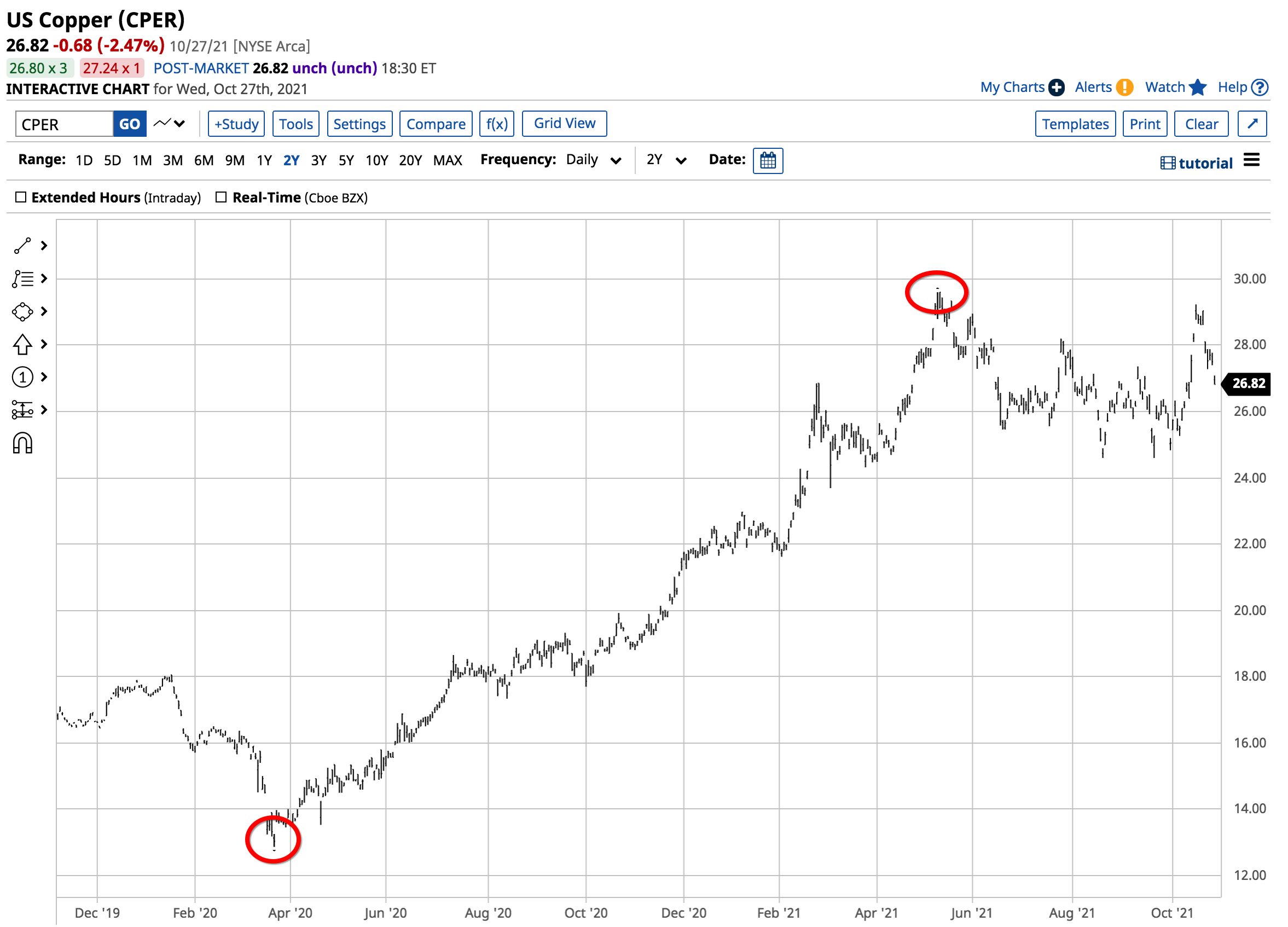 Copper could be resting at the $4.40 level. While the base metal made a lower high, it has been making higher lows, a sign of bullish interest. Buying copper on price weakness could be the optimal approach for the coming years.