If you were an investor fixated on gold or copper this week and witnessing returns in the red or just flat, there’s another metal you may want to check out.

Aluminum has made a pile for investors who were right to bet on resurgent Chinese demand for the metal, after the coronavirus lockdowns in the first half of the year.

And despite its recent rally, aluminum’s technicals suggest it may still have some upside to offer. 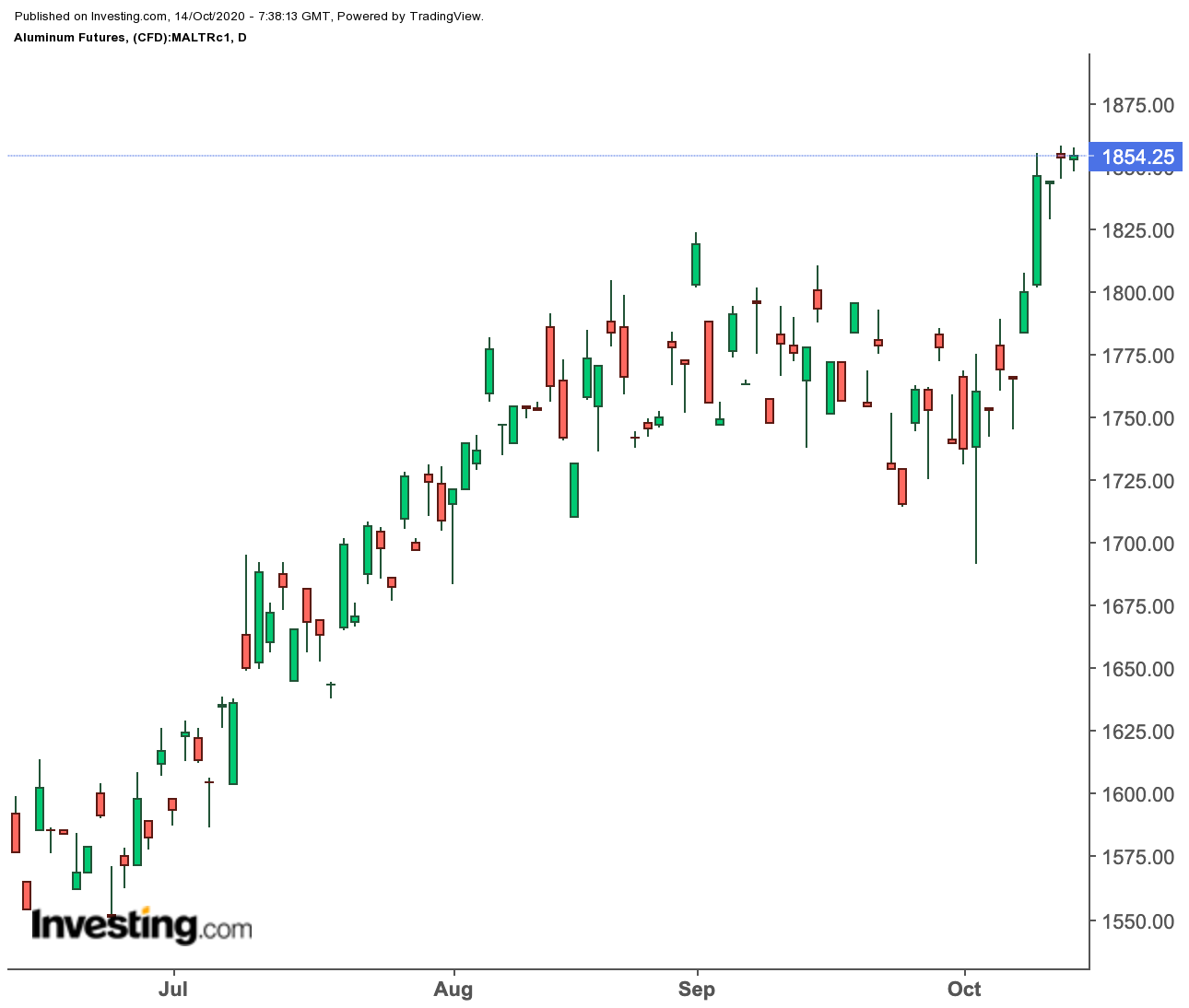 Only One Month In The Red Since April

Also, except for September’s 1% decline, aluminium has been up the last six months.

For October thus far, it is up almost 6%, heading for its best month since July. While aluminum had a woeful first half of the year, due to the hit taken by metals in the early stages of the coronavirus outbreak, year-to-date it isn’t doing too badly, posting a 3.5% premium.

From a technical perspective, Investing.com’s Daily Outlook has a “Strong Buy” call on three-month aluminum, with a peak upside of just under $1,873 a tonne.

Compared with aluminum, gold still has an outsize annual gain of more than 20%. But this week alone, futures of the yellow metal are down almost 2%, falling beneath key $1,900 support. For October, gold is just scraping into positive territory.

So, other than technicals, what’s giving aluminum its wind?

Expectations of Chinese demand, that’s what.

Chinese aluminum smelters have been quickly restoring primary aluminum capacity, which was closed earlier this year, and also putting new projects into operation to take advantage of high profit margins.

According to S&P Global Platts’ China Alumina & Aluminum Outlook for Q4 2020, a huge 86% of market participants it canvassed expect alumina demand to increase in Q4 as China’s industrial activity strengthens. Only 4% of the survey’s respondents expect  a slide in alumina demand.

Stronger demand is likely to present an opportunity for imported alumina, with 48% saying imports would increase and only 9% thinking it would decrease.

And despite the rally now, price forecasts for aluminum were, interestingly,  mixed in the survey, with 38% expecting them to increase and 29% believing they would fall.

Since the survey and its outcome was largely China-centric, S&P Global Platts published price expectations from the respondents in the yuan. Alumina prices in Q4 were largely expected to be in the 2,300-2,400/mt ($337-$352/mt) range, supported by solid demand and production costs, the survey said

Given this scenario, 71% of respondents estimated that the rising primary aluminum capacity would start to weigh on Chinese domestic prices.

Around 52% said the import arbitrage opportunity would remain open in Q4, while 19% thought it would close. Some noted the gap would start to narrow in view of rising domestic supply and a recovery in the seaborne market.

Platts spoke to 22 companies for its outlook, with the participants made up of producers, aluminum smelters, and domestic and international trading houses.