Last week OPEC delivered what is being called the “Saudi surprise” to oil markets—just in time for the holidays. After two days filled with contentious , OPEC and its non-OPEC partners agreed to reduce their collective oil production quotas by 500,000 bpd for the first quarter of 2020. 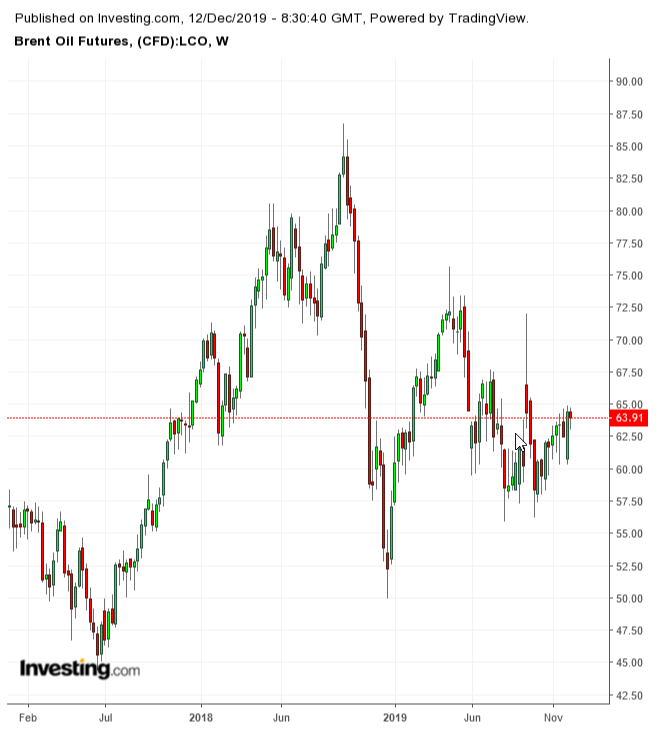 On paper, these cuts look consequential. But the more significant questions are whether supply adjustments from OPEC and OPEC+ can have any real impact on the market and whether producers will comply in meaningful ways. Here’s what to watch:

Russian compliance is a major concern. The terms of this deal call for Russia to cut an additional 70,000 bpd, making its quota 10.328 million bpd, according to the country’s oil minister Alexander Novak. This number now excludes Russian condensates, which had previously been included in its production numbers.

Russia’s November oil output was 11.244 million bpd, though apparently 800,000 bpd of this is considered condensate and will thus be excluded from its quota. Still, because the country has been overproducing by so much, it would need to cut 116,000 bpd in Q1 of 2020 in order to comply with its promises to OPEC in Q1.

According to Lukoil’s (OTC:) vice president, his company has yet to be briefed on these new production limits. It is considered very difficult for Russia to slow production in the winter months, because making changes to production in Siberia can be dangerous in such cold weather.

Thus, it seems unlikely that the world’s third largest oil producer will actually produce fewer barrels. Instead the “cuts” will likely show up on paper only, through the sudden exclusion of condensate. Traders should keep this in mind when the numbers Russia reports to OPEC seem to suddenly take a dip while tanker and pipeline transportation continues as before.

Saudi Arabia initially threatened to increase its own production and flood the market in order to scare cheaters into compliance. This strategy apparently did not go over well, so, instead, Saudi Arabia pledged to make additional, voluntary cuts as an incentive to OPEC and OPEC+ producers to comply with the cuts requested of them.

Saudi Arabia’s production quota will decrease to 10.145 million bpd. The kingdom is actually currently producing below its quota, at about 9.9 million bpd, but oil minister Prince Abdulaziz bin Salman pledged to cut Saudi production to 9.744 million bpd as an incentive for other countries to comply.

Saudi Arabia can easily adhere to these promises, or just as easily increase production to punish other countries that overproduce. Nevertheless, it’s unlikely that there is anyone in the current Saudi leadership with the fortitude to unleash the taps to punish other OPEC members.

Iraq blamed some of its non-compliance on its relationship with the Kurdistan Regional Government and the agreement with the KRG concerning oil production. The Iraqi oil minister said that the KRG had been producing and marketing more oil than it should have been. But he said that as of now, the marketing arm of the Baghdad government, SOMO, will be controlling Iraqi output.

This explanation was not especially convincing. Indeed, most market watchers will want to see the results of secondary source tracking before they put any faith in Iraqi promises.

Following last week’s OPEC decision, Goldman Sachs raised its outlook for oil prices in 2020 to $63 per barrel for Brent. This is an increase of $3 per barrel and reflects an assumption that OPEC and OPEC+ will fully comply with their new promises.

Keep in mind that Goldman Sachs, like all other banks, regularly adjust their market outlooks in order for their forecasts to appear in line with what is actually happening with the market. In fact, OPEC’s own analysis emphasized the need for strict compliance just to keep oil prices from sliding, especially during the first quarter of 2020, which is a time of seasonally weak demand.

OPEC may succeed in cutting its own production, even if Saudi Arabia is the main contributor to these cuts, but that will not stop production from growing in the rest of the world. Production from the U.S., Brazil and Norway is expected to increase in 2020. There is still a great deal of uncertainty about whether and when U.S. shale production will top out and start to decline.

Weak demand, fueled by the U.S.-China trade dispute and fears of a global economic recession will also play a major role in setting oil prices in the first half of 2020. In fact, economic indicators of demand are likely to play a larger role than supply in determining oil prices in 2020.

Even though OPEC and Russia were able to unite and agree on a 500,000 bpd reduction in supply for the first three months of 2020, the effect this will have on prices remains questionable. Even OPEC and OPEC+ cannot combat months of dismal economic sentiment and growing production from other sources.

US reaches a phase one trade deal ...