The saying is: “If you expect nothing, you can never be disappointed.”

Gold longs were more than a smidgen disappointed after the European Central Bank left unchanged on Thursday.

Market odds for a prompt ECB cut were never too high anyway, surpassing just 50% last week, and the rate reduction, if any, would have been 10 basis points. Therefore, expectations for immediate monetary easing in the euro zone were fairly low. Yet, the ECB rates decision was being watched closely across the world as the precursor for another action: A

The hesitance of Mario Draghi and his governing council to act now rather than later has undoubtedly caused some unease for gold bulls.

The ECB action doesn’t necessarily change the overwhelming expectation for the first U.S. rate cut in a decade when the Federal Open Market Committee meets on July 30-31.

But more important than what happens next Wednesday is what the market is expecting of the Fed in follow-through action in September and beyond. Here’s where the real disappointment could be, not just for gold traders but also the equities crowd which chased the and to record highs on Wednesday, just ahead of the ECB decision. 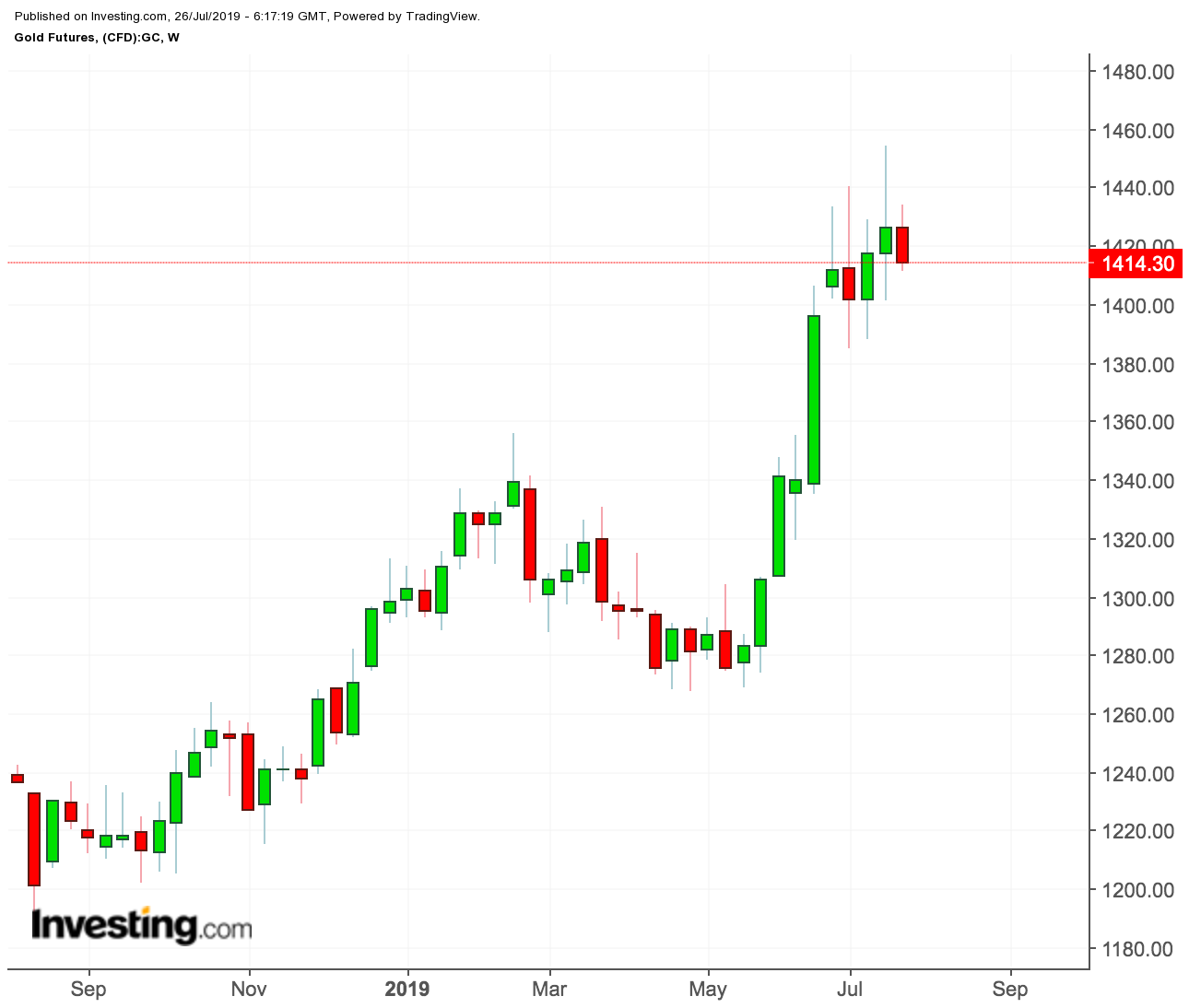 Are Investors Expecting A Too Dovish Fed?

Blackstone’s chief investment strategist Joseph Zidle is among those who believe the market is expecting too much of the Fed in terms of dovish action.

Zidle laid out his thoughts in an interview with CNBC on Tuesday:

In short, Zidle thinks the Fed won’t deliver on the multiple interest rate cuts expected in the coming months. And the disappointment could cause stocks to tank from all-time highs.

As of now, the fed funds futures market expects a 58% chance for a 50-basis points cut at the September FOMC meeting.

Zidle, like many others, expects the Fed to announce 25-bp cut next Wednesday as “insurance” to keep economic growth on track. But he doesn’t expect a lot more.

“Inflation is not nearly as weak as the market expects. A lot of the cuts that the market demands from the Fed were based on this really weak inflation expectation. Economic growth is slowing, but I think we’re going to avoid a recession for a long time.”

Could ECB Decision Be Fore-Runner To Fed Thinking On Inflation?

For those who care, Zidle’s caution on inflation isn’t very different from that espoused by ECB chief Draghi, who maintains the risk of recession in the euro zone is “pretty low”, contrary to market expectations. He also said policymakers at the governing council did not discuss rate cuts on Thursday despite holding their meeting against the backdrop of a seven-year low in manufacturing activity in Germany, the region’s largest economy.

That the ECB could think so differently from the markets is worrying to some analysts who wonder what the Fed will say Wednesday when it comes to its turn.

“Europe’s got some significant problems with its economic landscape, and the commentary from the ECB’s Mario Draghi is not very encouraging.”

Stefan Gleason, president of Money Metals Exchange, notes that it’s “unusual” for the Fed to begin a stimulus campaign with the stock market already at or near record highs, when its historical habit was to wait for the rally to break down and for recession indicators to flash before coming to the rescue.

But Gleason also says the present environment may be different: “What appears to be driving central bankers’ preemptive dovishness is their belief that inflation is not only tame, but too low. They want to push inflation rates higher, above even their stated 2% target for a prolonged period.”

For gold longs, Thursday’s sharpest price slide since July 5 in the yellow metal was reflective of the disappointment in the ECB action. Both and retraced some of those losses in Friday’s Asian trade, holding above $1,416 an ounce, in anticipation of the coming Fed move.

Investing.com’s Daily Technical Outlook, meanwhile, has a “neutral” recommendation on gold, projecting a top-end resistance of $1,451 in the near term.

Eight killed in quake and aftershocks in ...