After A 12-Day Selloff, Can Natural Gas Turn The Corner?

The trend is your friend, we often hear. And the trend doesn’t advocate being bullish on now, especially in a market plummeting with the velocity of a space shuttle returning to earth.

But is the futures play in America’s favorite clean fuel just going to be all crash and burn? Or is there a chance to build a new long position that could take off again?

A number of analysts are veering toward the second eventuality, though the consensus is the market should be allowed to shake out all the weakness that remains after 12 straight days of losses.

As the market awaits the U.S. Energy Information Administration’s gas storage numbers for the week ended Sept. 27, Dan Myers of Houston-based consultancy Gelber & Associates is among those watching to see if the on New York Mercantile Exchange’s Henry Hub will hold to its $2.20 support.

Analysts tracked by Investing.com have forecast that U.S. utilities likely injected 105 billion cubic feet (bcf) of gas into last week. That would be significantly higher than the 84 bcf storage build in the previous week to Sept. 20.

Gas stockpiles have risen more than forecast in four of the past five weeks, despite unseasonable warmth in the fall season that has prompted homes and businesses in the United States to continue using air-conditioners for cooling—a boon to gas producers feeding utilities. 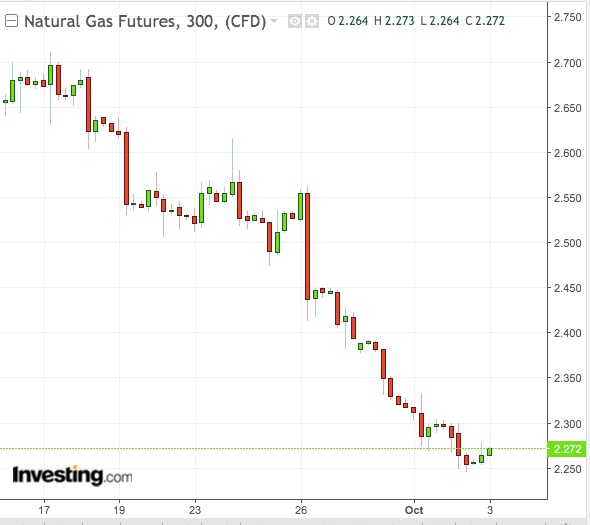 The weighty stock situation, caused by record high gas production, has, however, caused Henry Hub futures to fall from grace since their last settlement higher on Sept. 16.

A 15% rout in 12 days isn’t exactly shocking for , called the Wild West of Commodities by those who still remember its bronco-like gyrations, last seen during the winter of 2018.

Some of that volatility may return, with the weather poised to turn cooler in coming days—triggering the possibility that utilities may be burning more gas again, this time to feed heating demand.

Myers alluded to this possibility in his market note on Wednesday:

“Builds are expected to pull back in the next report due to this week’s mix of last-minute cooling demand and early season heat.”

“The market may be coming to the realization that it can’t depend on prices to stay this low for that long after last month’s rally demonstrated how fast things could turn around.”

Myers said low prices have taken their toll on gas and liquids producers, and the global economic uncertainty that weighs on oil prices may actually be bullish for gas if it causes the Permian and other oil-focused plays to slow associated-gas production.

“Once the market gets beyond the current oversupply situation and bearishness hounding the front of the curve, (it will coalesce with) contracts further out in 2020 (that) have been holding their ground in recent days.”

But Some Say Weather Not A Game Changer For Now

Dominick Chirichella, director of risk and trading at the Energy Management Institute in New York, said that while weather will not exactly be a game changer at this stage of the market:

“A refreshing shot of cooler air finally makes it into the South for days 6-10, but warmth rebuilds Central/East for days 11-15.”

“Temperatures will be above normal across the Central/Eastern U.S. during the day 11-15 period. Modest cool anomalies are expected across the Northwest and along the northern California Coast.”

Scott Shelton, energy futures broker at ICAP in Durham, North Carolina, meanwhile, raised caution around a sudden price snapback that could be triggered by a stampede in short-covering by traders rushing to close out bearish positions.

“The markets can make strange moves around this time of the year with the spreads in large contango in the front and backwardated in Q1.”

Contango refers to commodity market situations where the front-month trades at a discount to the subsequent month, creating a loss for an investor switching positions farther out. Backwardation is the opposite of contango, creating a potential profit in such switching.