A Nickel for Your Thoughts: Demand For This Metal Growing

The price of nickel has run up to a five-year high of late, defying softness in the rest of the base metal complex. 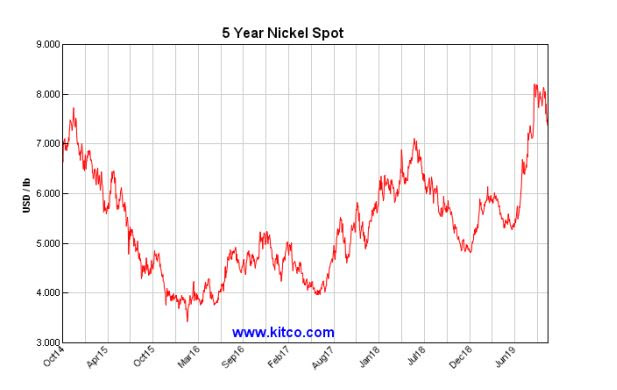 The reasons are both simple and complicated. The price of nickel doubled in two years, from US$4 per pound in August 2017 to US$8 per pound a few weeks ago. The reasons: 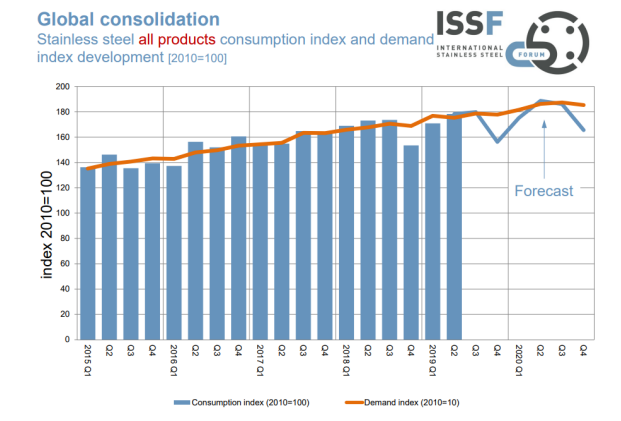 In the first half of 2019, for instance, Chinese stainless-steel production was up 8.5% year over year. (As the chart suggests, forecasts predict softening of demand in the current quarter.)

· China makes most of the world’s stainless steel. And China gets the nickel for that steel from its own mines as well as mines in Indonesia and the Philippines, many of which produce a low-grade, high-impurity ore called nickel pig iron (NPI). NPI production has ballooned over the last decade, enough that as of 2020 the world will get more of its nickel from NPI than from conventional nickel ores. However, this reliance on NPI brings with it a few problems.

· Indonesia will implement a ban on nickel ore exports at the start of 2020. This has been in the works for some time but until a few months ago the ban was not scheduled to take effect until 2022. Indonesia produces roughly ~12% of global supply, so this ban is significant. The idea is to push the development of domestic smelters, which would keep more of the resource upside in country versus exporting raw ore. This is in the works – the country already has 11 nickel smelters and 25 more are planned or under construction – so Indonesian nickel supplies should slide in the near term but recover within about three years. However, the smelters in China that relied on Indonesia’s nickel pig iron (NPI) ore will have to find feed elsewhere; the main candidate is the Philippines, where ore is generally lower grade. The only other option is to upgrade to processing Class I ores. Either move would increase costs overall, which supports a higher nickel price.

Batteries. Eighty percent of the world’s nickel goes into stainless steel, so steel certainly drives the market. But many of the batteries that power laptops, electric vehicles, phones, and even power grids require nickel. This has transformed nickel from a one trick pony to a two trick market – and if electric cars take off then nickel’s battery market will take off right alongside. Right now batteries consume 5% of global nickel but demand is rising rapidly and is expected to reach 8% by 2020. Vice-president of market analysis and economics for BHP, Dr. Huw McKay, says he sees a future where batteries and stainless steel become “equally important” nickel consumers. Global nickel demand currently sits around 2 million tonnes per annum; it is expected to grow to 6 million tonnes per annum by 2035 with batteries accounting for almost half of demand growth.

In addition, batteries cannot use nickel from NPI, as impurities are too high, so the battery factor has divided the nickel market into two parts – high purity Class I nickel and lower purity Class II. All of this has two important effects: it is bringing energy metal investors into the nickel space and it is underlining that NPI, which has been the dominant source of nickel growth for the last 10-plus years, will not solve the nickel supply gap going forward.

To address that second point and boost production of Class I nickel, China is developing several mines tapping into nickel laterite deposits. Nickel laterite is easy to mine but very difficult to process, requiring high pressure acid leaching (HPAL). Most analysts are highly skeptical that China’s planned HPAL facilities will come online anywhere near their projected timelines or budgets, as these facilities are notoriously difficult and expensive.

Because NPI has ballooned so in the last decade, explorers and developers have not looked for conventional nickel deposits. There is a true lack of development-stage nickel projects with conventional sulphide deposits that could be built to fill supply gaps.

Current mine-specific supply issues. The biggest producer of NPI in the Philippines just ran out of ore. The Ramu project in Papua New Guinea is temporarily suspended, which removes 35,000 tonnes of annual nickel supply. 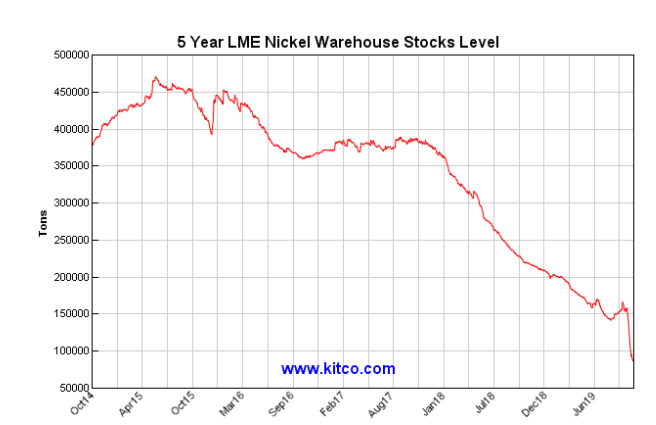 This is what happens when a market is persistently undersupplied. But as you can see, the decline accelerated in the last two years, and stockpiles dropped off a cliff a few weeks ago. 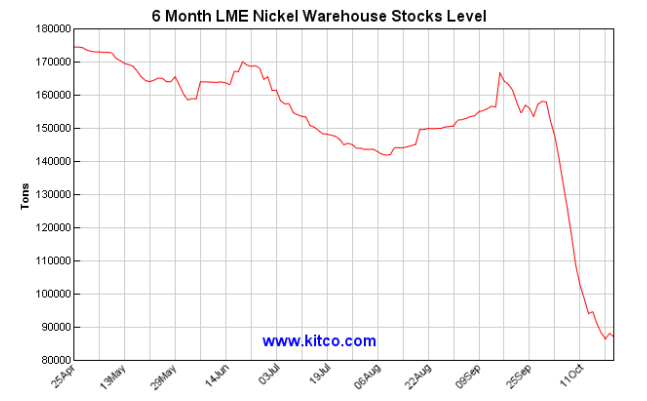 The cliff is likely the result of panic buying and/or stockpiling ahead of the Indonesian ban.

I told you it was complicated!

Complicated is normal for nickel, which has a long track record of extreme price moves. In 2008 a supply shortage drove the price as high as US$22 per pound before steel mills found substitutes, seven including manganese, and within 18 months the price was back at US$4.50 per pound. (The Great Financial Crisis likely exacerbated the price decline.) 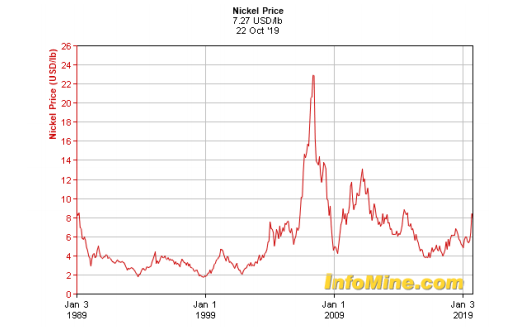 The key question on this side is: To what extent is speculation driving nickel?

If speculators are pushing the price up, entering the space now is risky because (1) speculative tides turn fast and (2) that turn would likely transpire in the next six to nine months. Indonesia’s ban comes into effect Jan. 1, so over the next six months the impacts start to play out.

It’s clear that stockpile drawdowns are at least in part because smelters and speculators have been stockpiling metal privately. That metal will be used or sold to ease any nickel price jumps.

If increased physical metal availability coincides with the absence of speculative upside pressure, nickel could turn down fast.

On top of all that, there are reasons to believe (1) stainless steel demand will weaken to end this year, (2) EV demand is taking longer to ramp than expected, (3) scrap usage is increasing, and (4) rising backwardation alongside falling physical premiums is a sign that actual demand is lower than perceived.

The fourth point above needs some explaining. In a tight market, limited stockpiles lead to backwardation – people paying more for metal today than in the future. Backwardation should only happen when the current physical market is very tight. If that’s the case, there should also be high physical premiums, which are extra amounts paid for actual metal now (rather than paper metal).

What’s weird about nickel is that premiums are down sharply, from $200 per tonne a few months ago to negative $50 per tonne today. It’s the first time premiums have ever gone negative in China and something that is very rare across the metals complex. European nickel briquette premiums are also down 80% in recent months.

The dark blue line below shows physical premiums. The light blue line shows the difference between current and three-month nickel prices; a positive Cash-3M is backwardation. 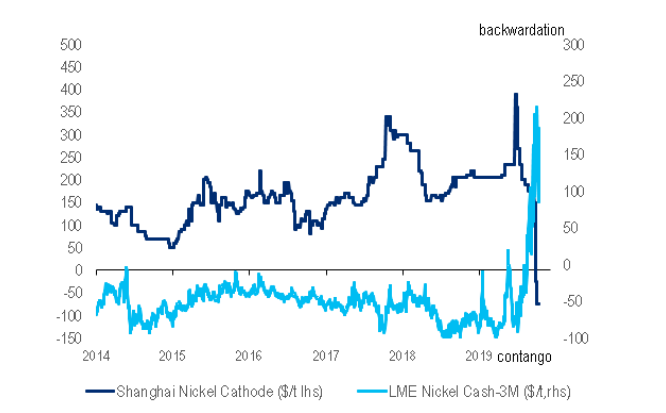 · The physical market is not that tight

· Speculation in the paper market is driving the price

· Speculation is not simply investors; nickel users and producers are also playing games (stockpiling) to boost the price. When they stop, the price will lose ground rapidly.

Nickel may or may not continue its bull run from here. The fact the physical premiums are so low when prices have gained so much and the paper market is in backwardation is definitely concerning, enough that I am not ready to enter the space right now. The fact that nickel spot price recently stepped back almost 10% reinforces my outlook.

However, in the medium and long term this is a market that has good opportunity. Stainless steel demand growth is reliable. The battery space will need more and more Class I nickel with each year. The pipeline of new projects is very limited, especially if you (like me) see China struggling with its nickel laterite output mines and HPAL facilities. 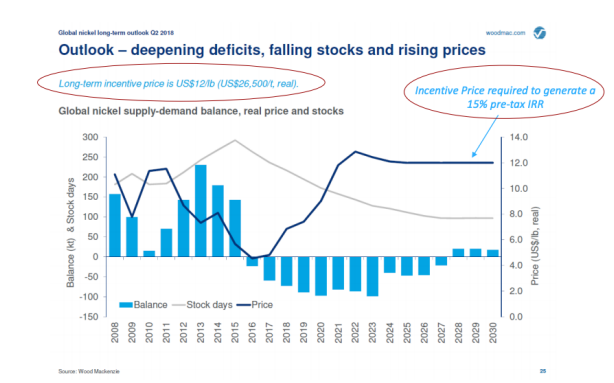 I might be wrong and my hesitation on entering now may mean missing out on near term upside, but such decisions are common in this sector!

An Elizabeth Warren presidency may not be ...