A Decade In Commodities: Wild Ride For Grains From Drought To Trump Policies

Grains had their biggest price bonanza of the decade when the worst drought in half a century almost decimated the U.S. , and crops in 2012 — a rare occurrence indeed to afflict all three major agricultural markets in one go.

Since then, each component of the grains sector has had its own wild ride, apparently driven by fundamentals. Yet, oddly, the same character has been behind the volatility in all three in recent years: U.S. President Donald Trump.

Back in 2012, more than 70 percent of the U.S. Midwest was in some stage of drought in July that year, the worst dry planting conditions in the United States since at least 1956.

While the drought sent grain prices soaring, the squeeze on yields and harvests were bad for farmers and consumers, as corn, soybean and wheat crops in the United States — the largest world exporter of those key crops — lay baking in fields, losing yield potential daily or being plowed under for insurance claims.

Grains Traded At Their Highest This Decade During The 2012 Drought

Ever the catalyst of market unpredictability, Trump sent soybeans to 10-year lows of around $7.91 per bushel in May this year as the U.S. trade war with China peaked. Until the trade spat really took hold in the summer of 2018, China had been purchasing more than half of all of its soybeans from the United States. 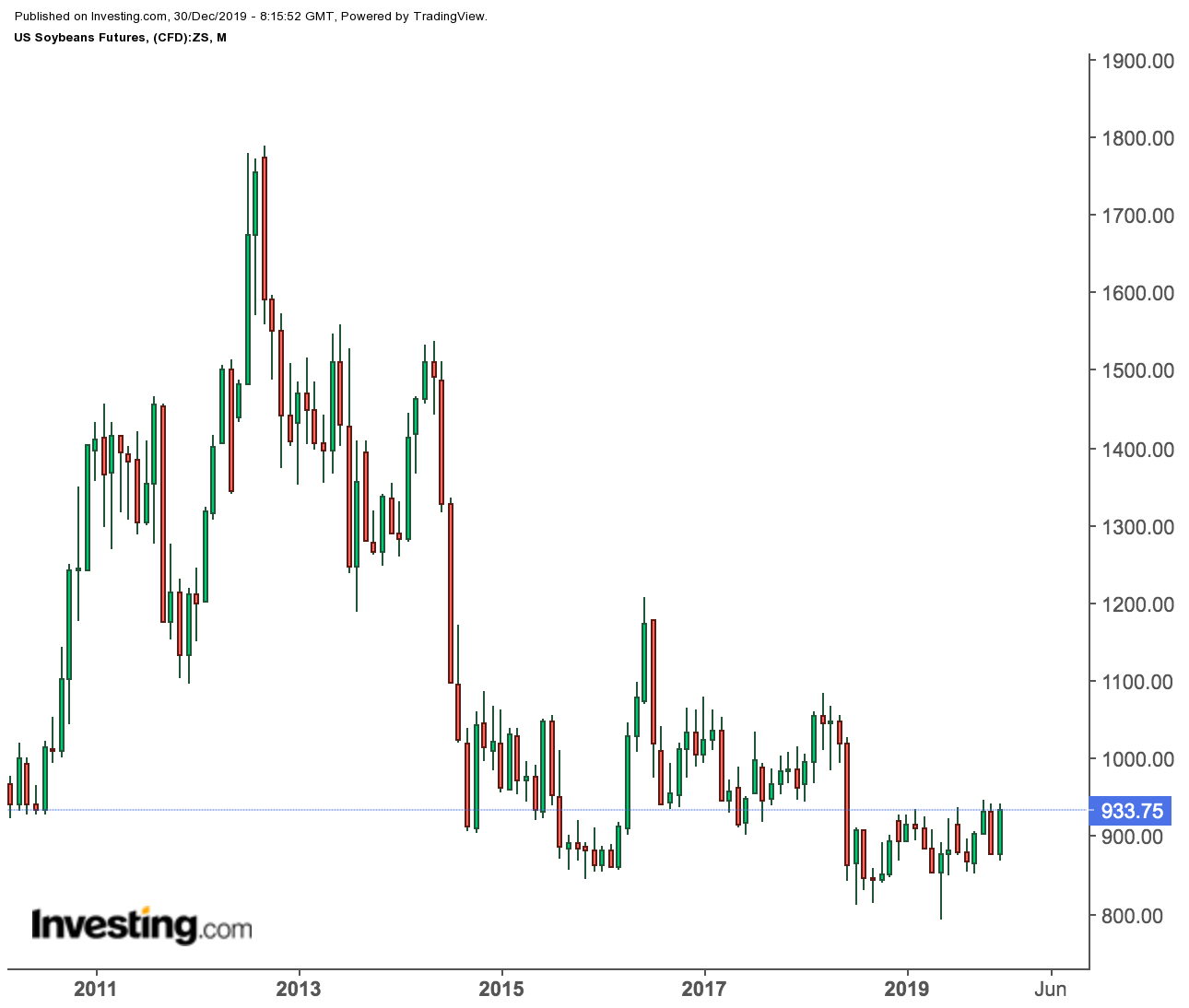 As China put up retaliatory tariffs of its own against the U.S. last year, Chinese imports of U.S. soy reached zero in August, September and October 2018.

A year down the road, things have gotten better for U.S. soy, with the Chinese rolling back their tariffs in a gesture that seems to indicate that a trade deal might be happening. Soybean futures traded in Chicago have recovered lately to around $9.41 per bushel.

No Certainty Over Soybeans Till China Trade Deal Is Signed

Yet, until the trade deal is signed, demand for U.S. soy isn’t exactly out of the woods yet.

With persistent reports about the Chinese being unhappy with Trump’s condition that Beijing commit in advance to buying $50 billion of U.S. farm products a year, there is no knowing what the compromise will be.

And the longer it takes for the deal to be signed, the more uncertainty for the soy trade, particularly with how Trump, who’s seeking reelection in November, will react.

China has also been ramping up soy imports from Russia. Last week, Russian media reported that the country is delivering soybeans to China by train for the first time, according to Chinese agriculture database CoFeed. State-owned enterprise China Oil and Food Corporation (COFCO) will receive 250 tons of Russian soybeans this month.

U.S. and Chinese officials have said they will begin negotiations on the second phase of their trade deal immediately after the first is concluded. Even so, Chinese Ministry of Commerce spokesperson Gao Feng said last week that Beijing “firmly opposed” the U.S. National Defense Authorization Act, which Trump signed into law this month.

China was mentioned 202 times in that legislation and U.S. lawmakers plan to confront China on a variety of threats and concerns, including sanctions on Chinese companies, Chinese efforts to infiltrate U.S. universities and research institutions and China’s Belt and Road Initiative. The act also makes it tougher to lift sanctions on telecom giant Huawei.

The defense act’s “restrictions on purchasing Chinese products and Chinese companies’ exports are bad examples of government intervention into companies’ normal operation and activities, which is the opposite of the U.S.’s values of free and fair trade. It harms international trade and global industry chain,” Gao said. “China will closely monitor NDAA’s impacts on Chinese companies and take necessary measures to protect Chinese companies’ rights.”

Aside from the disruption to the soybeans trade, Trump also upset the corn lobby a week ago by giving the upper hand to oil refiners in their bid to reduce the content in gasoline.

Corn is hovering near 3-month lows of around $3.89 per bushel, though that is still markedly higher than the six-year low of $3.01 hit in August 2016 from a global glut in corn supplies that year.

The Trump administration finalized U.S. biofuel blending requirements for 2020 last week, leaving a key part of the rule unchanged from an earlier proposal that the corn lobby had criticized as inadequate to help struggling farmers. 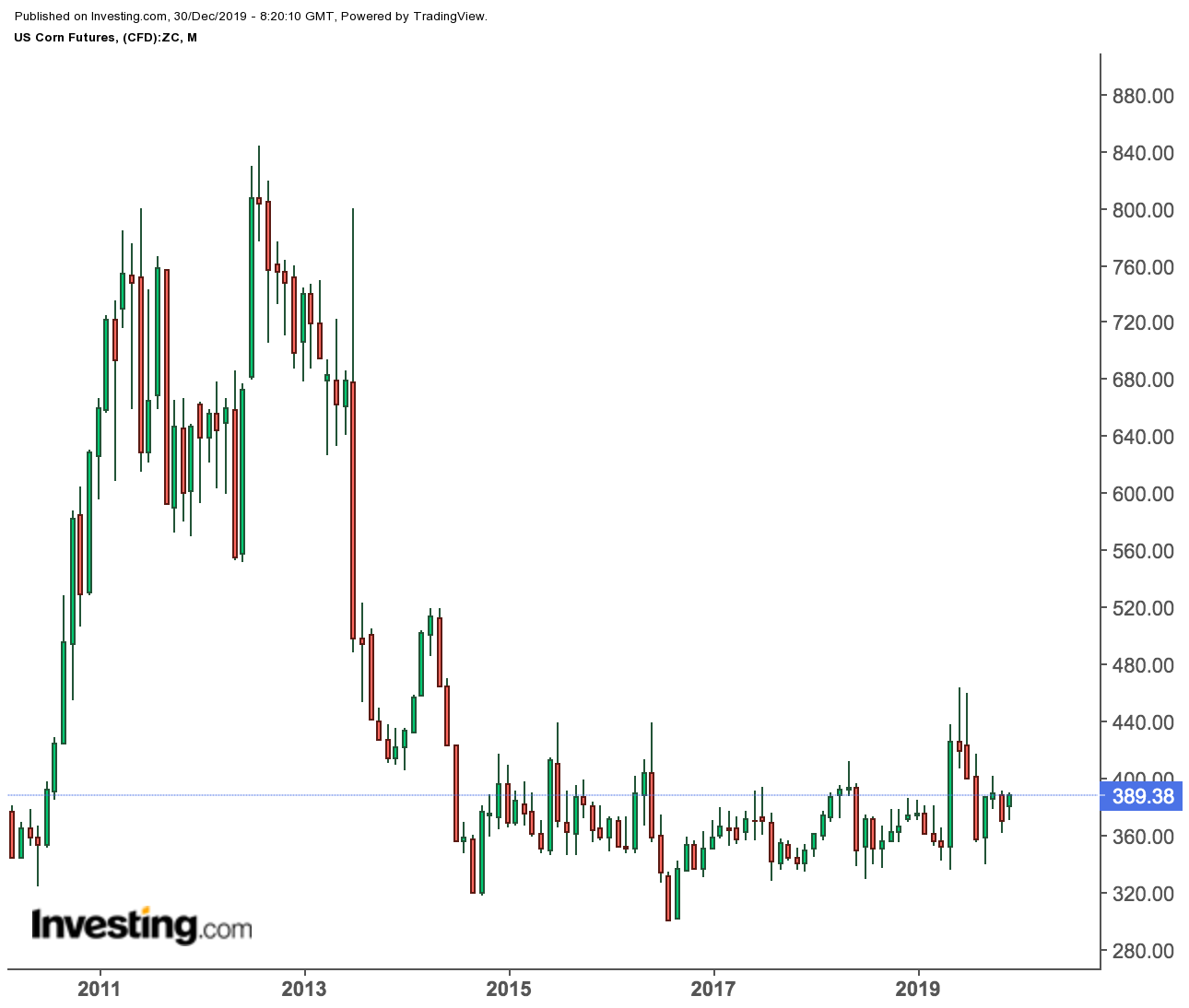 The move is destined to anger biofuel industry officials and corn-state senators who had pushed hard for changes until the 11th hour, potentially threatening President Donald Trump’s support among farmers ahead of next year’s election.

Under the U.S. Renewable Fuel Standard (RFS), the Environmental Protection Agency is charged with setting biofuel blending requirements for the refining industry to help farmers by boosting demand for corn- and soybean-based fuels, while reducing U.S. dependence on .

Trump and top White House officials directly intervened in discussions about the biofuel requirements this fall in an attempt to appease farmers, whose support Trump is counting on in November’s presidential election.

“Apparently President Trump doesn’t care about his promise to Iowa’s farmers,” said Iowa Corn Growers Association President Jim Greif, adding that the lobby “will not stop fighting for market access for corn in all forms.”

As for wheat, during the summer, Trump made derisive remarks about U.S. sales of the grain to Japan, describing wheat as a poor trade exchange for the cars the Japanese sold to the United States.

The Trump administration did get a trade agreement with Tokyo earlier this month that paves the way for cheaper American beef and other agricultural products to Japan. Tokyo, in return, won cuts in U.S. tariffs for certain manufactured goods, such as machine tools and musical instruments.

And wheat prices are at near 2-½-year highs of $5.58 per bushel now because of drought again — this time in Australia and Russia. 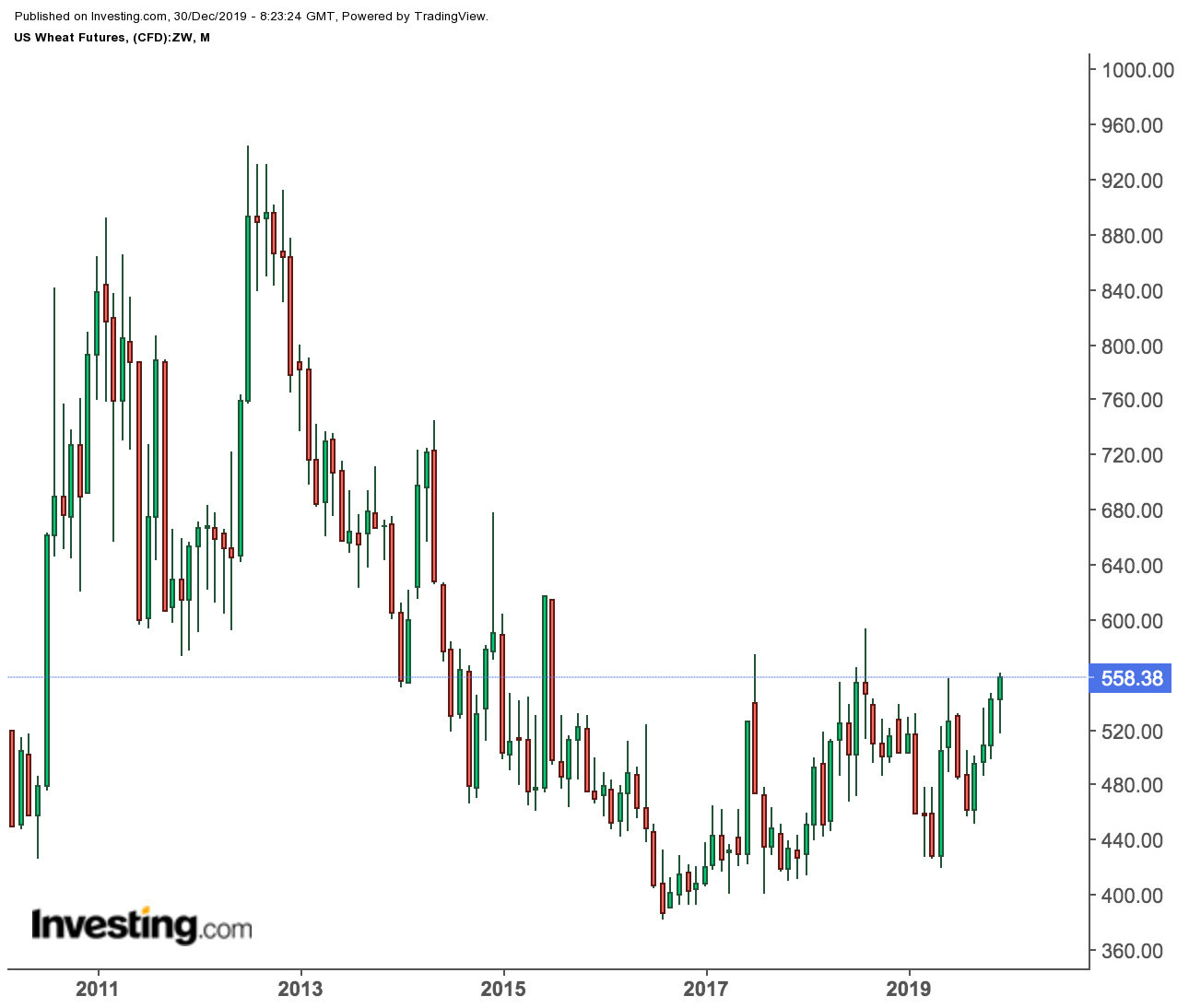 Yet, when Trump made his remarks about wheat in August, the market was at around three-month lows of around $4.56 per bushel, prompting The Oregon Wheat Growers League to say it was “profoundly disappointed” with the president.

“We appreciate many of the things that the Trump administration has done for agriculture, but we sincerely hope that the President will take the time to learn about and appreciate the great success story and heritage that has been built between wheat growers in the U.S. and our customers in Japan,” the League said in a statement.

It suggested total ignorance on Trump’s part of the relationships between Japanese millers and U.S. farmers that began in 1949, when a trade delegation was set up to investigate the expansion of wheat sales.

Since then, Japan has become the No. 1 market for U.S. wheat and the No. 2 market for soft white wheat grown in the Pacific Northwest, the League said. U.S. wheat has a 50% market share in Japan.

“This is not a situation in which they’re simply buying what can be close to $1 billion worth of wheat a year for political reasons,” added Steve Mercer, vice president of communications for U.S. Wheat Associates, the overseas marketing arm for the industry. “This is a need and a desire on the part of their industry to purchase U.S. wheat.”

Japan has purchased an average of 2.91 million metric tons in each of the last five years, Mercer said.

“The President claims to be continually supporting farmers, but started a trade war, and then directly attacks the bread basket commodity of the United States.”