A Decade In Commodities: Palladium Is The New Gold In Precious Metals Shakeup

Stranger things have happened in a decade, so it’s probably not surprising that as we reach another ten-year marker in precious metals, gold is still the number one hedge for inflation and the world’s troubles but it’s palladium that wears the crown — at least price-wise.

In a milestone few might have anticipated so early into the decade, gold got to a record high of nearly $2,000 an ounce in less than two years of its 2010 debut.

It was a phenomenal move, considering where the yellow metal was when it began that journey: $1,096.20. 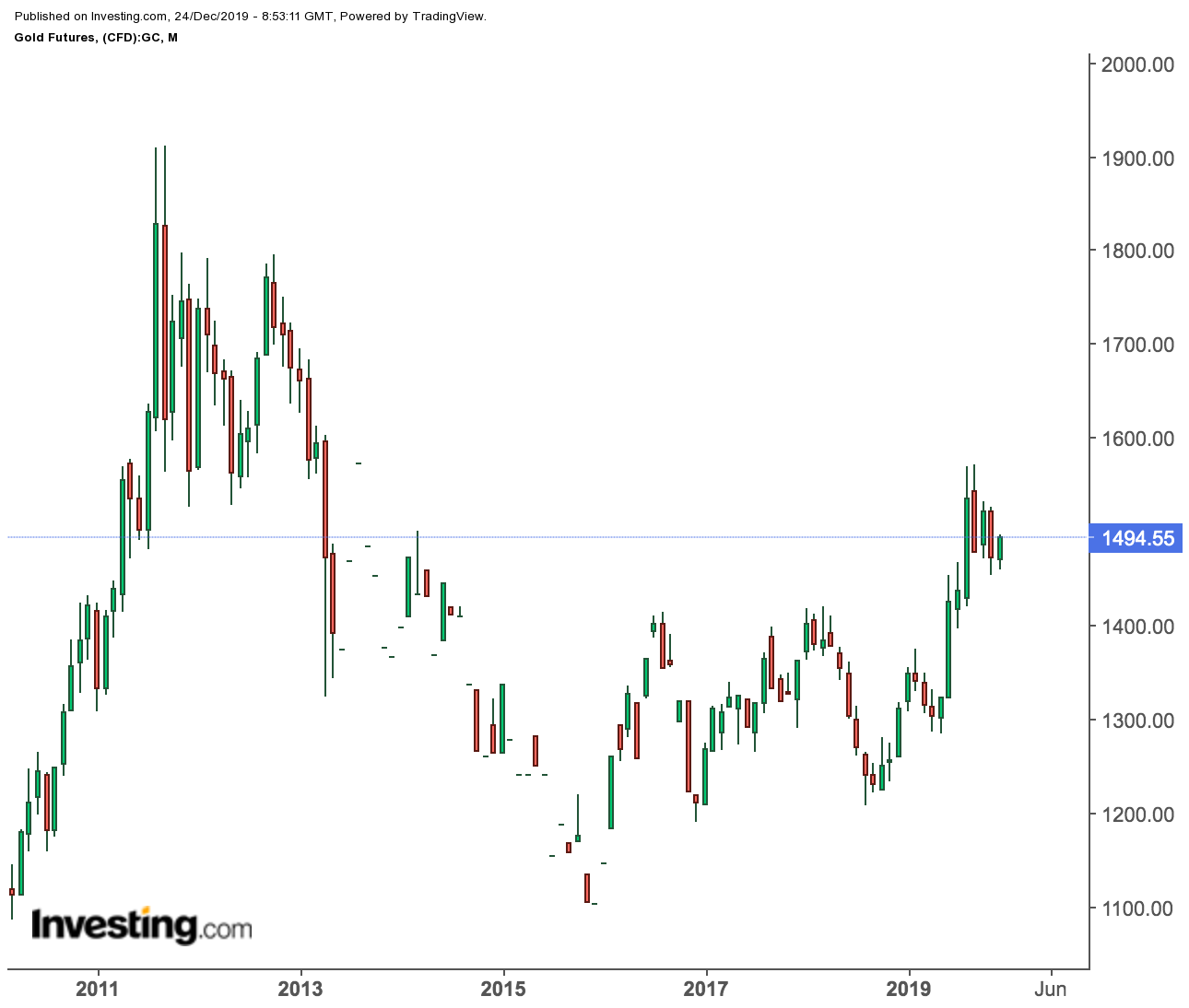 Palladium had an equally riveting story. While the auto-catalyst metal took the full decade to overwrite gold’s peak, it rose an average of $140, or 23%, each year — unprecedented for any metal — before reaching the landmark $2,000.50 level a week before Christmas Eve 2019.

Gold and Palladium Have Another Target To Beat: Platinum’s Record

And while palladium and gold outdid each other, neither could match within this decade the all-time high reached by another precious metal even before the 2009-2019 era. 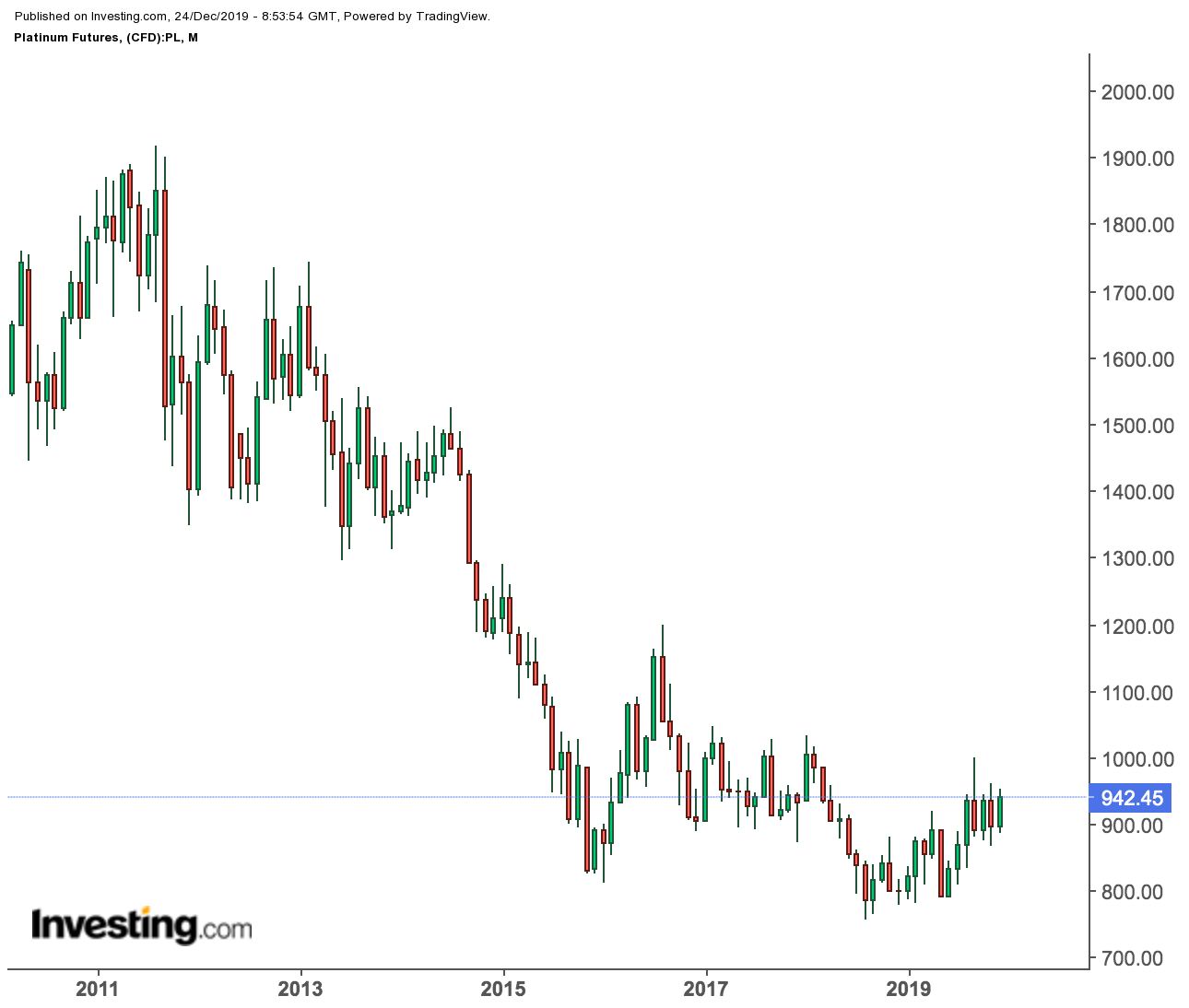 And that metal is , often described as a sister-metal to palladium. Platinum had gotten to as high $2,276 per ounce just before the financial crisis of 2008. It’s a record not many may remember or even know, given that an ounce of platinum fetches just about half of what an ounce of palladium does these days.

And therein is the other story in precious metals this decade: price disparities.

Gold At Least $400 Below All-Time Peak

Gold is at least $400 an ounce less than its record high. But it has also never fallen below $1,000 throughout the decade, demonstrating its standing as an insurance against price pressures and political and financial risks. And gold is finishing 2019 with double-digit gains, with its up 16% on the year and nearly 14% higher.

More telling is where the yellow metal is at currently: Back to within striking distance of $1,500. The $1,500 level is a key bullish perch for gold, and is seen as make or break for its continued rally in 2020. That gold can stay within reach of $1,500 — despite the Federal Reserve saying earlier this month it was ending rate cuts for now, reintroduced after a four-year hiatus — is indicative of its rock-solid fundamentals.

Palladium Beats All Commodities in 2019 With Its Returns

Compared with gold, palladium has lost just about $120 from its Dec. 17 record high. For the year, palladium is up 55% on its and 48% on its — higher than any commodity. While the relatively-better price performance should put it on a higher standing, palladium is fundamentally nowhere near as superior as gold. 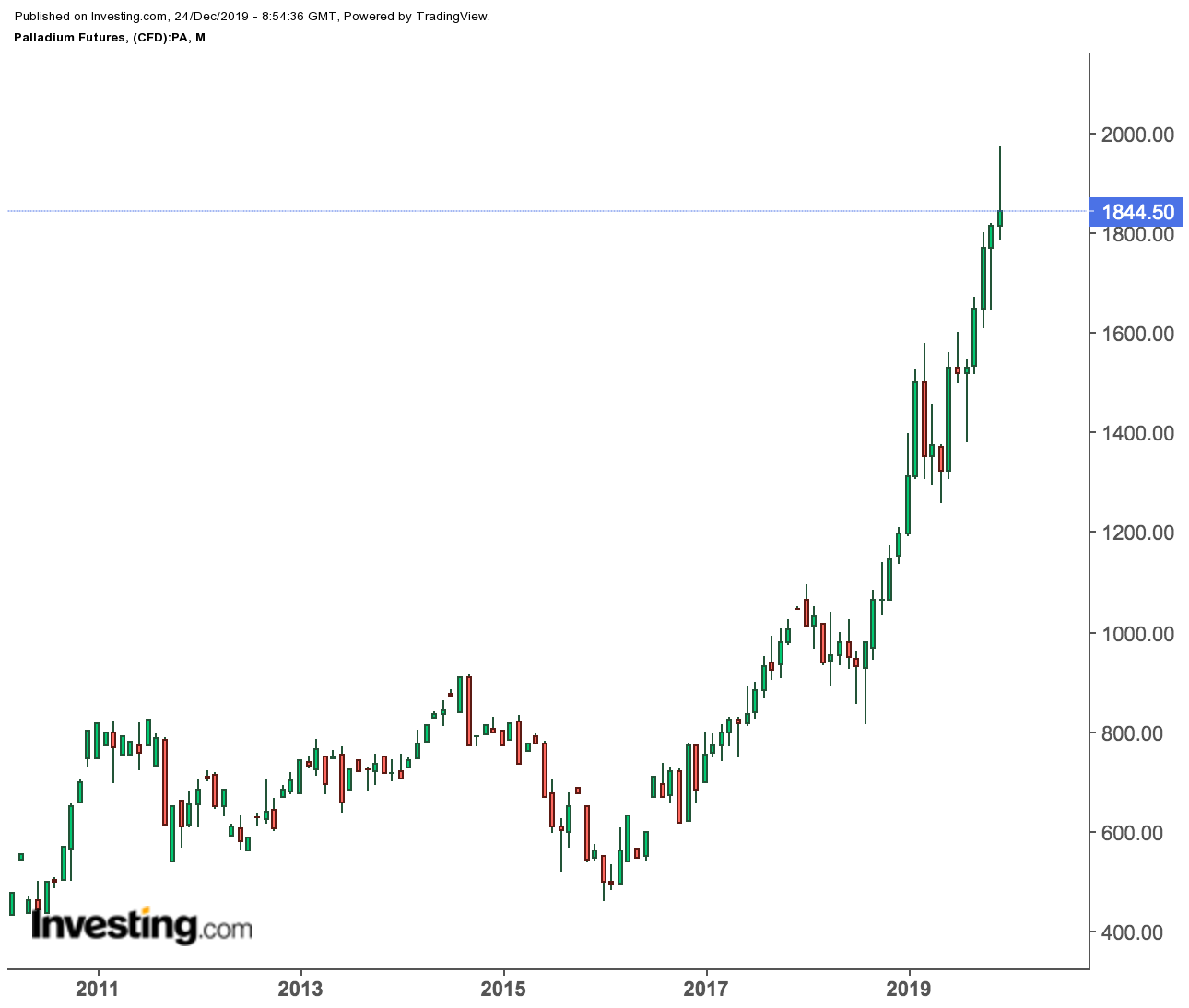 Much of its 2019 rally has been due to a single factor: fear that the tight mine supply situation out of South Africa and Russia will worsen, impacting production of gasoline cars that rely on palladium to purify their emissions. But for palladium to reach even loftier heights, the auto industry will also have to continue expanding without much disruption in the new decade.

At the moment, there’s simply no guarantee of this, given the economic challenges brought by each decade. There’s also the question of automotive evolution, with electric cars likely to have greater market share in the coming years along with the growth in environmental concerns that could put further curbs on fossil fuel emissions.

So, in the final mix, the question is where could each of the leading precious metals be trading in the near future?

Gold Could Seek $1,800; Palladium May Hit New High Or Consolidate

Gold could attempt $1,700-$1,800 in 2020, underpinned by the likelihood of continued trade disputes and other tensions brought by U.S. President Donald Trump in the year where he’ll be seeking reelection. Even with the potential for a partial deal with China, few investors are willing to bet that all will be safe with Trump. Case in point: gold’s resilience at near $1,500 this week despite stocks on Wall Street hitting record highs on the China deal optimism.

Gold could also break out in the coming year if the Federal Reserve goes back to cutting rates again to preserve U.S. growth. The American economy is already at a record 11-year expansion streak, and some stimulus may be necessary to keep it chugging along.

Palladium could extend to new record highs above $2,000 if there’s another supply squeeze like this year. But if output at South African and Russian mines steadies in 2020, the auto-catalyst metal could fall to as low as $1,500.