A Decade In Commodities: No Word Yet On Peak Oil Or Return Of $100 Crude

Another decade has gone by in commodities, with none the wiser on whether the world is any closer to hitting peak demand or production in oil and a return to $100 pricing on a barrel of crude.

As the Saudi-led Organization of the Petroleum Exporting Countries (OPEC) enters its sixth decade, oil markets have nary a clue either on how much longer the world’s only surviving commodities cartel — and the most powerful since its 1960 founding — will go on. In fact, given the demands made of OPEC in this decade alone, it’s a miracle that it still exists and continues to positively influence crude prices.

“For almost as long as oil has been around or traded as a commodity, the world has wondered how long it’ll be before we run out of fossil fuels or reach a point where they’ll be made redundant by newer energy sources,” said John Kilduff, founding partner of New York energy hedge fund Again Capital. He added:

”And enmeshed within this argument on fossil fuels, is the very future of OPEC and Saudi Arabia, as the custodian of the cartel and purportedly one of the world’s largest reserves of crude.”

“Suffice to say, after countless debates that continued through this decade, we are nowhere close to credibly answering any of these.”

“Peak oil production” refers to the hypothetical point at which global production will hit its maximum rate, after which production will start to decline. It is the most bullish case scenario for oil, especially if renewable energies were still in short supply then.

The prospect of “peak oil demand” would end an expansion that dominated the past century and comes as investors and governments face pressure to move away from fossil-fuel-based economies. It presents the most bearish case scenario for fossil fuels. The Paris-based International Energy Agency rekindled the theme in November, predicting that global oil consumption will plateau in about a decade.

What’s most ironic is that a couple of weeks after that IEA forecast, the peak demand theory was championed at an event in New York by Andy Hall, one of the most successful oil bulls of his generation. A “perma-bull,” Hall had made hundreds of millions of dollars in profit for his clients and himself over a 30-year career, selling the theory that oil demand, and conversely, prices, could go only one way — up.

“Except that we knew logically that couldn’t happen,” Hall said at the New York event, stunning his audience as it dawned upon them the “bull” they had bought over the years from traders like him. Hall was not apologetic at all for his earlier calls for infinite oil consumption, saying “oil demand has grown exponentially since the end of World War II … it was just a given that oil consumption would grow from here to eternity.”

But that story has to change now because of technology, electric cars and renewable energy, said Hall, projecting peak demand by this decade itself.

“There’s a non-zero chance that by 2030, we will see a plateauing or decline in global oil consumption,” the retired hedge fund mogul said, even as he acknowledged the continued boom in U.S. shale oil production and discovery of new supplies in Brazil, Norway and Guyana.

$100 Oil Could Return, But Only Briefly

Hall also predicted something else that refers to the other part of this decade’s story in energy — $100 oil.

“Could we see $100 oil again? Absolutely,” he said. “That would only be temporary and hasten the ultimate demise” of peak demand.

It’s a story that has its roots in the 2008 financial crisis, making a comeback in the ensuing years before the U.S. shale oil revolution put paid once and for all to such triple-digit pricing for crude.

From Financial Crisis Highs Of $147 …

The worst market meltdown since The Great Depression had sent U.S. , then the global benchmark for crude, from record highs above $147 per barrel in July 2008 to around $32 lows by December of that year. 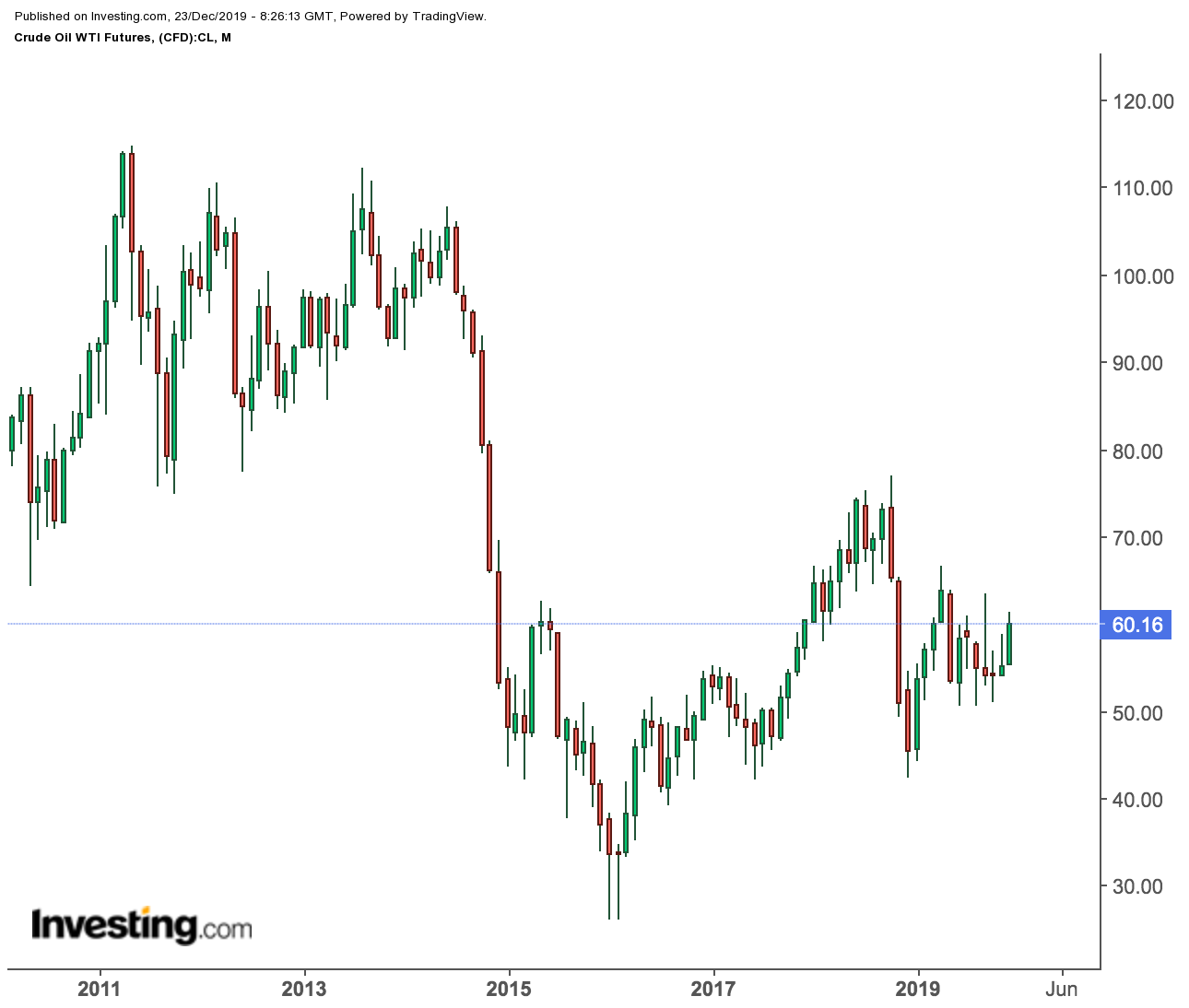 But the post-crisis recovery in oil was also such that the oversold market catapulted back to $80 levels by the time 2010 began.

The following year was something that no one in the oil market could have predicted: the Arab Spring protests of 2011 that laid the seeds for the Libyan Crisis that culminated in the North African country’s civil war, foreign military intervention, and the ousting and death of its longtime dictator Muammar Gaddafi. One of OPEC’s most important producers at one time, Libya’s oil output went from 1.5 million barrels per day to almost zero by the end of 2011 when Gaddafi died.

Structural changes in the oil market were also afoot by then. Pipeline constraints had severely restricted crude’s movement in the United States, making WTI no longer tenable as a world benchmark. U.K. took the top spot from its U.S. peer. The squeeze caused by the Libyan outage sent Brent spiraling back to above $100 a barrel by January 2011, where it stayed virtually unchallenged for 3-½ years. 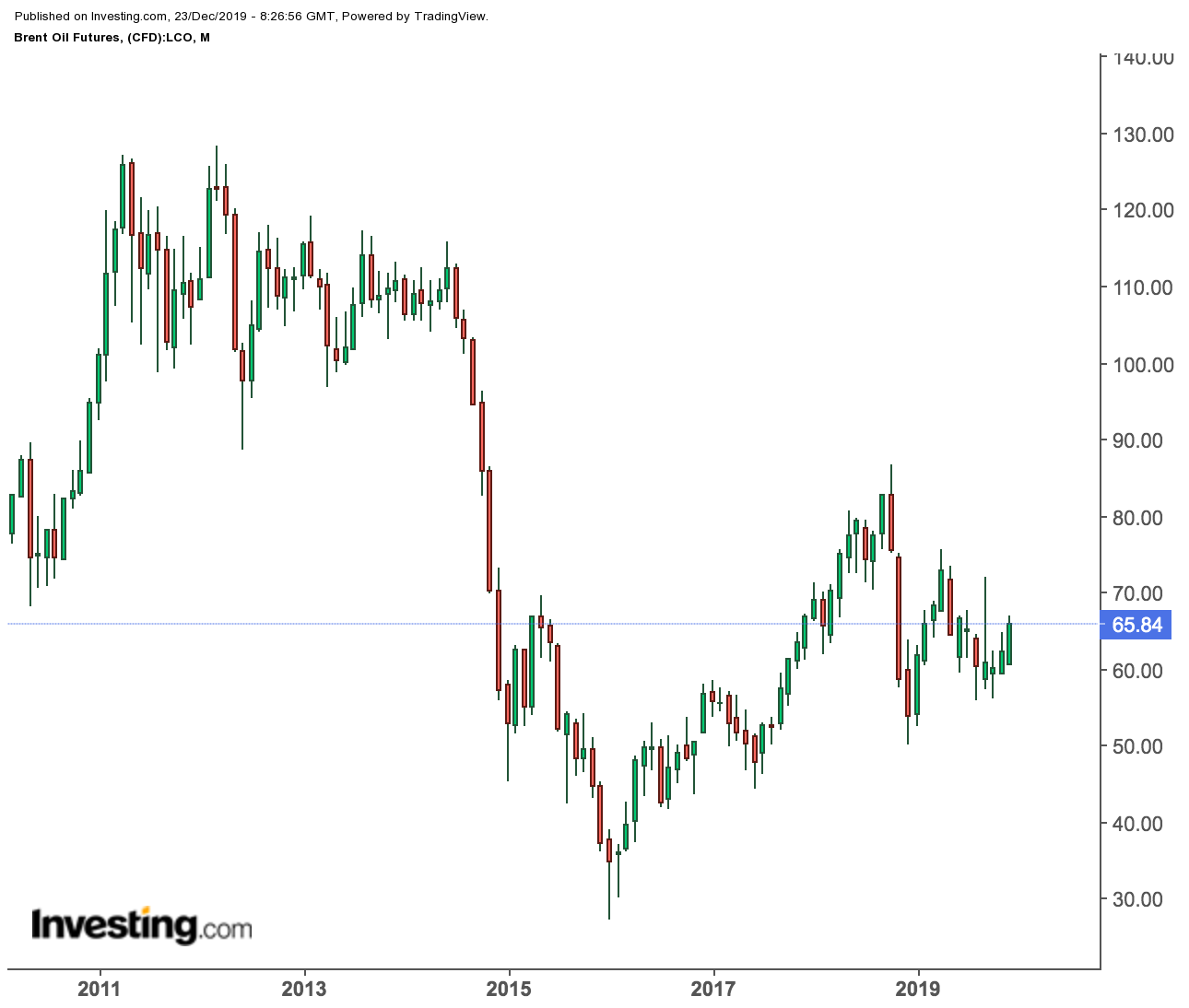 Then came the second oil price shock of the decade — this time to the downside.

Hydraulic fracturing, or “fracking,” as the popular shorthand goes, unleashed a torrent of oil from shale rock formations in the United States, transforming by the summer of 2014 both U.S. reserves of crude as well as the country’s position as an oil producer. The power of oil’s supply-demand had suddenly shifted from giants like OPEC and Saudi Arabia to a rag-tag band of independent drillers across the United States that was growing by the day.

Dismissing the shale threat initially as fleeting, the Saudi response was to “pump like no tomorrow” and flush the phenomenon out of the market. At about the same time, Iran, the world’s fourth largest crude exporter, then under U.S. sanctions on the export of its oil, was negotiating a new nuclear deal with President Barack Obama’s administration.

With Iran back in the market and the foolhardy and myopic Saudi response to the shale threat becoming too evident, crude prices sank like a stone as cheaply fracked oil drove Brent to around $35 a barrel by December 2015 and WTI to $26 levels by February 2016.

The Saudis then pulled one more rabbit out of the hat: an unprecedented production cutting pact with Russia, then the largest crude producer. The OPEC+ alliance was then born, grouping OPEC’s 15 original members then with another 10 producers led by Russia.

Committing to a production cut of 1.2 million barrels per day in its first iteration and agreeing this month to deepen that reduction to as much as 2.1 million bpd or about 2% of world supply, the alliance is basically what has saved oil prices for the day. The United States has, meanwhile, become the world’s No. 1 oil producer and a net oil exporter on top of that, shipping more petroleum products than it imports since lifting an embargo on crude shipments in 2015.

Over the last three years, OPEC has had a different challenge in managing crude prices. While President Donald Trump has put new sanctions on Iran and Venezuela that have tightened world crude supplies to OPEC’s advantage, he has also steadfastly fought the cartel for fear its actions could cause a spike in U.S. pump prices that could derail growth.

With the global infamy from the 2018 murder of Saudi dissident journalist Jamal Khashoggi and the embarrassing attack on its oil facilities in September this year still haunting the Saudis despite the listing success for their national oil company Aramco (SE:), $100 oil isn’t on the kingdom’s mind either.

Chart Of The Day: Trading Oil Amid ...