A Decade In Commodities: In Base Metals, Dr. Copper Becomes Dr. Who?

For this almost-finished decade, every sector in commodities has a different story to tell. In base metals, it’s about copper: the metal that’s supposed to tell us everything we need to know about the economy just through its price. Its diagnostic ways are so fabled that it’s even sometimes called Dr. Copper .

Yet, there’s nothing about the economy that copper prices have gotten right this decade. In fact, the disconnect between the red metal and the economy has been so great over the past ten years that to the uninitiated, the mere utterance of Dr. Copper might elicit the response: “Dr. Who?”

A look at the world economy and copper prices will tell why.

Notwithstanding the 2008-2009 financial crisis, world gross domestic product still grew by a compounded 29% in the previous decade, or at an average clip of 2.9% per annum, World Bank data shows. Quite phenomenal for a period that contained the greatest recession in history.

Copper prices, in comparison, started January 2000 at 86 cents a lb on the and finished December 2009 at $3.33. That’s a whopping 287% growth. Clearly, copper in this era wasn’t just reflecting the economy — it was front-running it. 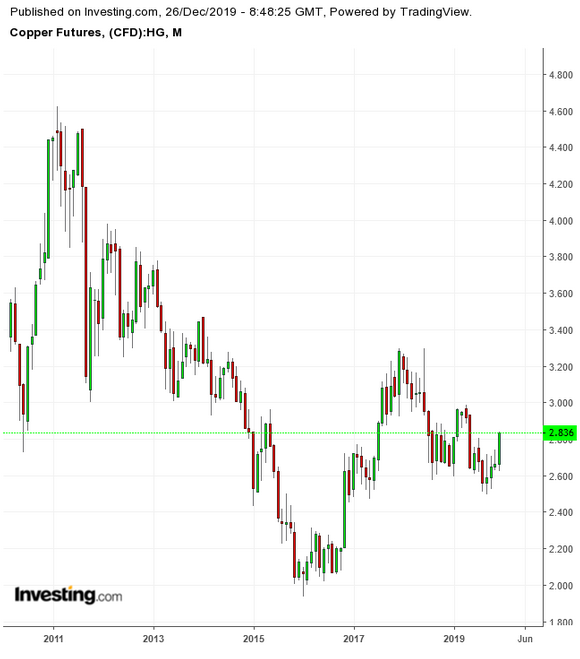 But over the next ten years, the story unraveled.

While world GDP growth was almost exactly the same this decade as the last — expanding a compounded 30%, or an average of 3% per annum, between 2010 and this year — copper took a different path.

Copper Went From Hero To Zero In Just Two Decades

In a span of just two decades, copper as the world’s leading industrial metal, had gone from hero to zero. Why the total collapse in correlation?

One reason: the latter half of this decade has been filled with fears of a global economic slowdown — which although they haven’t panned out, have put a cap on copper prices. The Trump administration’s trade war with China, for instance, has been one of the biggest antidotes to higher copper prices.

Financial Times columnist John Dizard said in an October post that copper “tried, feebly, to get out of its sickbed at the end of the summer, only to fall back again after the middle of September.” Using , a more globally-referenced benchmark for copper, Dizard noted that the market could barely keep above $5,600 a tonne in early October. 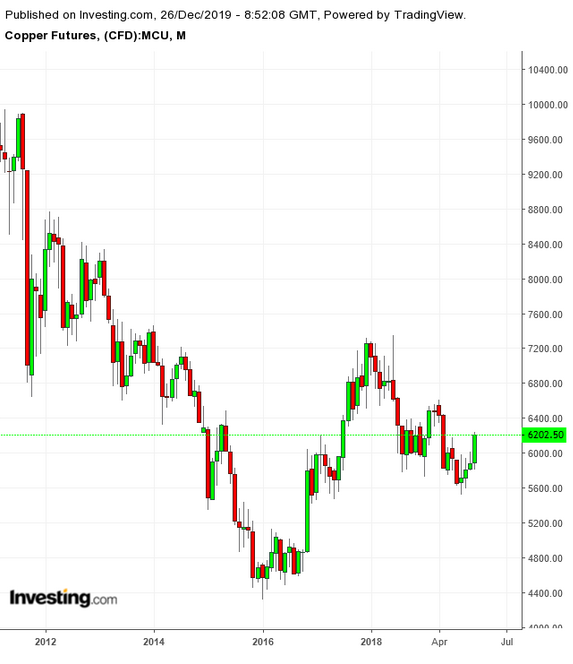 The $5,600 level covers the cash operating costs for existing mines, but was nowhere near enough to draw investment to new mines, said Dizard, adding that this was “assuming someone has found the stuff, measured the deposit, laid out transportation and water supplies, and arranged all the permits.”

Jeffrey Christian, a renowned consultant in the global metals industry, points to another problem. “No one wants mining, but they want the product,” says Christian, who speaks from 33 years of experience in running the New York-based metals statistical and advisory service CPM Group.

“We are working on three continents with governments and industry associations to see what can be done about [the lack of new mine investment]. Now institutional and retail investors are simply not investing in junior mining companies, because they have lost money at it for so long.”

One of those analysts, Paul Gait at Bernstein in London estimates that copper needs to be priced at $8,800/tonne, or 40% above current levels, to provide that fix.

Some Think The Coming Decade Will Bring Copper’s Renaissance

Other industrial metals analysts at Goldman Sachs, Morgan Stanley, Bank of America, Citigroup and Jefferies think copper and the economy will sync again in the decade beginning 2020, because low inventories, supply constraints and better demand will boost prices.

Jefferies, another U.S. investment bank, is just as optimistic about the red metal’s chances in the coming year. Current supplies of copper won’t meet “even a modest cyclical recovery in demand” in 2020, Jefferies analyst Christopher LaFemina was quoted saying by Bloomberg.

We’ll have to see if these views pan out, and whether Dr. Copper will go back to foretelling the economy. 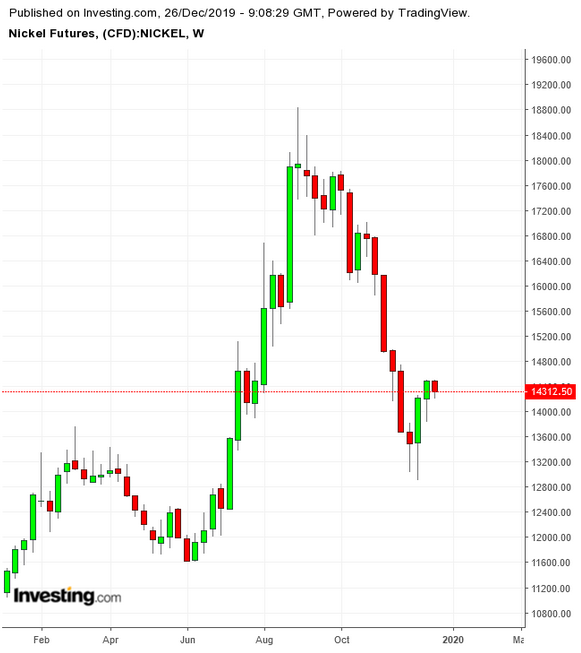 For now, 2019’s biggest base metals is — whose prices are up 34%, boosted by ramped-up demand for electric vehicle batteries and an Indonesian ban on nickel ore exports.